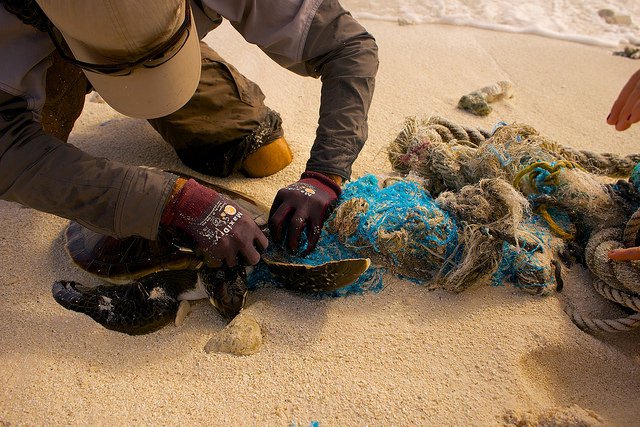 Ghost nets — the name given to abandoned or discarded fishing nets — are dangerous traps for marine life and are a particular problem on Australia’s far north coast.

But one group, GhostNets Australia, is dedicated to removing the nets and cleaning up the ocean. And a group of indigenous artists are turning those nets into powerful works of art.

The area near Cape York and along the Gulf of Carpentaria is one of the last safe havens for endangered marine life, including dugongs, sawfish and turtles, which sadly make up 80% of animals found caught in the nets.

GhostNets Australia has rescued 300 turtles and removed 13,000 nets from beaches and esturaries, accourding to its website.

Read more: How a College Dropout Plans to Rid the Oceans of Plastic

So where are all these nets coming from? Less than 10% are actually from Australian fisheries. Data suggests that the majority are originating from Indonesian waters where the fishing industry is largely unregulated and trawling is still allowed.

During monsoon season strong winds and tides wash the nets south to Australian shores where they cannot escape. There they stay, causing destruction until they are physically removed.

There are 640,000 tonnes of ghost nets abandoned in our oceans every year, according to the conservation group World Animal Protection. If unremoved, they can stay there for up to 600 years, threatening our biodiversity.

Cleaning up the nets is just the first step. Disposing of them is the next challenge. The extremely remote location of Australia's far north coast means the cost of transporting the nets south to be recycled is not viable and so the nets often end up in landfill or are burnt. Neither an ideal or environmentally friendly option.

Read more: These Swimsuits Look Amazing and Are Great for the Planet, Too

Indigenous artists have taken up the challenge or repurposing the nets into inventive and striking sculptures. This upcycled art comes with an important message.

Artist Sid Bruce Shortjoe hopes that the art will create awareness about the destruction ghost nets are causing to the marine environment.

"It's not just art. It's letting the outside world know," he told the ABC.

Sid Bruce Shortjoe is a Pormpuraaw artist whose ghost net art is on display in @dfat atrium #DFATNAIDOC#NAIDOC2016pic.twitter.com/a6g0p0n1nH

A collection of the art is currently on display at the Paris aquarium before it will travel to Geneva and possibly Berlin. Another display of ghost net art is on show at the United Nations in New York, before being transported to Virginia's Kluge-Ruhe, where it will join the largest collection of Aboriginal art in the United States.

Paul Jakubowski the manager at Pormparaaw Arts and Cultural Centre, told the ABC, that art is just a part of life in the community.

"These people have their country they have their language and culture and to them that's all one thing, they don't separate it out. Art is also part of that," he said.

We can’t think of a better way to reuse ocean pollution.