There are a lot of misconceptions about FGM — let’s clear them up. 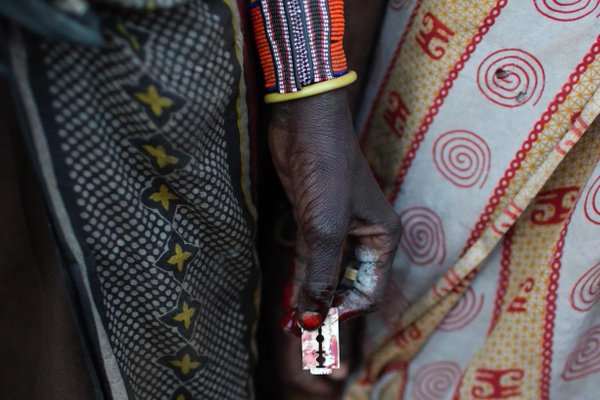 Female genital mutilation (FGM), sometimes called female circumcision or female genital cutting, is a global problem and a controversial issue. Yet there are a lot of misconceptions surrounding the topic — here’s the truth about some of those FGM myths.

Myth 1: FGM is one standard procedure.

The World Health Organization defines FGM as any procedure that “involve[s] partial or total removal of the external female genitalia, or other injury to the female genital organs for non-medical reasons.”

It’s estimated that more than 200 million girls and women alive today have been cut — half of them are in Egypt, Ethiopia, and Indonesia — but that doesn’t mean they’ve all endured the same procedure. There are four main classifications of FGM.

The first two types of FGM are the most common.

Myth 2: Only teenagers undergo the surgery as a rite of passage.

#FGM, female genital mutilation, is a growing global scourge. According to a new #UNICEF report, at least 200 million girls and women have already endured the violent practice. It is not just Africa’s problem. There is evidence FGM occurs in India, Malaysia, Saudi Arabia, South America, Europe and the United States. FGM differs across regions and cultures, often involving life-threatening health risks. In most countries, the majority of girls were cut before reaching their fifth birthday. In every case, FGM is not just an "old custom;" it is a severe violation of human rights. For the millions of girls who continue to be terrified and hurt, the time for zero tolerance is now. #endFGM

Girls under the age of 14 make up 44 of the 200 million who have undergone FGM. In Gambia, 56% of girls in this age group have been cut, while nearly half the girls in Indonesia aged 11 or younger have undergone FGM — mostly as infants. The UN’s 2015 World’s Women report found that the majority of girls who were cut underwent the procedure before they even got to celebrate their fifth birthdays.

Myth 3: Girls understand and choose to undergo the procedure.

Young girls may not be able to fully comprehend the scope of the procedure, nor consent to it. Typically, FGM happens before adolescence to preserve a girl’s “purity” and prevent her from experiencing the sexual excitement believed to accompany puberty.

Magazine: A witness to FGM @AJEnglishhttps://t.co/NQoiUBD7yh

Even when they are old enough to understand, girls are not always informed of the procedure before it begins. One FGM survivor tells the story of being cut as an 11-year-old; she was only told she would be having a ceremony during which she would receive gifts and dance to traditional music and drumming. “I was so excited … I was dancing with the women,” she said. But when the cutting started, the drummers had to play louder to mask her screams.

Based on data collected by the UN, 98% of women and girls between the ages of 15 and 49 in Somalia have been cut. Sierra Leone, Egypt, Eritrea, and Djibouti all have rates above 90%. Egypt alone is home to the largest number of FGM victims in the world (nearly a quarter). In many countries, the prevalence of FGM is lower for younger girls than older age groups, meaning some progress is being made; however, in countries like Guinea, Mali, Somalia, and Sudan the difference between age groups is slight, reflecting unchanging practices.

In some places the prevalence of the practice appears to be increasing. The number of girls and women in the US who have undergone FGM has more than tripled since the 90s.

Myth 5: The procedure is performed by medical practitioners.

It is estimated that FGM is performed by a medical professional on one in five girls; however, the majority of FGM is done by community elders, practitioners of traditional medicine, relatives, and sometimes even barbers.

Trained health-care providers are likely to use equipment like scalpels, but traditional healers often perform FGM using pieces of glass, razor blades, and thorns — without an anesthetic. Without access to medical supplies or facilities, traditional medicine practitioners resort to using things like dust to stop bleeding, and the unsterile environment in which the girl has the surgery and recovers may encourage infection and complications.

Myth 6: If the surgery is performed correctly, there is no long-term physical damage.

A photo posted by World Health Organization (@worldhealthorganization) on May 16, 2016 at 9:42am PDT

There are many possible complications that can arise from FGM surgeries, ranging from pain, infection, and excessive bleeding, to death. Even when performed “correctly” or by a medical professional, there are huge risks. Earlier this year a 17-year-old Egyptian girl died from the complications of an illegal FGM surgery performed by medical professionals in a private hospital.

Even after healing from the procedure, there can be lasting pain and damage. In some forms of FGM, the labia is removed and the remaining parts are sewn together to make the vaginal opening smaller, leaving a hole the size of a matchstick head to allow urination and menstruation. This not only makes periods and peeing incredibly difficult, but also extremely painful — like “an open wound rubbed with salt or hot chili,” one survivor said — well after the surgery wounds have healed.

An opening that small also means that women need to be unstitched or sliced open to give birth. After the baby is delivered, they’ll be sewn back up — meaning that a woman who has multiple children will have to undergo this procedure several times. She may also have to be cut open on her wedding night to consummate the marriage.

Women who have had FGM may experience pain during intercourse, impaired vaginal health, infections, and a higher risk of childbirth complications.

It is what my grandmother called the three feminine sorrows: the day of circumcision, the wedding night and the birth of a baby.

Myth 7: It is possible to perform the procedure so that it does not harm girls.

Even less extensive forms of FGM are harmful to girls. The psychological damage from the invasion of their privacy and violation of their bodies causes life-long trauma. “I didn’t have a problem urinating [or] with my menstrual cycle, but I blacked out every time I had to have my vagina examined, because my body was remembering the trauma I experienced as a child,” FGM survivor and activist Leyla Hussein told the New York Times.

'FGM is abuse - not a choice' @LeylaHussein in this week's guest-post: https://t.co/Mo8dCoa8L6pic.twitter.com/eUaATo0STC

FGM can strain the relationship between a girl and her family members who typically are the enforcers of the practice. It can also cause a woman to feel shame throughout her life and make it difficult for her to feel comfortable forming intimate relationships.

Many people believe FGM has religious roots, including those who support and perpetuate the practice; however, it’s basis is predominantly cultural. There are no religious scripts that prescribe the practice. In most societies in which FGM is practiced, it is a cultural tradition that is an expression of religious tenants — primarily virginity and fidelity.

FGM is often performed as a rite of passage and to make girls more “marriageable.”

Myth 9: It is done for health reasons.

Some supporters of FGM claim the practice has health benefits. However, these beliefs largely stem from the idea that a female’s genitals are “dirty,” therefore, girls who are uncut are “unclean.”

But the truth couldn’t be farther from that. In fact, there are a plethora of health risks associated with FGM, and no known benefits.

Myth 10: It only happens in developing countries.

FGM is a global problem. Though it is common practice in some developing nations like Somalia and Mali, the numbers FGM victims in countries like the US and UK are growing, with approximately 137,000 in England and Wales, and over half a million in the US.

Though FGM is illegal in 23 US states, only seven have criminalized “vacation cutting” — the practice of sending a child on “vacation,” generally to the country of her family’s origin, to be cut. And despite the laws criminalizing FGM, some medical professionals in the US will still perform the surgery at parents’ requests.

Myth 11: It is comparable to male circumcision.

Some argue that FGM is just a female version of male circumcision; however, there are a few key differences (which is not to say that one is better, simply that they are different). While male circumcision is also controversial, it is actually prescribed by some religions, whereas FGM is not. Additionally, male circumcision is the removal of skin, and not the sex organ itself (as with the clitoris), and does not typically cause the same kinds of long-term health problems.

But most importantly, FGM is performed to make women more attractive to men and as a means of controlling women’s bodies and sexuality. That is not the motivation for male circumcision. FGM is the literal sexual objectification of women — it aims to strip them of pleasure, while making them more appealing to men.

In many of the cultures and communities that support FGM, it is believed that women should not experience sexual pleasure and that FGM keeps girls “pure” by preventing them from enjoying sex — and it often succeeds. Many FGM survivors experience physical pain during intercourse, which discourages them from engaging in sexual activity. The trauma of cutting may also cause women to abstain. However, sexual pleasure after FGM is not impossible, and many women have reported being able to enjoy sexual activity despite having undergone cutting. This means that the premise of the practice — to reduce or eliminate sexual arousal or enjoyment — is flawed.

FGM is a violation of human rights — of the right of women and girls to their health, security, and agency over their bodies — and a form of violence against girls and women. It is important for the international community to adopt laws that prohibit FGM, and to enforce them. But it’s not enough to just criminalize the practice.

Sister Fa, rapping star, is on the ground in Africa,
changing minds about #FGM culturehttps://t.co/tfNwQwZ8Bapic.twitter.com/i3ghz2qZyK

Change also needs to happen at the ground-level, with the people who believe in FGM. In Indonesia, where the practice is still prevalent, some cut women still believe in and support the practice. One woman who had been cut explained, “If we don’t [undergo female circumcision], then we can’t be whole as women and we can’t marry.”

But this is not a practice that should be viewed as honorable and desirable. It is a practice that families need to protect their daughters from, rather than subject their daughters to. Change must start with challenging the social norms and beliefs that support FGM practices and the idea that girls and women are unclean and that their full lives and enjoyment are not equal to that of men.