Tourists Visiting South Africa Will Be Asked to Restrict Water Use, Too

"Even if it rains tomorrow, we can never go back to the old way of consuming water"

With the city facing an unprecedented water shortage, airport authorities had turned off all the sink taps but one, leaving visitors to wait in line to wash their hands, under the watchful eye of a bathroom attendant.

"In Johannesburg, there were a lot of jokes about the situation. People were saying to each other: 'Let's go to Cape Town for a dirty weekend'," said Rohner, who visited both cities recently for his job as a sales and marketing director for a Swiss machinery manufacturer.

Take Action: Urge Governments and Businesses to Invest in Clean Water and Toilets

Cape Town, which is battling to keep its taps flowing as reservoirs run close to dry following a three-year drought, declared a national disaster this month. Without rain, Cape Town could run out of water by July 9, city authorities predict.

For visitors thinking of flying into one of the world's tourism hotspots, threats of a water "Day Zero" raise a range of questions: Will a visit waste scarce water local people need? Will I be able to flush my hotel toilet and have a shower? Should I come at all?

Sisa Ntshona, who heads the tourism marketing arm of South Africa's government, has the answer you'd expect: Tourists - who support an estimated 300,000 jobs in South Africa's Western Cape province - should come but they should be prepared to help out and "Save like a local", as the slogan goes.

In a city where residents now are expected to use no more than 50 litres of water a day - enough to drink, have a 90-second shower, flush the toilet at least once and wash a few clothes or dishes - tourists "don't have special privileges", he said.

That means no baths, swimming pools now sporting salt water instead of fresh, sheets and towels changed less regularly and signs urging visitors to flush toilets as infrequently as possible.

Read More: Photos of Cape Town in Crisis As the City’s Water Runs Out

At one Cape Town hotel, visitors who insist on a bath - which takes 80 litres of water - now have to conspicuously carry a large rubber duck placed in their bathtub to reception to exchange it for a bath plug.

With climate change expected to bring worsening water shortages to cities around the world - from Sao Paulo to Los Angeles to Jakarta - such changes are going to be needed in many places in years to come, said Ntshona, the CEO of South African Tourism.

"How do we recalibrate the norm for global tourism?" he asked, on a visit to London to reassure potential visitors. "Tourists are aware of recycling, carbon emissions. But now it's water."

"This is the new norm," he said. "Even if it rains tomorrow we can never go back to the old way of consuming water." 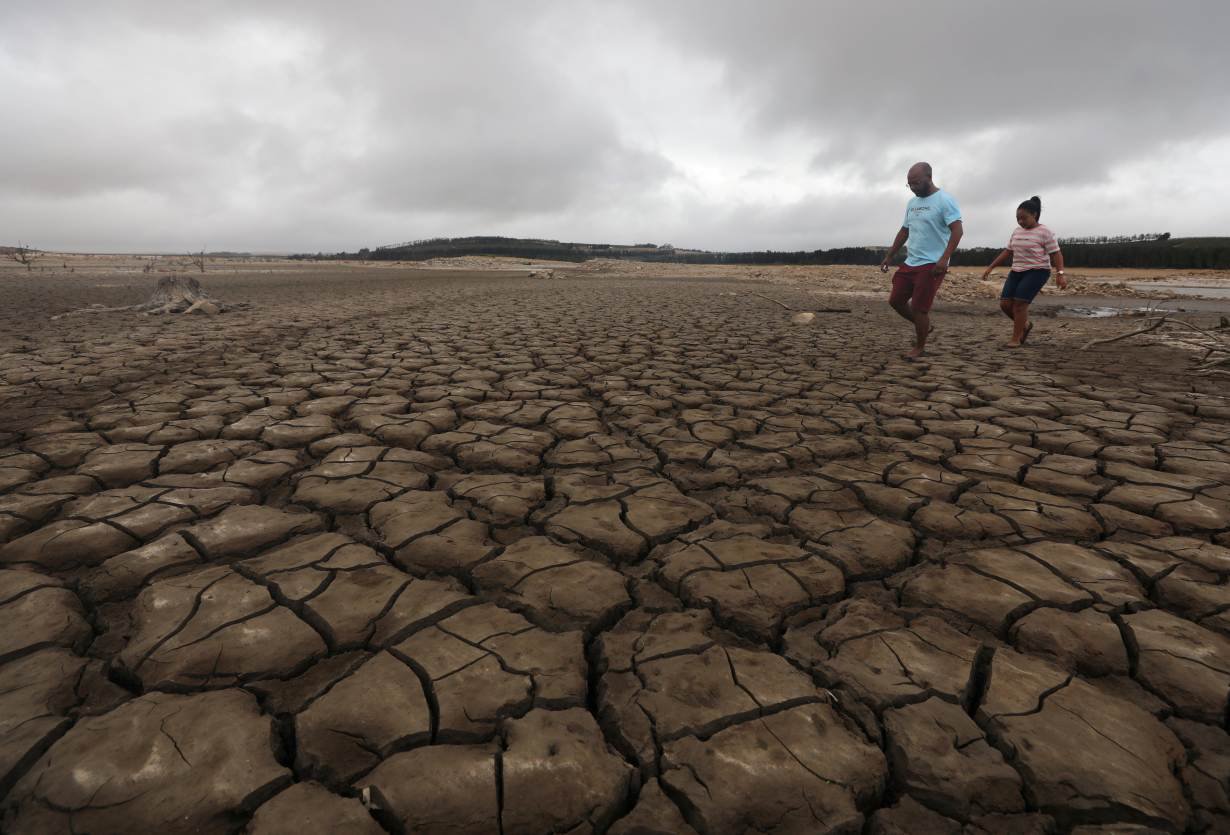 A family negotiates their way through caked mud around a dried up section of the Theewaterskloof dam near Cape Town, South Africa, January 20, 2018. The dam, which supplies most of Cape Town's potable water, is currently dangerously low as the city faces

For Cape Town, keeping tourists flowing through the city is an urgent priority.

Foreign tourists represent only about 1 percent of the people in the city even at peak times, but tourism - foreign and South African - contributes $3.4 billion to the province's economy each year, said Ravi Nadasen, deputy chair of the Tourism Business Council of South Africa.

Any tourism drop-off in Cape Town also hits the rest of the country, Ntshona said. With many visitors booking itineraries that start in Cape Town and move east, he said, a loss of visitors to Table Mountain also means fewer people at the country's game parks, vineyards and beaches.

"If South Africa falls off the tourism radar screen globally, to get it back on will take so much attention and focus," he said.

Bookings for the first quarter of the year have so far not fallen, Ntshona and Nadasen say, though they have been fielding inquiries from worried potential visitors.

"We'll get a better sense by the end of March, when we look at forward bookings for the next six months," Ntshona said.

Tourism officials are well aware of the potential threat, however. In 2014, an Ebola crisis in West Africa - a six-hour plane flight away - led to a 23 percent drop in visitors to Ebola-free South Africa as tourists shunned African destinations, Ntshona said.

To try to prevent a repeat of that disaster, government and business leaders are rushing to shore up water supplies - and confidence.

Organisers of dozens of big conferences held in Cape Town each year are making plans to ship in water from other less thirsty parts of the country, Ntshona said.

Hotels have installed low-flow showerheads, turned off fountains and replaced cloth napkins with paper ones.

A Cape Town subsidiary of leading hotel chain Tsogo Sun is this week taking delivery of a pioneering desalination plant, to suck seawater from Cape Town's harbour and churn out enough fresh water for the chain's 1,400 Cape Town hotel rooms.

Cape Town itself is also making plans to bring in desalination plants - though not quickly enough to deal with the impending "Day Zero", now pushed back to July after a successful campaign to cut the city's water consumption by half. 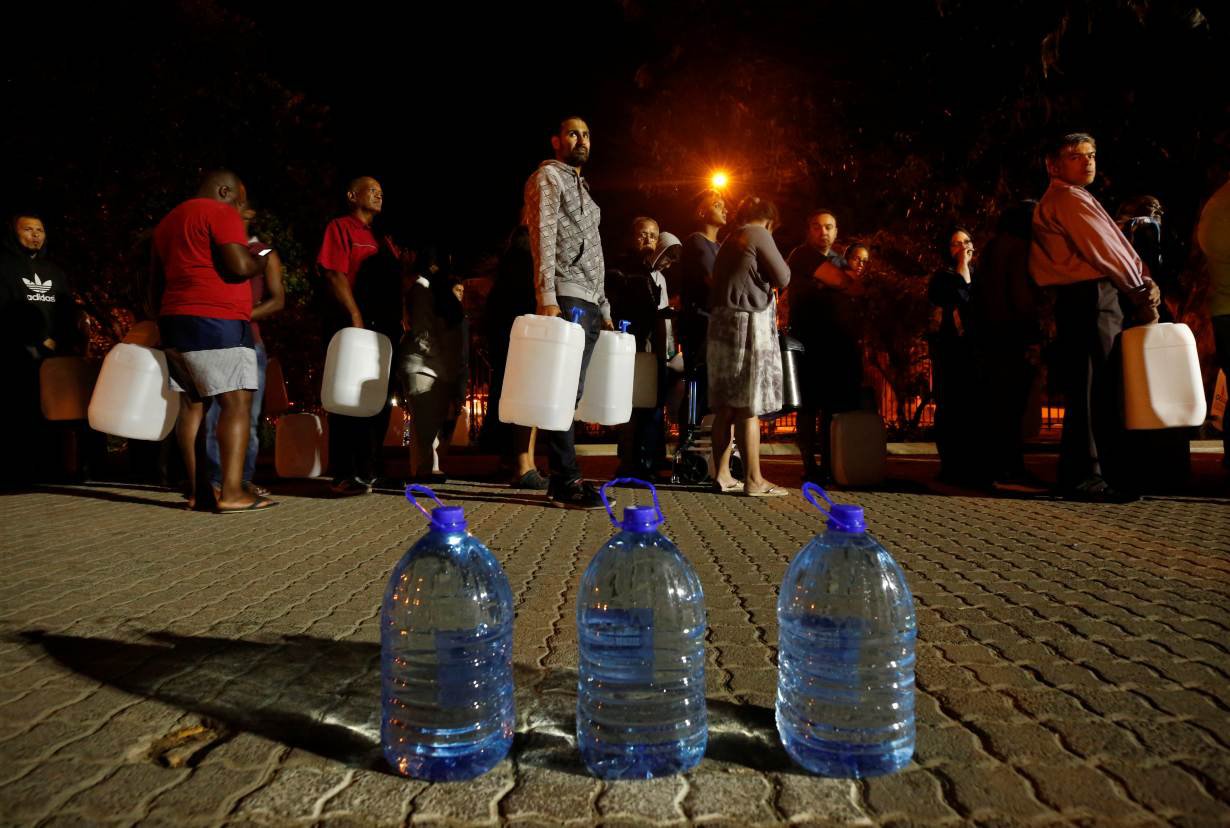 A family negotiates their way through caked mud around a dried up section of the Theewaterskloof dam near Cape Town, South Africa, January 20, 2018. The dam, which supplies most of Cape Town's potable water, is currently dangerously low as the city faces

Experts have warned of water risks in Cape Town for years, but political infighting has got in the way of action, Ntshona admits.

Cape Town is run by an opposition party to the ruling African National Congress - and even the ANC saw its embattled leader, President Jacob Zuma, pushed out of office last week.

Read More: Cape Town Is About to Run Out of Water

"Part of the lesson we're learning as a country is that when you have a crisis, stop bickering and focus on the issues," Ntshona said.

Another lesson, he said, is that water shortages - predicted to become longer and deeper across southern Africa as climate change strengthens droughts - cannot be seen as a passing problem.

Winter rains are expected in Cape Town starting in May or June. If they arrive, the current crisis will ease, officials predict.

But, regardless, "we need to recalibrate our relationship with water as a country", Ntshona said.