395 million children are living under conditions of extreme poverty. 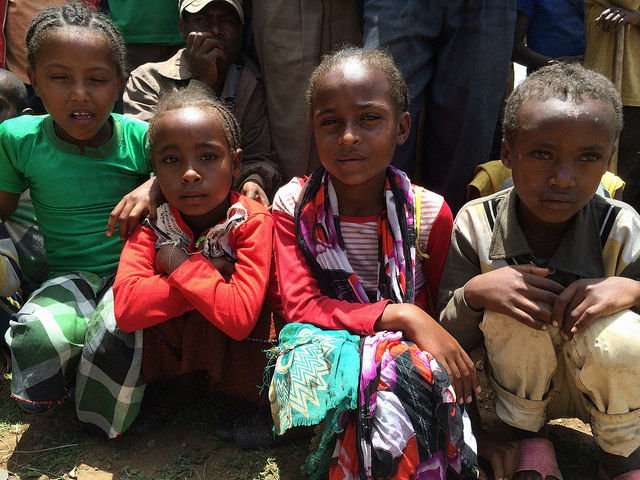 There are 395 million children living under conditions of extreme poverty, according to a new report from the World Bank and UNICEF. Global poverty is declining overall, but pockets of extreme poverty are becoming more concentrated.

“Ending Extreme Poverty: A Focus on Children,” a joint effort between the World Bank and UNICEF, found that children in developing countries are more than twice as likely to live in extreme poverty than adults.

Read More: 1.1B People Have Risen From Extreme Poverty Since 1990, World Bank Says

One-fifth of children in developing countries under age five were living in homes faced with conditions of extreme poverty.

The most startling fact? Half the children in sub-Saharan African and one third of children in South Asia are living on less than $1.90 per day.

The youngest children were found to be the most affected by the negative effects of poverty. For children under five, their health, education, and nutrition are at stake.

In regions affected by conflict, children are more likely to experience poverty. Children living in poverty are also more at risk for being exploited and abused.

“This not only limits their futures, it drags down their societies,” said Anthony Lake, UNICEF Executive Director.

It’s not just extreme poverty. Even at higher poverty lines, more children are at risk. 45% of those living in households subsisting on less than $3.10 a day per person are children.

UNICEF and the World Bank are calling out for more specific investments to help children succeed in a world where they are currently at a severe disadvantage.

Read More: Half of All Migrants Are Children, And Other Startling Facts About Refugees

“The sheer number of children in extreme poverty points to a real need to invest specifically in the early years — in services such as pre-natal care for pregnant mothers, early childhood development programs, quality schooling, clean water, good sanitation, and universal health care,” said Ana Revenga of the World Bank.

Together, UNICEF and the World Bank recommend governments prioritize health, education, clean water, and invest more in programs like cash transfers that allow families to spend more on food and other child needs.

The importance of early childhood development must become central for policy, mothers, and fathers in order to break the unfair cycles of poverty young children in developing countries currently live in.

These shifts in policy along with continuing to measure child poverty rates are necessary to end poverty by 2030.