No soup for you (unless you have one of these spoons)! 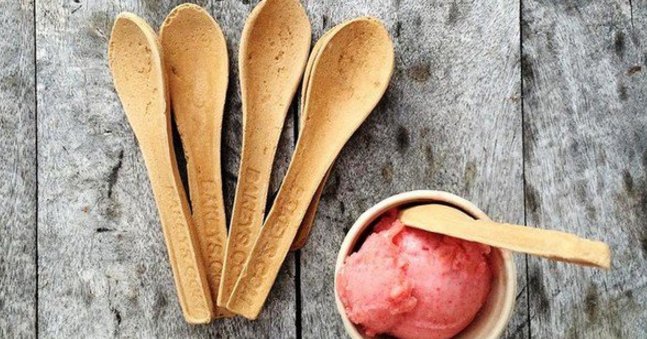 Each year, 120 billion  pieces of plastic cutlery are discarded in India.

Narayana Peesapaty, a Groundwater researcher was fed up with this extreme number, so he created a way to save the environment: edible cutlery.

A photo posted by MakeEveryDayEarthDay™ (@makeeverydayearthday) on Mar 25, 2016 at 12:08pm PDT

Who knew spoons, forks, sporks, and chopsticks that you can eat would be a possible solution to pollution?

When plastic is discarded it takes a long time to decompose, ultimately harming the environment by filling up in landfills or worse, polluting the ocean. Using a plastic fork sure is easy for an on-the-go food option and can be recycled, but not every curbside recycling program accepts these pieces of plastic, and not every person recycles them. Plastic cutlery could be washed and reused, but then they usually take on the smell and color of last night’s spaghetti and meatballs after a week or so.

Further, sometimes there is no clean water available to wash them. This is actually a problem that metal cutlery has as well, and is why some places have turned to plastic "disposable" options.

Narayana Peesapaty, founder of Bakey’s Cutlery, asks a very important question: what if we could eat the cutlery that we use?

Imagine eating your next meal and then crunching on the thing that transported its deliciousness to your mouth.

Since 2010, Bakey’s manufactured edible cutlery, including spoons in different shapes and chopsticks for the primary reason of eliminating plastic cutlery.

Looking to stir in some sugar into your afternoon tea? The utensils do not get immediately soggy if placed in water and warm food, for they only get soft after 10-15 minutes.

A variety of flavors are offered across the plain to sweet and savory spectrums. The flavor of the utensils will not interfere with the taste of the dish it is used with.

Innovation that would cater to the need of all tongues at all times with all foods. #innovation#ediblecutlerypic.twitter.com/NnBbLrPCJR

The edible cutlery has a shelf life of three years. They are made from a combination of millet, rice, and wheat flours. Millet is a non-gluten grain that requires less water than rice when grown. This makes it cheaper to grow and  more attractive to farmers in dry regions looking to make profit.

Narayana understands that plastic is cheap. He plans to make the edible cutlery just as cheap, if not cheaper, by encouraging farmers that growing more millet increases profits.

The factory where the edible cutlery is made, is an all-women enterprise. It specifically employs women from low-income backgrounds in India. Does it get any better than that?

Oh yes it does! Even if discarded, all of the edible utensils decompose within five to six days (If not eaten by a nearby animal first).

Check this video out for more information:

India Innovates Episode 4 - Edible CutleryEat with it and then Eat it! This edible cutlery is a perfect alternative to harmful cutlery, it is not only environmentally safe but also enriched with nutritious ingredients. Email: info@bakeys.com or bakeys.narayana@gmail.comWeb: http://www.bakeys.com/Order: http://www.bakeys.com/order.htmlVisit Bakeys on FBMarico Innovation Foundation Black Ticket Films

Posted by TheBetterIndia on Tuesday, March 15, 2016