His cleaning skills are putting us all to shame! 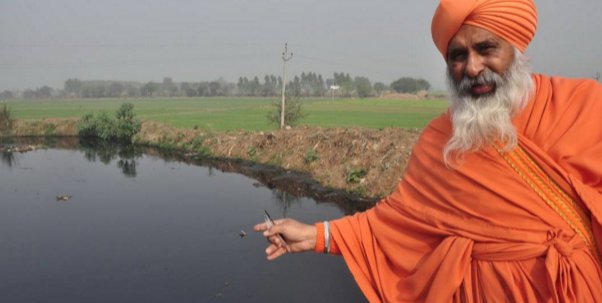 Meet Sant Balbir Singh Seechewal. He’s the man, the myth, the legend--or most commonly known as, “Eco-Baba” in India for his environmental conservation efforts.

His project to rejuvenate of the Kali Bein river is more than an amateur environmentalist stunt.

Almost 100 miles long, the Kali Bein river is a tributary of Beas in Doaba region of Punjab. It was filled with waste materials that reduced it to a small drain a decade ago. The river water dried up in several places and the water became alarmingly scarce.

The river poses both an environmental and economic crisis for farmers and the people of Punjab.

In 2000, without the help of government, Sant Balbir Singh Seechewal set out on a mission to clean the Kali Bein river. He knew he couldn’t do it alone. He wanted to teach the importance and benefits of protecting and cleaning the river water to others so he gathered a large number of volunteers.

Taking nearly a decade, Sant Balbir Seechewal and his trusty team of volunteers cleared the hyacinth and silt out, restoring the river’s normal flow of clean water. They also planted trees and made an effort to beautify the area.

The team did not stop at the Kali Bein river, they proceeded to restore river banks all over.

Through this simple restoration, the water problems in the Doaba area of Punjab were solved. The project that was once a man’s wish, turned into an incredible economical and environmental success.

Hearing of his efforts, the local government collaborated with Sant Balbir in creating a low-cost sewage model. The underground sewerage system model stores sewage waters in ponds and treats it in a natural way for usage in agriculture and irrigation. Around 50 villages have benefited in using the Seechewal model and farmers have been able to participate in organic farming because of it.

The Eco Baba was even approached by the Central Government to help clean the Ganges River, a river that poses an even larger environmental and economic risk because it flows through many rural areas and is historically very important to a wide range of communities.

Sant Balbir has also worked with the global community in the fight to eliminate extreme poverty, ignorance, superstition, and work towards a world with true gender equality. He has established schools, technical centres and degree colleges, where advanced and technical education is provided at a very low cost to the girls and those experiencing poverty.

Other than being known as the “Eco Baba”, Time magazine crowned Sant Balbir as a “Hero of Environment”, claiming him as the only Indian and the only Asian to get this honor.

The world needs more leaders like Sant Balbir Singh Seechewal and his volunteers looking to make a difference.