Women select cassava tubers (manioc), on a production site of "attieke", a side dish made from cassava, in Affery, Ivory Coast, June 2018.
AFP
Food & Hunger

The viral disease could condemn millions to hunger.

ABIDJAN, IVORY COAST — Researchers from half a dozen states in West Africa have joined together in a battle against what one expert calls a root crop "Ebola" — a viral disease that could wreck the region's staple food and condemn millions to hunger.

Their enemy: cassava brown streak disease (CBSD), a virus that strikes cassava, also called manioc, which in some of the region's countries is consumed by as many as 80% of the population.

The root-rotting disease was first discovered in Tanzania eight decades ago and is steadily moving westward.

"In outbreaks in central Africa, it has wiped out between 90% and 100%t of cassava production — it's now heading towards West Africa," Justin Pita, in charge of the research program, told AFP.

"It is a very big threat. It has to be taken very seriously," he added.

In Uganda, 3,000 people died of hunger in the 1990s after the dreaded disease showed up, striking small farmers in particular.

"You can call it the Ebola of cassava," said Pita.

The West African Virus Epidemiology (WAVE) project, a multi-million-dollar scheme funded by the Bill and Melinda Gates Foundation, aims to shield the region from the advancing peril.

Headquartered at Bingerville, on the edges of the Ivorian economic capital Abidjan, it gathers six countries from West Africa — Benin, Burkina Faso, Ghana, Ivory Coast, Nigeria, and Togo — as well as the Democratic Republic of Congo. 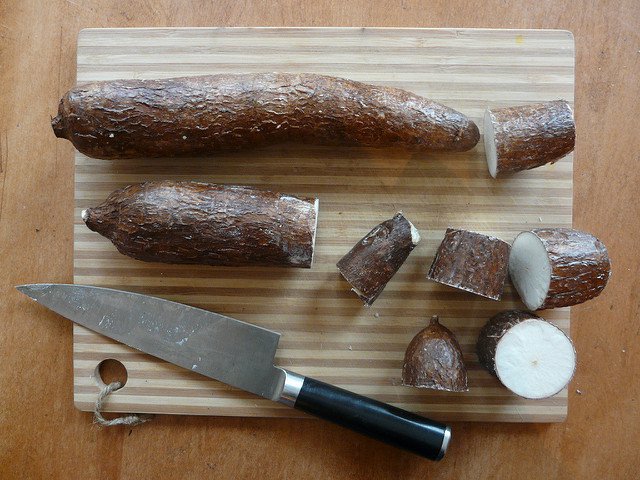 Much is already known about CBSD — the virus is generally believed to be propagated by an insect called the silverleaf whitefly, and also through cuttings taken from infected plants.

Read more: The Biggest Assault of the Yemen War Just Put Millions at Risk of Famine

But there remain gaps in knowledge about West Africa's specific vulnerabilities to the disease.

They include understanding the susceptibility of local strains of cassava to the virus, and identifying points in the cassava trade that can help a localized outbreak of CBSD swell into an epidemic.

The scheme will also look at initiatives to help boost yield — a key challenge in a region with surging population growth.

"The current average yield from cassava [in West Africa] is 10 to 12 tonnes per hectare [four to 4.8 tonnes per acre], but it has the potential to reach 40 tonnes a hectare," said Odile Attanasso, Benin's minister of higher education and scientific research.

"In Asia, they have yields of 22 tonnes per hectare."

The WAVE project hopes to go beyond the lab and test fields, though.

It also wants to harness the clout of community leaders and chiefs to spread CBSD awareness and promote better farming practices, such as confining and destroying crops in infested areas and banning transport of manioc cuttings.

"We kings and traditional chiefs are the interface between the population and the government," said Amon Tanoe, the ceremonial monarch of the coastal Grand-Bassam region in Ivory Coast.

Ivory Coast is a huge consumer of cassava — the starchy root is typically pulped and fermented and served in a side dish called attieke.

In Affery, a big cassava-growing region about 100 kilometers (60 miles) east of the economic capital Abidjan, makers of attieke said they were deeply worried about the threat of CBSD.

"Attieke is our husband," said Nathalie Monet Apo, head of the association of attieke producers, emphasizing how the cassava dish is intertwined with Ivorian life.

"If the disease shows up, it would be dramatic for our families and our community," she said.

Read more: Africa's Food Supply Is Under Threat — and It's Not Just From Drought or Famine

"They have to find a cure for this disease — it's thanks to growing cassava that I am able to provide an education for my four children," said Blandine Yapo Sopi, eyeing a mound of harvested manioc that she hoped would bring in 450,000 CFA francs (nearly 700 euros, around $800).

This article was originally published on Voice of America (VOA) here.