Her new wonder material is a game changer. 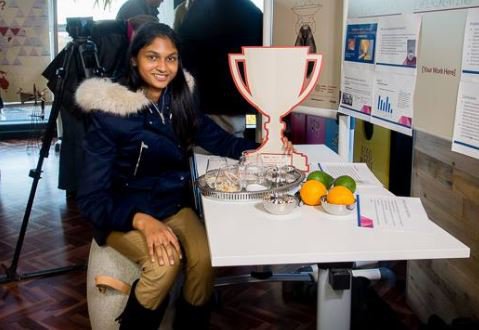 In the midst of one of the worst droughts in her nation’s history, a 16-year-old South African invented a low-cost, superabsorbent agricultural material that could revolutionize farming in water-scarce areas.

Kiara Nirghin, an 11th grader at St. Martin’s School in Johannesburg, developed a superabsorbent polymer (SAP) from orange peels and the skin of avocados. The new substance could be a crucial tool to deal with the drought conditions causing devastation and famine across large swaths of southern Africa..

SAPs are widely used in arid areas to combat water scarcity and stave off the impacts of drought. The polymers can hold 300 times their weight in liquid. Often deployed as little gummy balls mixed into soil or a sticky slush that lays between plant lines, SAPs can retain rainfall and then slowly release it during dry spells.

Read More: Why the Heck Is L.A. Dumping 96-million "Shade Balls" Into a Reservoir?

Chemical-based SAPS are usually very expensive and are not biodegradable. Nirghin set out to create a low-cost and environmentally friendly alternative.

The young inventor’s research was part of Google’s worldwide Science Fair. Through a simple process detailed on her science fair entry page, Nirghin boiled orange peels then finely chopped them with avocado skins. The mixture was left to dry in the sun for 14 days, resulting in a very gelatinous “solution.” A portion of the mixture was then baked in a home oven and ground into fine powder. 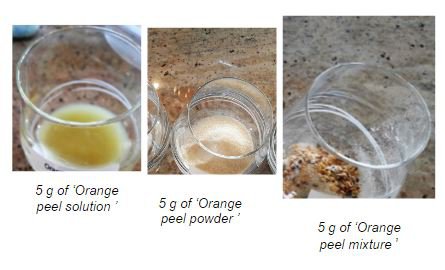 The process resulted in three distinct SAPs to test against standard acrylic versions. One version was just the orange peel powder, the other was just the gelatinous “solution,” and the third was a combination of the two named, “orange peel mixture.” The mixture can be seen in the video below.

The experiment showed the new substance “increases the likelihood of plants to sustain growth in a drought by 84%,” Nirghin wrote in her study.

Even with the acrylic SAP performing almost as well as the orange mixture, the new substance has many other advantages.

“Commercially used acrylic SAP retail for around $2,000 to $3,000 per metric ton, whereas the 'orange peel mixture' could retail at $30 to $60 per metric ton,” Nirghin estimates. The production process is also much simpler, could put waste to good use, and generates less pollution.

The science fair submission predicts the substance could be produced in a wide range of situations. Mass production could use waste products from the juice industry, while local farmers could create their own versions from agricultural products.

Read More: How the Drought in Ethiopia Is Ending School for Kids

The Google Science Fair judges were convinced this could be a game changer for drought-hit South Africa and awarded Nirghin’s the Community Impact Award for the Middle East and Africa region.

"Science should be used for the good of humanity," Nirghin said after receiving the award.

This week, the young innovator will find out if she will be named one of the competition’s 16 global finalists that will convene for the final announcement on September 27 at Google’s headquarters in California.