This organisation is helping girls on their periods to stay in school. 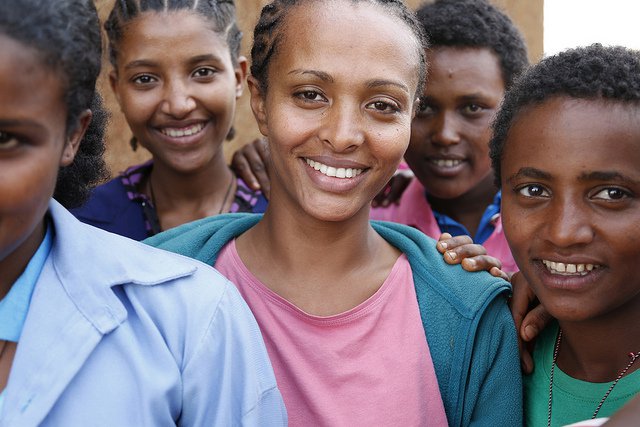 There are around 124 million children out of school globally, and 63 million of these are girls according to The Global Partnership for Education (GPE)

One of the main reasons for this? Their monthly period. Yep, you read that right. According to Water Aid, around 52% of women are of menstruating age, but in many parts of the world, the topic of a woman’s menses remains taboo. Lack of information, inadequate access to hygiene, and a number of other socio-cultural factors mean that women and girls suffer many practical challenges when their time of the month rolls around.

For girls of schooling age, attendance often plummets during these periods, with a reported 95% of girls in Ghana often missing school as a result of their menses.

In addition to the cost to their education, girls on their periods may be restricted from cooking, playing sport, eating certain foods, attending religious functions, and even sleeping in the same room as other family members. In many communities, women are forbidden from using water sources while menstruating, and are thus put at risk of infection or disease. 66% of Indian women surveyed reported that, in the absence of access to a household toilet, they commonly managed their menstruation in unsanitary outdoor locations such as fields.

In 2008, humanitarian worker, Celeste Mergens, was working in a Kenyan orphanage when she discovered that girls on their periods were spending days at a time isolated in their rooms, seated on cardboard, and often without food. For many women in underprivileged communities, this is a common experience.

Horrified, Mergens immediately set out to change this, founding Days for Girls (DFG), an international organisation which aims to “empower every woman and girl to become an Ambassador of Women’s Health” in her community. DFG does this in two main ways.

1. Providing women around the world with period kits containing hand-sewn, washable sanitary pads and underwear intended to last 2-3     years, as well as soap and other hygiene essentials.

2. Operating within an enterprise model through which they give women the tools and training to make their own DFG kits and also to educate others about effective menstrual hygiene management.

Since 2008, the organisation has helped over 640 000 women and girls in 100+ countries, giving them back more than 115 days of education and opportunity.

Twelve-year old orphan, Kgotso, after completing a DFG training session at her school in Zimbabwe, proclaimed, “ I am no longer an orphan. I am now a leader of women.”

Access to education doesn’t only benefit girls attending school, it also has wide reaching impacts for communities and countries at large.

GPE reports that countries who fail to educate girls at the same level as boys can lose in-excess of $1 billion annually. Educating women improves child mortality rates, helps to prevent child marriage and, according to UNESCO, can significantly reduce malnutrition and maternal death, potentially saving millions of lives.

Furthermore, as well as narrowing the gender pay gap and improving the likelihood of women finding employment, WASH United says that “one additional year in school can increase a woman’s lifetime earnings by 10-20%” and also help to raise economic growth per capita.

How to get involved:

Don’t worry if you’re not the crafty type, there are many ways you can support DFG, including fundraising, helping to distribute kits, partnering with local enterprise, and raising awareness about the barriers to education faced by girls around the world.

Join us today and pledge to be an advocate for girls’ education everywhere.