The practice of “menstrual huts” are outlawed, but remain dangerously prolific. 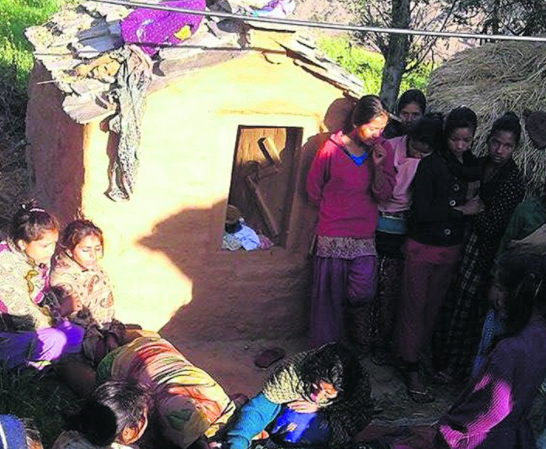 A teenage girl in Nepal died while being forced to stay in a small, broken-down animal hut while she was on her period this week.

It is the second report this month of a Nepalese woman dying while staying in one of these menstruation huts, a practice that is outlawed but still common in rural Nepal.

Roshani Tiruwa, 15, is believed to have suffocated after starting a fire to keep warm in the poorly ventilated shed made of mud and stone this weekend, according to Reuters.

Tiruwa was a ninth-grade student at a local secondary school, and was allegedly on the third day of her period when she died, according to a local news report. Her father discovered her body Sunday morning in the hut outside their home, in the village of Gajra, nearly 300 miles west of Kathmandu.

“While we are waiting for the post-mortem report for the cause of her death, we believe she died due to suffocation,” police inspector Badri Prasad Dhakal told Reuters.

The menstruation huts, known as “chhaupadi,” are part of an ancient cultural practice in which some Hindus believe that girls on their periods are impure and have the ability to taint a household’s food or other members. They are forced to stay in “chhaupadi huts” for the duration of their periods.

The chhaupadi system has come under scrutiny in recent years, as it has remained in practice despite Nepal officially outlawing the huts in 2005. Girls frequently miss school while on their periods, and are vulnerable to the unsanitary conditions, the elements, animals, and attackers in the huts.

An official from the country’s women and child welfare ministry acknowledged that the practice is still too widespread. A 2011 report by the UN found that 95% of women in the Achham district of Nepal, where Gajra is located, still practice the chhaupadi system.

Read More: Banished by Family During Their Period, Girls In Nepal Fight Back With Photos

“We have launched different schemes but quickly removing practices that are deep-rooted in the society is difficult,” Binita Bhattarai said. “Changing mindsets and social attitudes is a time-taking process.”

According to Al Jazeera, at least eight women have died in the menstruation huts in Nepal since 2007. Earlier this month, 26-year-old Dambara Upadhyay was found dead in a hut near her home.

Topicsmenstruation#LeveltheLawNepalMenstruation Hut
Brought to you by