US Gets Ready for 'Day Without Immigrants' Rallies and Strikes

On Thursday, your favorite restaurant may shut down. 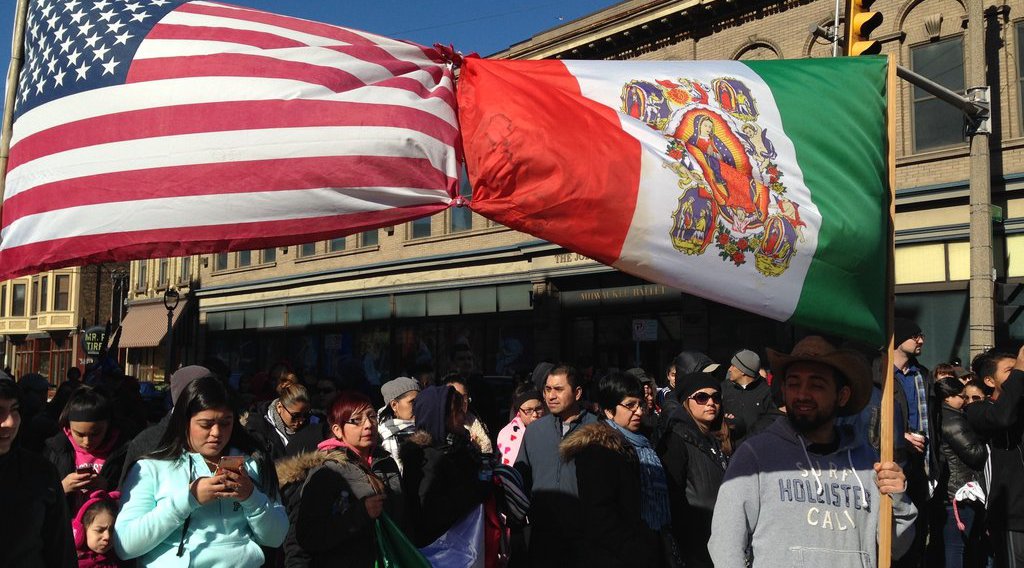 On Monday an estimated 30,000 to 50,000 people across the state of Wisconsin took to the streets to protest the enforcement of a federal law, which was recently beefed up by the Trump administration, that allows local police officers to act as Immigration and Customs Enforcement (ICE) agents.

Called “A Day Without Latinxs, Immigrants & Refugees,” Monday’s movement was organized by Voces de la Frontera (Voices of the Border), a grassroots organization that stands for immigrants’ rights.

Tens if thousands on strike hundreds of businesses closed in Wisconsin to resist deportations #daywithoutlatinospic.twitter.com/n6yx7goMAy

On Thursday, the movement will spread nationwide, with a number of cities, including Washington D.C., Philadelphia, and Austin, Texas, planning to organize similar actions, and restaurant owners in several cities shutting down their kitchens in solidarity.

“I think we made a strong statement,” Alejandra Gonzalez, a member of Voces de la Frontera and a volunteer organizer at Monday’s march, told Global Citizen. “We’re not going to let our community be intimidated.”

Around 150 businesses shut down for the day and smaller protests also took place in cities across Wisconsin, Gonzalez said.

The march attracted not just Latinxs (which refers to people of Latin American origin from all genders), but people of all races and creeds.

“It felt good to see allies basically say, ‘You are valued and you are welcomed here,’” Gonzalez said.

The law in question, which is part of the Immigration and Nationality Act, gives state and local police the ability to carry out raids and detain undocumented immigrants.

The law wasn’t used during President Obama’s administration, which chose not to enforce the section of the act.

But President Donald Trump’s recent executive order, “Enhancing Public Safety in the Interior of the United States,” has breathed new life into the law, which led to more than 600 undocumented immigrants being detained in 11 states, in recent weeks.

Now Milwaukee Sheriff David Clarke says he would like his department to be able to enforce the Immigration and Nationality Act, which would allow local sheriff’s officers to act as ICE agents in arresting and detaining immigrants suspected of committing crimes.

“President Trump made it clear with his executive order on enforcement of our immigration laws,” Clarke wrote in January. “No more catch and release of criminal illegal aliens. I will assign as many deputies to this initiative as I can. It is a public safety priority.”

Organizers of Monday’s march believe that these policies would actually decrease public safety.

“It goes against the public safety of everyone who lives here and we want to make sure we have a safe county for everyone,” Mario Garcia, a member of Voces de la Frontera, told ABC News.

The protesters instead sounded an economic argument in favor of the productive contributions of immigrants to the community.

According to the American Immigration Council, immigrants account for roughly 5% of the population of Wisconsin, and immigrant-owned businesses employed more than 25,000 people.

"Today, we organized a Day Without Latinxs, Immigrants, and Refugees to use our economic power — through work stoppages, small business closures and our consumer boycotts, to defend our families and communities," Christine Neumann-Ortiz, executive director of Voces de la Frontera said in a statement.

The restaurant industry, much of which is powered by immigrants from Central and South America, will flex its economic muscles nationwide on Thursday.

José Andrés, a high-profile restaurateur and owner of five popular D.C.-area restaurants, has said he will close down all of his restaurants in solidarity with Latinxs, immigrants, and refugees.

In support of our people & #ADayWithoutImmigrants Thurs 2/16 we will not open @jaleo DC CC MD, @zaytinya or @oyameldc#ImmigrantsFeedAmerica

Andy Shallal, the owner of Busboys & Poets in Washington D.C., and an Iraqi immigrant, also announced his support for the movement.

In Philadelphia, Minneapolis-St. Paul, Austin, and Des Moines, other restaurants are also closing down Thursday.

El Burrito Mercado, a popular spot in Minneapolis, posted to their Facebook page.

Read More: The 7 Biggest Challenges Facing Refugees and Immigrants in the US​

“In support of our immigrant customers, community, employees, and in honor of our immigrant parents Tomas & Maria Silva whom built El Burrito Mercado, and in solidarity of the nationwide movement “A Day without Immigrants” our staff and management have decided unanimously to close on February 16, 2017,” the message read.

Bolstered by the outpouring of support across the nation, immigrants in Wisconsin will continue fighting against 287(g), organizers said. For Voces de la Frontera, the fight could go on for weeks or months.

“If we need to extend our strike to a month or two we will,” Gonzalez said. “We won’t stand by, we won’t back down, we won’t allow that bigotry and prejudice to exist, we won’t allow our community members to be intimidated.”