We refuse to live in a world where millions of girls and women are held back.

This article was written by Lucinda Hartley.

“When one woman wins, another decides to try." These are powerful words from a Samoan Village Women’s representative who has walked the talk. Her journey is one of failure, loss, commitment and, ultimately – change towards ending gender discrimination. Her story is one of many shared at the 11th high-level Commonwealth meeting of Women’s Affairs Ministers in Apia, Samoa last month.

Delegations from countries across the Commonwealth met at this triennial meeting to assert gender equality as being critical in achieving the Global Goals. The meeting also reaffirmed that the empowerment of women and girls will make an essential contribution towards achieving the 2030 Agenda.

Addressing this, official delegations at the Ministerial Meeting added their support to Global Citizen’s #LeveltheLaw campaign to end discrimination against women and girls.  In a landmark event, representatives from Samoa, Fiji, Kenya and the Seychelles pledged their commitment to the #levelthelaw, joining Malta and Australia who have already signed the declaration, and adding their names to the 55,131 existing signatories.

“… I highly commend Global Citizen on their campaign to shine a spotlight on the laws that discriminate on the basis of gender. We Commonwealth nations are no exception – as all countries contain aspects of discriminatory laws – including Samoa. I am now pleased to endorse Global Citizen’s campaign to Level the Law by joining Malta and Australia, who have already signed their declaration. “

Hon. Min. Faimalotoa specifically challenged Pacific delegates to add their commitment to the campaign, noting that “our culture respects our sisters and mothers”. Her challenge echoed a statement made by Her Excellency Natasha Stott Despoja AM, Australian Ambassador for Women and Girls, who commended the work of the #LeveltheLaw campaign in her opening keynote address at the meeting, urging all countries to commit to ending sexist laws.

Helena Dalli, Maltese Minister of Social Dialogue, Consumer Affairs and Civil Liberties,  also recorded a special video message to highlight the follow up from Malta’s commitment to repeal a law in their Criminal Code that legalized violent abductions of women.

“In March, during the 60th Session of the Commission on the Status of Women, I was pleased to announce Malta’s commitment to fully implement the Council of Europe Convention on Preventing and Combating Violence Against Women and Domestic Violence, and repeal archaic legal provisions that created a two-tier system for men and women. I am now pleased that Malta will be launching the public consultation on that process and look forward to proceed with the Parliamentary discussion to enact these much-needed changes….I hope this will set an example to other countries to review and take steps to reform laws that infringe on the basic human rights of girls and women.”

A joint statement issued at the conclusion of the meeting confirmed the importance of strong legal frameworks to prevent discrimination against women and girls including the incorporation of international agreements into domestic regulatory frameworks and policies.

This provides a strong platform for Commonwealth countries moving forward to address and reform gender discriminatory laws. The first female Secretary-General of the Commonwealth, Rt Hon. Patricia Scotland QC, who also addressed the Global Citizen Festival in New York this year, said at the ministerial meeting: “We need to do better for women and girls, because we need to do better for every single person within our loved commonwealth.”

We refuse to live in a world where millions of girls and women are held back simply because of their gender. Join us and brave campaigners all around the world to #LevelTheLaw. 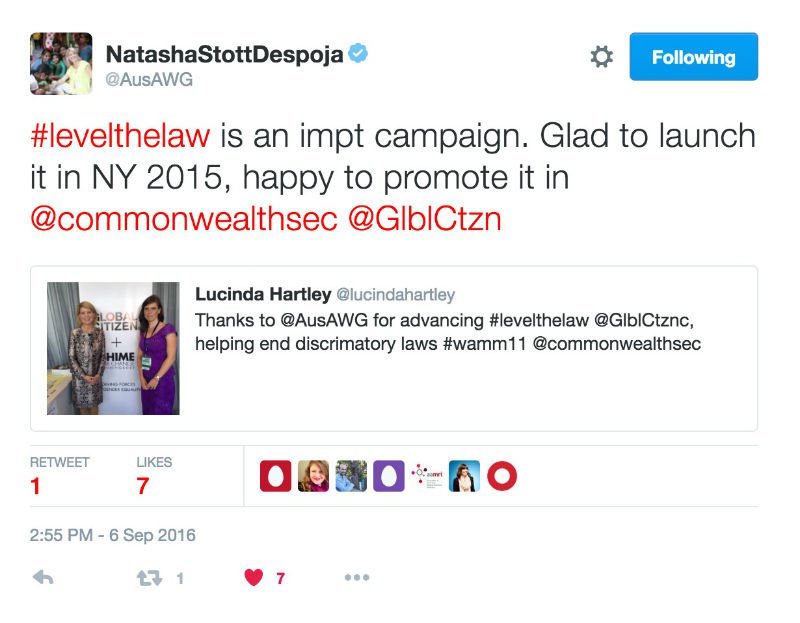