High humidity and hot temperatures make the beautiful beaches of Ceará, located in Brazil’s Northeast, a tourism haven all year round.

But rising temperatures, prolonged droughts, extreme rainfall, and rising sea levels are devastating the region's fishing and farming communities, affecting over 4 million people, as well as the environment.

That’s because Brazil's Northeast is the most vulnerable region in the country to climate change. And because Ceará, home to 9 million people and numerous Indigenous communities, is one of Brazil's poorest states.

In the lead-up to the 24-hour event Global Citizen Live in September 2021, Coldplay called on world leaders to defend the planet as part of Global Citizen’s year-long campaign, specifically calling on eight Brazilian governors to commit to combat climate change.

This meant demanding protection for almost 60% of the Amazon rainforest, and stopping the rapid loss of precious rural land and ecologically diverse coastline throughout the Northeast of Brazil. Six states responded, one of which was the state of Ceará, which is home to vast swaths of desert and rolling red dunes, bordering a long stretch of the Atlantic coast.

Climate change is also warming oceans along the coastal cities like Fortaleza, causing sea levels to rise, and making this once ecologically diverse stretch of ocean uninhabitable for marine life such as the Boto Cinza dolphin and manatee. Meanwhile Quilombola — Brazilians of African descent — and Indigenous communities, who have fished the region for generations, are also being badly affected.

As a climate campaigner and researcher from Fortaleza, Juaci Oliveira is undertaking key programs that tackle the crisis from the ground up, through the implementation of programs that address the specific needs of the people and communities most impacted by rapid climate change.

We spoke with Oliveira about how working with local communities to harness real change is essential, the climate action of young people, and how knowledge can help empower us all to call for greater climate action, from the federal level to the local level.

What’s unique about Brazil’s Northeastern region, and Ceará, and why are you fighting to protect them?

This specific coastal zone in the state of Ceará, and all its ecosystems, are home to a diverse range of marine biodiversity that makes it extremely unique to Brazil. These territories are also home to Quilombola communities and various Indigenous communities, who today continue to fish and farm the land, and who rely on its survival.

Already there’s a long list of endangered and extinct species of native sea life — I’m working with communities to help preserve and protect their existence.

Could you tell me more about the environmental and sustainability work you do?

I started my environmental career in 1993, in Ceará, after helping to launch the Cetacean [a mammal group including whales and dolphins] Study Group of Ceará, at the Laboratory of Marine Sciences LABOMAR of the Federal University of Ceará.

The importance was to bring research knowledge to local communities through the discovery and utilization of the local knowledge of fishermen and traditional peoples, eventually putting a stop to the extinction of the local Cetacean species.

I worked on the research and conservation of the “Boto Cinza” (the local Guiana dolphin) developing environmental education projects with local fishermen and coastal communities based in the area, and in 2000, I started the same line of work for the Manatí or marine manatee. This journey led me to develop two beach cleaning campaigns, currently coordinating two projects: Cleaning the World Ceará and the Environmental Travel Station.

What’s the main goal of the projects, and why did you start them?

Both projects were initiated to continue over two decades of critical local conservation, and environmental sustainability work to preserve our local coastal areas. We launched Cleaning the World Ceará as a way to mobilize society around the urgent need to clean the natural areas of our local coastal areas in Fortaleza, and the greater Ceará region.

Currently, the program encourages awareness, and reduces, removes, and generates data about garbage located in local coastal environments, such as the sea, beaches, dunes, mangroves, rivers, lagoons, and forests.

Similarly, the Environmental Travel Station project also works to raise awareness about the importance of ocean conservation, working with local communities to learn more about the local biodiversity of our area.

Our goal is to show people how they can participate in transforming ecosystems in a planned and sustainable way, by putting a stop to local ocean pollution, and helping individuals see how they can co-exist and have a positive impact on their local ecosystem.

How has climate change impacted your community, and how do people feel about sustainability?

Droughts and lack of rain have affected local farmers and fishermen, affecting subsistence farming, economic production, and their livelihoods. Today, [sustainability] is still a relatively new concept that is poorly understood in these communities, but luckily [the communities of Ceará] continue to practice sustainability through their culture. 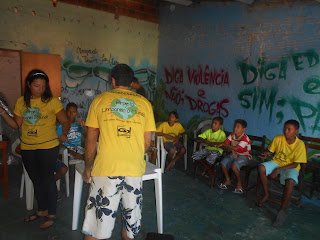 The team from Limpando o Mundo visits a school in Fortaleza, Ceará to educate groups on the climate change and the importance of ocean conservation and preservation. Credit: Limpando o Mundo 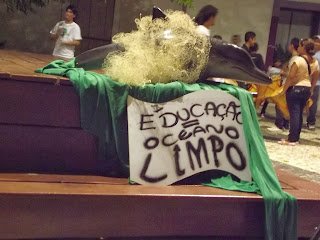