She didn’t win this medal but she sure won our hearts! 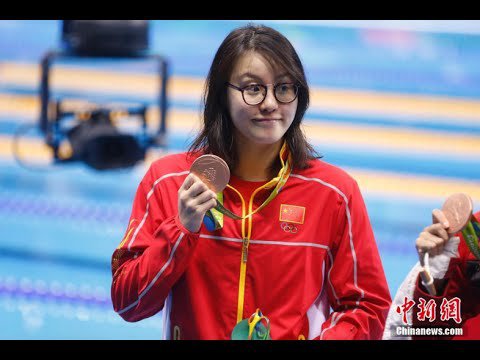 Chinese Olympic swimmer Fu Yuanhui was already a fan favorite of the internet after she showed more joy at earning a bronze medal in the 100m backstroke than most people experience in their entire lives.

But then she openly discussed her period in an interview, breaking sporting taboos and earning more praise from around the world.

When you get off work early #FuYuanhuipic.twitter.com/WqLyHHg4Wb

After the Chinese women’s swimming team narrowly missed winning a medal in the 4X100-meter medley relay on Saturday, Yuanhui was seen bending over as her teammates were interviewed.

Yuanhui stood up, visibly in pain as the interviewer turned to question her, venturing a guess that she must be suffering from a stomach ache.

“It’s because I just got my period yesterday,” Yuanhui responded, “so I’m still a bit weak and really tired. But this isn’t an excuse for not swimming well.”

With her candor, not only did Yuanhui break the taboo surrounding menstruation and female athletes, but she also corrected the misconception that women cannot swim while on their period. She also received praise and adulation from her fans in China, where open discussion about menstruation is limited.

Read More: The First US Olympian to Wear a Hijab Wins a Bronze

Support for her poured in on Weibo, the Chinese social media platform often compared to Twitter.

One male user wrote, “To compete during her period and still feel bad about placing fourth: Fu Yuanhui, you are amazing. You are our pride.”

Another fan one posted, “Only those who have gotten their periods know how deathly painful it can be. You are too awesome.”

A third fan wrote, “It is a normal physiological phenomenon, so why can’t we mention it? Fu Yuanhui is awesome!”

Yuanhui’s interview also sparked a debate about whether or not it was hygienic for women to swim while on their period, with one user pointing out, “Don’t talk to me about staining the pool red or taking medicine to stop one’s period,” a female commenter wrote. “Haven’t you heard of something called a tampon?”

Twitter users around the world also took notice of Yuanhui.

Yuanhui’s honesty is absolutely refreshing in a sports culture that still sees women’s periods as a taboo subject. https://t.co/JrKC0tdrq5

Yuanhui has previously won a bronze medal in the 100 meter backstroke, and is widely loved for her uninhibited interviews, animated expressions, and exuberant personality. The 20-year-old has also been lauded for managing to stay cheerful and light-hearted despite the intense pressure that Olympic athletes face.