This is why it’s important. 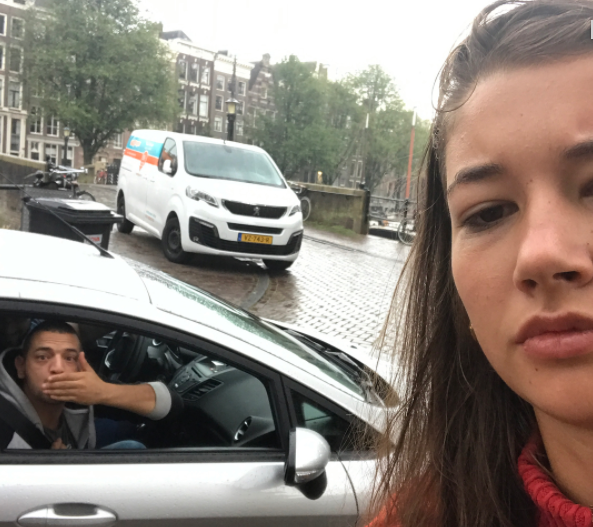 The blow of a kiss or a honk of a horn — the harassed could be any woman, in any place, at any time.  But a 20-year-old student from Amsterdam is refusing to let her perpetrators get away with it. And, no, her name is not “darling."

*honks at me 3 times with his scooter, approaches from behind and cuts off my way* "God bless, When I see you, all I get is wild thoughts, wild, Wild Thoughts!! Darling" *honks again 3 times* #dearcatcallers

One month, 30 posts, and nearly 50,000 followers later, two observations become starkly clear. Firstly, it appears that women from all over the globe relate to Jansma experience in the Netherlands. And second, the men captured in the photographs seem to have no idea what the problem is.

“They’re not at all suspicious because they find what they do completely normal,” Jansma said. Over the course of the whole month, just one man questioned why she was taking a selfie. Indeed, in an interview with Het Parool, Jansma said that the very first man she photographed even responded “with enthusiasm.”

#dearcatcallers ... after following me for straight 10 minutes "sexy girl Where you goin'?? Can I come with you ?" ...

“This Instagram has the aim to create awareness about the objectification of women in daily life,” Jansma wrote in her very first post on August 29. “Since many people still don’t know how often and in whatever context ‘catcalling’ happens, I’ll be showing my catcallers within the period of one month.”

Catcalling is a global problem. Women everywhere are painfully used to wolf whistles and bumptious barking. But even 45 million hits on a crucially insightful viral video can feel like howling at the moon. Surely the clue is in the name: dogs call out cats when out for walkies. Is it to pay them a compliment? No — it’s just because they’re hungry.

#dearcatcallers "I know what I would do with you, baby"

Now, Jansma’s project is set to be continued all over the world.

“My month of posts has ended, but it doesn’t mean that catcallers are in the past as well,” her most recent Instagram post reads. “To show that it’s a global phenomenon and this art-project is not only about me, I’ll pass on the account to different girls around the world.”

From the very first day of 2018, street harassment in Amsterdam will be punishable by a £170 fine, according to the Independent. It follows a similar ruling in Rotterdam, where any kind of sexual harassment will lead to three months in jail. The Netherlands are clamping down on catcalling — and they’re not the only country to identify sexual harassment as an issue.

Catcalling is a very public symptom of much wider societal ill: some men just do not view women as equal human beings. Often, such a damaging worldview can even be enshrined in law — from legal child marriage to domestic violence. Help Global Citizen fight gender inequality by asking developed countries like Australia to champion the repeal or reform of laws that discriminate against women and girls.