Anishinaabe Teen Has Been Nominated for a Global Peace Prize

Autumn Peltier is promoting the protection of sacred waters across the world. 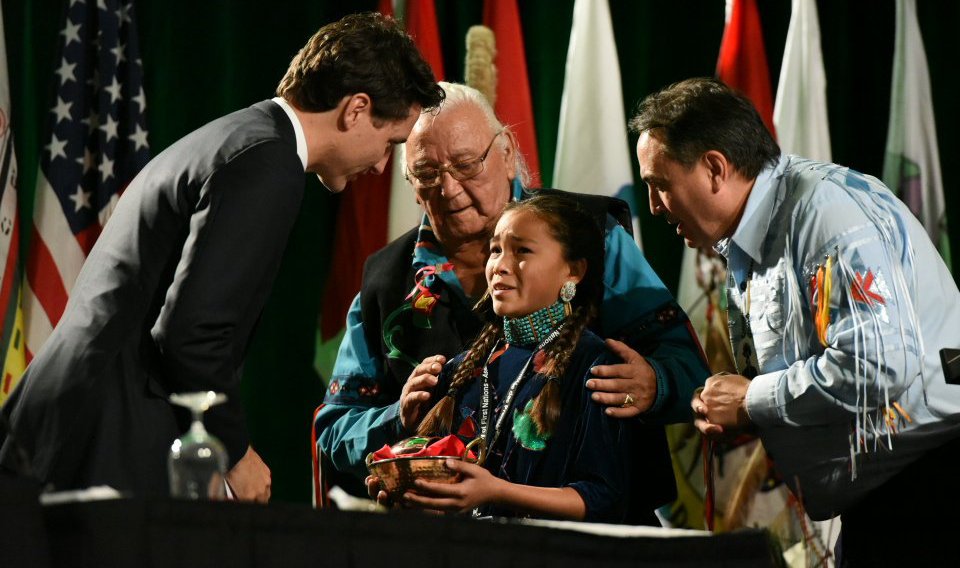 Autumn Peltier already has years of advocacy behind her. She’s met the prime minister, she’s attended the Assembly of First Nations Annual General Assembly and she’s marched on the highway in the name of water protection. At just 13 years old, Peltier is now a nominee for the International Children’s Peace Prize.

The 151 nominees for the International Children’s Peace Prize were recently announced and the only Canadian candidate is this Anishinaabe teen from Wikwemikong First Nation.

Peltier has been advocating for clean drinking water since she was about 8 years old and is already considered a water protector — just like her aunt Josephine Mandamin, who received the Lieutenant Governor's Ontario Heritage Award for Excellence in Conservation in 2016.

Launched in 2005, the International Children's Peace Prize is awarded to a child who has worked to improve children’s lives around the world.

Take Action: Share The Story Of How Clean Drinking Water Changed the Lives of 3 Women in Northern Ghana

Peltier has been recognized internationally for her work. In 2015, she was invited to the Children's Climate Conference in Sweden.

The point of the conference was gather children from 32 countries to draft their demands to the leaders of the world. The communique was then delivered to the 2015 United Nations Climate Change Conference in Paris.

“I like to share that water is really sacred. Water is life. Mother Earth doesn't need us, we need her,” Peltier told CBC.

Peltier was asked to introduce Justin Trudeau at the Assembly of First Nations Annual General Assembly in 2016. She had prepared a speech for him, but was only given a few moments to interact with him.

Read More: Hundreds of Refugee Children Are Still Stranded A Year After Calais ‘Jungle’ Was Demolished

“I said ‘I'm very unhappy with the choices you’ve made’,” Peltier recalled. “And he said ‘I understand that.’ And then I started crying and then after that, all I got to say is, ‘The pipelines,’” the teen told The Huffington Post Canada last year.

She said that Trudeau responded by promising that he would protect the water.

Among her inspirational feats, Autumn launched a national call to action in November last year. She invited everyone to participate in the shutdown of highways across Canada for an hour on Dec. 5 as a way to promote water protection. She stood with her mother on a highway in Espanola, Ont.

“I cry watching video for Standing Rock,” Autumn said in her call to action, “We shouldn’t have to fight for our water, we should just be able to have clean drinking water.”

The teen works to spread awareness about protecting water in various communities and to the youth.

“You were only given one planet. And we’re destroying it,” she pleaded. “It’s not just in North America where we need clean drinking water, it’s all over the world.”

The International Children's Peace Prize will be awarded on Dec. 4 in the Netherlands.

Global Citizen campaigns on the United Nations Sustainable Development Goals including issues that relate to water and sanitation, as well as citizenship. You can take action here.