B.C. is in a state of emergency and nearly 45,000 residents were forced to leave their homes. 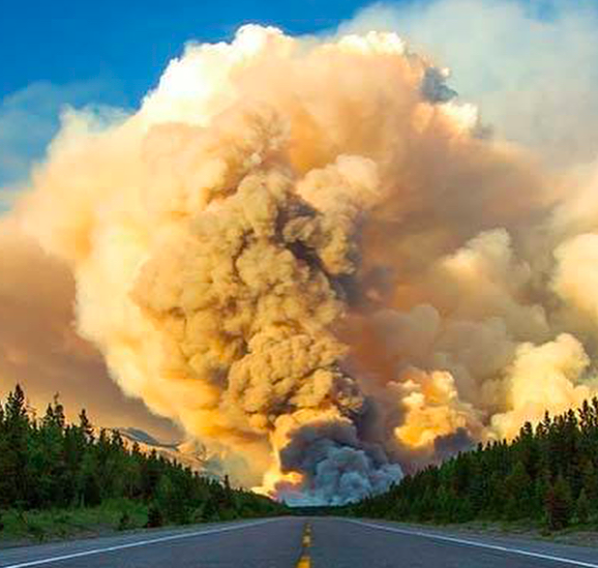 As the blazing British Columbia wildfires continue, experts say climate change is at least partially to blame for the devastating fires we’ve seen so far.

More than 160 wildfires are currently burning across the province, mostly in the central and southern Interior. Nearly 45,000 people have had to leave their homes, forcing thousands of people into evacuation centres.

But it’s not just B.C.’s recent wildfire that is cause for concern. Devastating fires like this, or the one that tore through Fort McMurray last year, seem to be becoming more frequent — and more severe.

Read More: The Climate Catastrophe in Alaska Nobody Is Talking About

“These were not one-offs. It is not a fluke,” Mike Flannigan, a professor of wildland fire at the University of Alberta, told the Toronto Star back in May. “It is going to happen again.”

John Innes, the dean of UBC's faculty of forestry who specializes in climate change and forest fires, among other things, says that B.C.’s intense fire was caused by climate change as well as other weather factors.

The Pacific Decadal Oscillation and El Niño overlapped this year and that has caused a hotter and drier summer season, according to Innes. Climate change then adds to that — the way fire expands depends on how warm or dry an area is and those factors seem to be affected by climate change.

“Longer term, we will see more fires. We will see the fire season extending, it will start earlier, it will go on later, and the fires that we get will be more intense,” he told CBC.

To adapt to climate change, B.C. is planting more resilient trees in areas affected by a mountain pine beetle infestation.

A 2014 draft report by the Wildfire Management Branch explained that the infestation of pine beetles has intensified due to climate change. These pine beetles kill the trees, and increase the risk of fires by providing the perfect fuel — the report says 800,000 hectares is taken over by dead pine stands every year.

“We have to try and make sure that our forests are as resilient as possible,” Innes said.

Natural Resources Canada has also indicated that wildfires occurrences and behaviours are being affected by the influences of climate change and climate variability.

The department says that while they cannot confirm the changes in the patterns of wildfires are directly linked to climate change, there are changes taking place nonetheless.

This is going on in British Columbia.. We have a solution to fix these BC wildfires but unfortunately we cannot always pay for these missions ourselves and need funding. Last year, Fort Mcmurray was the biggest, most damaging fire in Canadian history. We were supported and proved that this can be done with weather shamanism using powerful prayer and 144 sided phi crystals at sacred vortices. We made it pour so much it actually caused a massive flood! I was also down in California in November and brought rain as it needed it very much. This is an ancient technology and we have proved time and time again, the level of our abilities and actually producing results. For those that wish to assist us with funding, please inbox me. Thank you #bcwildfires #bcwildfires2017

Areas burned by forest fires annually have increased over the second half of the 20th century in the northwestern boreal regions of Canada, while the southern boreal forest has seen a decrease. Some of this has been attributed to climate change — increased heat and greater precipitation could be causing these changes, according to Natural Resources Canada.

Increasing temperatures have made forests much drier than before. In 2016, Fort McMurray saw one of the driest springs in the area in the last 100 years.

“Proactive infrastructure, land and resource management is required to meet the challenges of climate change and an ever growing wildfire risk and threat to communities, critical infrastructure and natural values in British Columbia,” according to the the Wildfire Management Branch report.