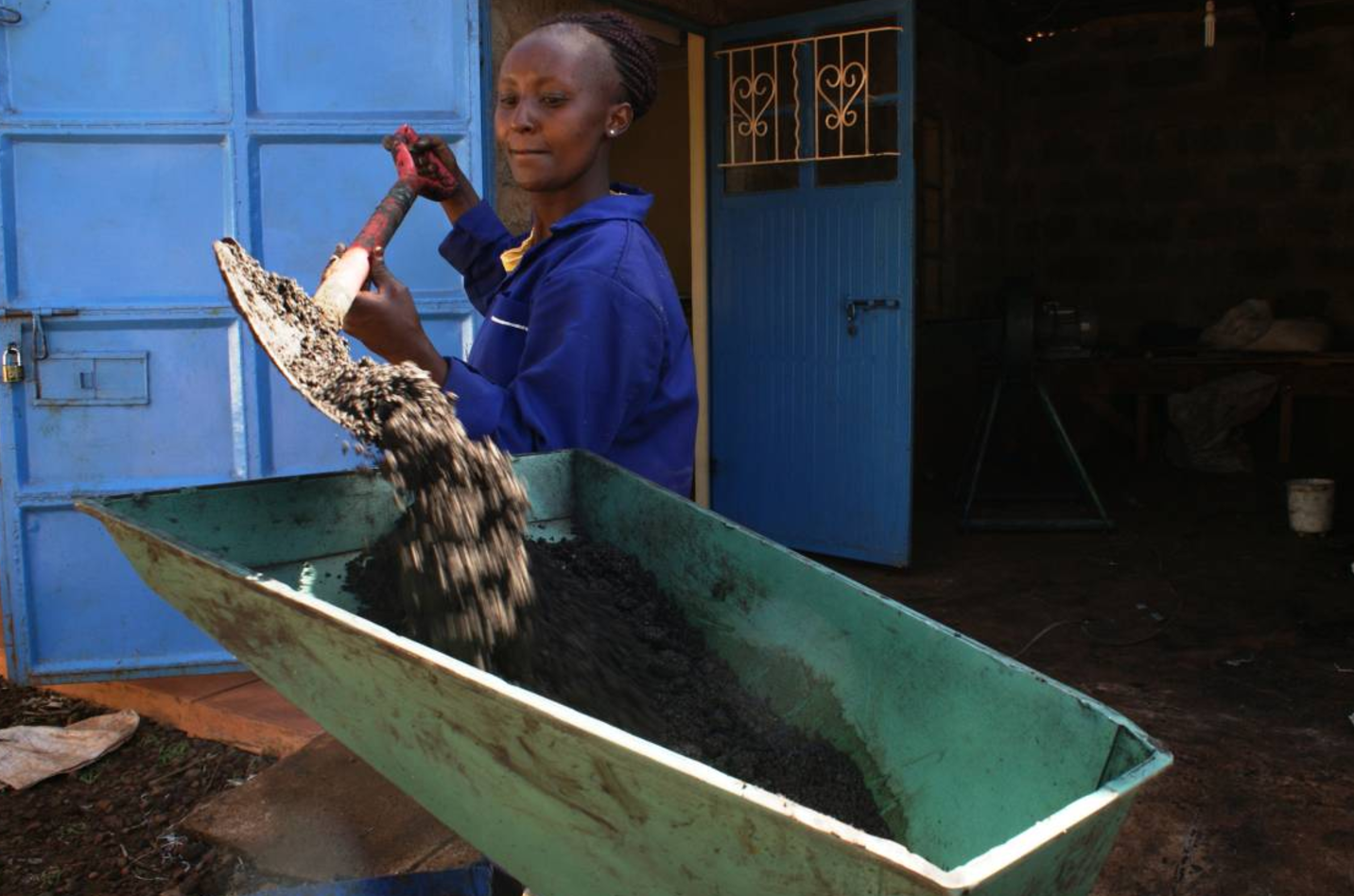 NYERI, Kenya, April 27 (Thomson Reuters Foundation) - Perched on a stool in a tin shed, Nyawira Njau carefully lines the top of a dozen cookstoves with aluminium foil. A call on her mobile interrupts her concentration, and she answers with one word: "Tomorrow".

"That was an order for 20 cookstoves to deliver in Murang'a County," she explained. Making and delivering cookstoves in this central Kenyan region has been Njau's job for the past year.

Unusually long drought has caused fields and soil to dry up around Nyeri, forcing men to take on seasonal work as road or construction builders. The burden of maintaining the household with few resources falls on women like Njau, who must look for other sources of income than farming.

Read More: Why Women Need to Be Leading on Climate Change Around the World

A growing number of them are setting up clean energy businesses, such as selling cookstoves that burn less firewood than traditional stoves, as an alternative livelihood.

The new businesses not only give women a more resilient income in the face of climate change but help protect forests, which in turn regulate rainfall and help stave off drought.

Faced with poor crop yields due to irregular rainfall, she decided to sell her stock of maize and potatoes last year to market traders to raise 30,000 Kenyan shillings (about $300).

She then used that as capital to buy the equipment needed – a shed and cookstove materials – to start her own business.

"It used to take me three months to make that amount by growing and selling vegetables," she said. "The money now allows me to feed my family and pay for my two children to go to school."

Njau does not regret making the switch from farming.

"Last year there was very little to harvest because of the lack of rain," she said, gazing at drying shrubs on her farm. "It looks like it will be the same this year for farmers."

In the offices of an "Imarisha" - a community-based organisation whose name in English means "to make better" - in nearby Misha village, trainer Winnie Muthoni shows Njeri Kiraithe how to mix charcoal dust, flour and sawdust in a plastic container to make charcoal briquettes.

Muthoni then empties the container into a green compressing machine that turns out black briquettes, which can be burned for energy.

Kiraithe is one of hundreds of women who have been trained since 2014 to start their own clean energy business.

The initiative is part of the Women in Energy Enterprise in Kenya (WEEK) project, funded by development charity Practical Action, which encourages women in several Kenyan regions to become energy entrepreneurs.

Kiraithe, who said she enlisted for the free training because she couldn't make enough money from farming, intends to sell her stock of potatoes to raise about 20,000 shillings ($200) to start a charcoal briquette business.

"The training has taught me that charcoal briquettes are in high demand in central Kenya's highlands," she said.

"For instance, chicken farmers prefer to use briquettes to keep their roosts warm at night because the smoke they emit does not make you choke like firewood does."

Read More: Why Gender Equality Is the Missing Link Between Food Security and Climate Change

"Briquettes also protect the environment because they are made of waste," she added.

Muthoni, a former farmer herself, said that making charcoal briquettes has faster and higher returns than farming.

Maina agrees, saying that "clean energy businesses have better returns because the women can potentially make money every day – provided there are orders – whereas farming is a one-off season".

Maina estimates that the WEEK project can create over 450 jobs across Kenya by the end of the year, adding that it plans to also recruit men as trainees to tackle youth employment.

Njau's husband Philip gave up his construction job to help her manage and grow their cookstove business.

"Men should also be involved in this type of business because the good returns create harmony at home," he said.

Other trainees hope to become trainers themselves.

"When my business flourishes, I plan to train and employ other women too so that they can be self-reliant," Njeri said. (Reporting by Kagondu Njagi, editing by Zoe Tabary and Laurie Goering. Please credit the Thomson Reuters Foundation, the charitable arm of Thomson Reuters, that covers humanitarian news, climate change, resilience, women's rights, trafficking and property rights. Visit http://news.trust.org/climate)