Anti-Trump Protests Grow Across US, Canada, and London

Most of them are non-violent. 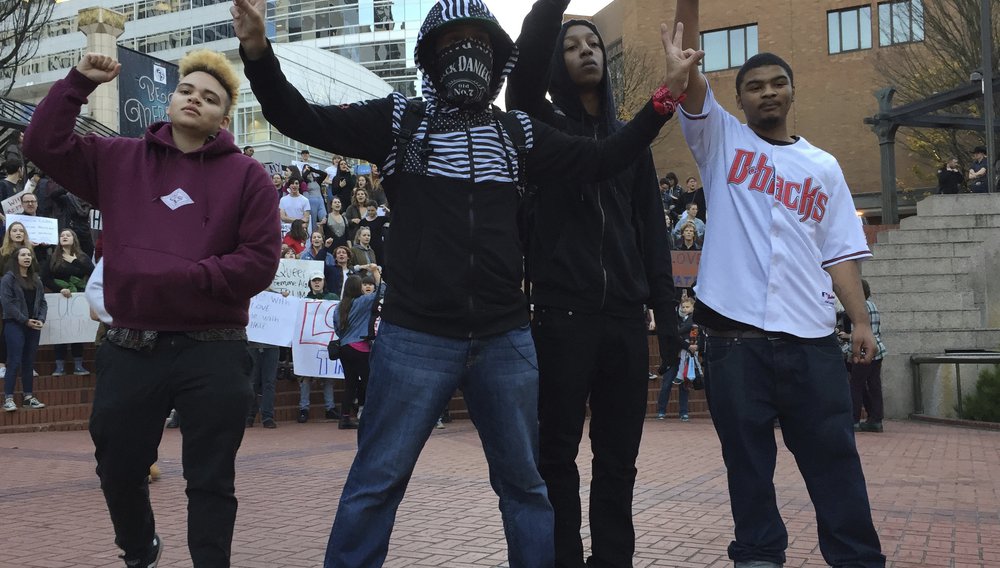 For a second night since Donald Trump's election to the presidency of the United States, protests — some peaceful, others violent — erupted around the US and in other countries.

The Associated Press described Portland, the liberal mecca that voted overwhelmingly for Hillary Clinton, as the “epicenter” of protests against President-Elect Donald Trump that have swept across the nation. Indeed, Portland saw some protests become destructive as protesters smashed store windows, lit firecrackers, and broke car windows.

The Portland Police department classified the protests as a riot around 9 p.m. PST.

“Some in crowd trying to stop property damage, others threatening them not to interfere,” the Portland Police Department posted to Twitter.

Some in crowd trying to stop property damage, others threatening them not to interfere. Riot now at Northwest 11th & Lovejoy in the Pearl

By the end of the night, 26 people were arrested for vandalism and unlawful assembly.

Protestors arming themselves with rocks from construction site. Police advising crowd this is an unlawful assembly.

Many in crowd trying to get anarchist groups to stop destroying property, anarchists refusing. Others encouraged to leave area.

Police advising crowd to disperse. This is an unlawful assembly. Objects being thrown at police.

Portland’s protest was one of many that have occurred during the past two nights, though most have been peaceful gatherings.

On Wednesday, peaceful protests broke out in major cities across the country including New York, Chicago, Seattle, Philadelphia, Dallas, Boston, and Los Angeles.

Read more: ‘Not My President’ Rings Across Major Cities as People Protest Trump

Protests against the Trump presidency have spread abroad, as well. Vancouver and London have both experienced anti-Trump rallies. In London, anti-Trump protesters clashed with members of the British far-right near the US Embassy.

The forms of protest across the country have been varied. On Wednesday, in the nation’s capitol, which voted overwhelmingly for Clinton, protesters held a candlelight vigil and ‘hug-in.’ In Los Angeles, an effigy of Trump’s face was set on fire. And in high schools across the country — in Berkeley, Des Moines, Phoenix, and other cities — students staged walkouts in protest of the president-elect.

Trump himself reacted in different ways to the mounting protests, first calling them “unfair” and “incited by the media” and later recanting his statement, saying: “Love the fact that the small groups of protesters last night have passion for our great country. We will all come together and be proud!”

Just had a very open and successful presidential election. Now professional protesters, incited by the media, are protesting. Very unfair!

Love the fact that the small groups of protesters last night have passion for our great country. We will all come together and be proud!

More protests are planned this weekend and next week in cities from New York to Tucson to Tallahassee.