Amid Turmoil at the White House, Press Group Says Trump’s Administration Is Bad for Democracy

This definitely was not "fake news."

He is the first high-profile White House official to quit over a decision made by President Donald Trump — in this case, the decision to hire Republican donor Anthony Scaramucci as communications director. A former lawyer and CEO, Scaramucci has zero experience in the communications field.

Sarah Huckabee Sanders, the deputy press secretary who has shown a willingness in recent weeks to defend Trump at all costs in the briefing room as a fill-in for Spicer, will take over, the White House announced today. Sanders is the daughter of former Republican candidate Mike Huckabee.

Read More: Brazil’s President Charged With Corruption: Why That Matters for Global Citizens

The staffing change, and the apparent implosion of the White House’s press department, belies an administration whose relationship with the press has, according to a journalism advocacy group called the Sunlight Foundation, become a “threat to our democracy.” 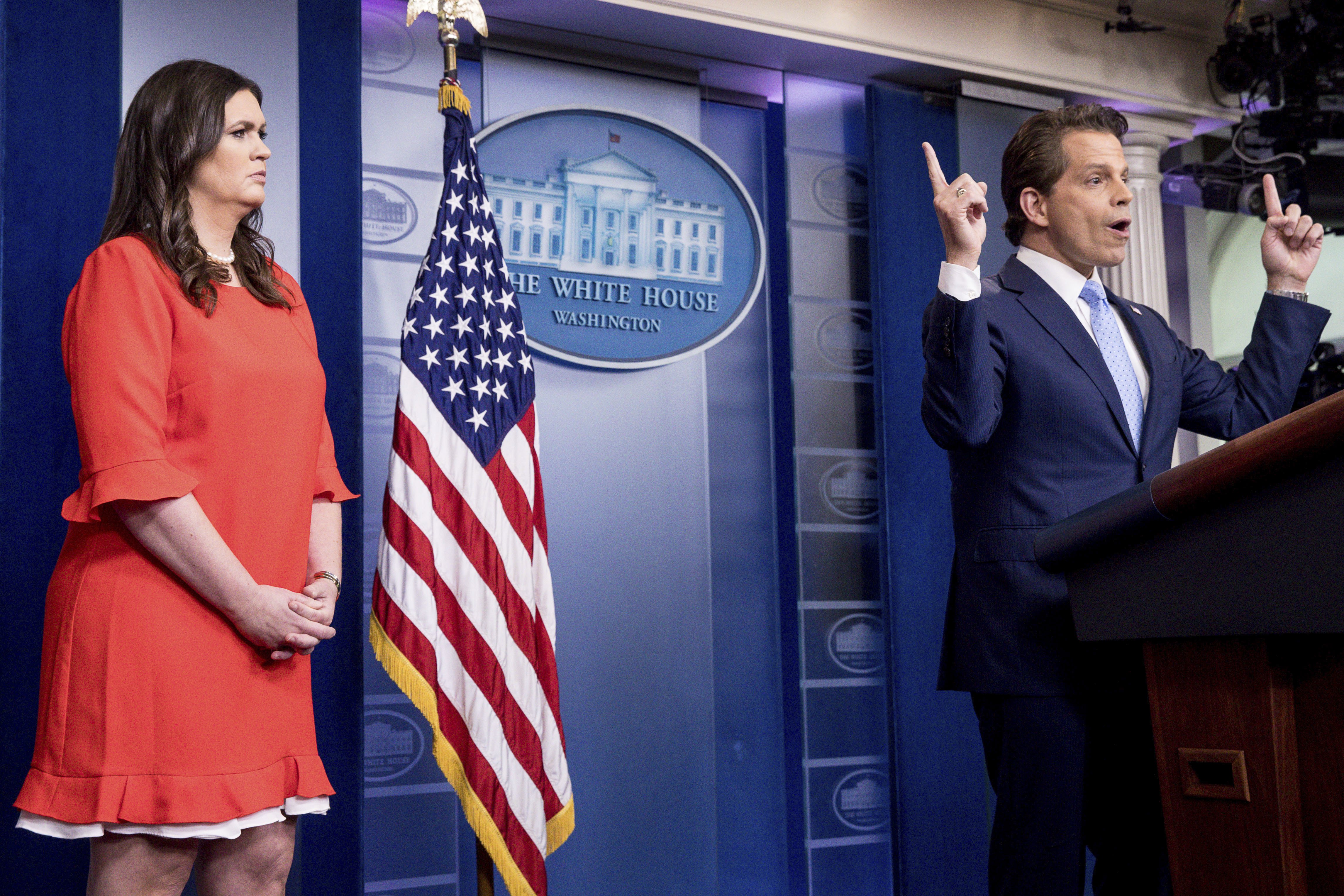 “As organizations committed to the First Amendment right of freedom of speech and the press, we are alarmed by the efforts of the president and his administration to demonize and marginalize the media and to undermine their ability to inform the public about official actions and policies,” a letter from the group read.

The media helps ensure that the government remains accountable and transparent, two qualities that are necessary for any country to progress toward the United Nations’ Sustainable Development Goals, the UN’S framework for building a better world.

Read More: Fired FBI Director Comey on His Firing: ‘Those Were Lies, Plain and Simple’

The White House briefing room has always been central to that goal — it is a loud, contentious, buzzing place, a place representative of United States-style democracy. There are the reporters shouting questions at the press secretary, demanding answers as to what the government is up to behind closed doors. Then there’s the press secretary defending the president, oftentimes shouting back at reporters about what the media got wrong.

But according to the Sunlight Foundation, the relationship between President Trump, his press secretaries, and the media has crossed a very serious line.

“All of this recently culminated in the president calling the New York Times, CBS, CNN, ABC, and NBC News ‘the enemy of the American People!’ and in the exclusion of representatives of various media outlets from a press briefing,” the letter read.

“In these and other examples, the president and his designees have attempted to villainize and discredit the press for any reporting he dislikes. However, the job of the press is not to please the president but to inform the public, a function that is essential to democracy,” it said.

The letter was signed by more than 80 journalism, civil rights, and free speech groups, including the American Society of Journalists and Authors, the Association of Schools of Journalism and Mass Communication, the Center for Media and Democracy, the National Press Foundation, and PEN America.

The letter was released before Trump had tweeted out old video footage of himself at a professional wrestling match, wrestling someone to the ground with a CNN logo over the person’s face (the foundation’s letter was published on International Women’s Day, March 8, in honor of pioneering female investigative journalist Ida Tarbell).

But shortly after the release of the wrestling video, the National Rifle Association released a commercial advocating for guns rights that showed the New York Times office building, and called on NRA supporters to “fight the violence of lies with the clenched fist of truth.”

The media-bashing and incitement to violence toward members of the media is frightening on its own, but the Sunlight Foundation’s deeper point is that the anti-American attacks on a free press could lead to the end of a democratic government.

“Our Constitution enshrines the press as an independent watchdog and bulwark against tyranny and official misconduct,” the letter says. “Its function is to monitor and report on the actions of public officials so that the public can hold them accountable. The effort to delegitimize the press undermines democracy, and officials who challenge the value of an independent press or question its legitimacy betray the country’s most cherished values and undercut one of its most significant strengths.”

When it comes to the relationship between the press and government in the United States, there has long been a saying favored by journalists: “Sunlight is the best disinfectant.”

As the White House installs a bevy of new press officials to handle its relationship with American journalists, The Sunlight Foundation and the 80 signatories of its letter urge Trump to uphold that most American of values: the First Amendment.