No Surprise There: All 6 US Nobel Winners Are Immigrants

What would happen to the country’s innovation and ambition without the engine of immigration? 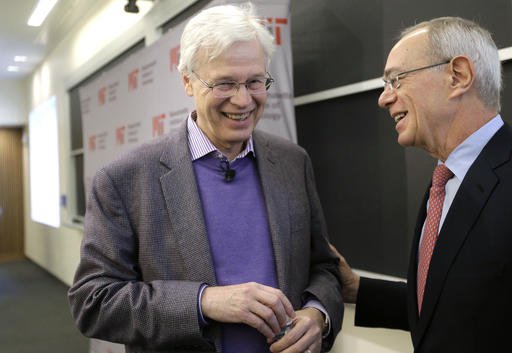 The US netted six Nobel Prizes in Science this year. And all six were earned by immigrants.

This year, the physics award was won “for theoretical discoveries of topological phase transitions and topological phases of matter,” chemistry concerned “the design and synthesis of molecular machines,” and the economists were recognized for “for their contributions to contract theory."

The economists, Oliver Hart and Bengt Holmström, explored the benefits, incentives, and shortcomings of contracts across various industries.

The chemists, Sir J. Fraser Stoddart and Bernard L. Feringa, were able to create a machine that is a thousand times smaller than a strand of hair, with all the parts made from tiny molecules. Eventually, scientists hope to use these machines for a range of medical and other purposes such as the targeted release of drugs in the body and for improved energy storage.

Read More: A Taco Truck on Every Corner? Yes, Please, Says the Internet

For an explanation of the physics award that went to F. Duncan M. Haldane and J. Michael Kosterlitz, go here. It’s being hailed as a bridge between the theoretical study of topology and physics.

All awards are recognized breakthroughs that will lead to many more discoveries and applications in the future.

Science is a cumulative, collaborative field that depends on openness. If all scientists hoarded their discoveries and refused to share their knowledge, not many advances would be made. We probably wouldn’t have electricity, cars, the Internet, refrigeration, and so many other gradual inventions.

This is especially true today as scientific fields are beginning to overlap more often, converging in areas such as medicine and artificial intelligence.

In fact, many scientists are beginning to upload their work straight to the internet to avoid the delay of publishing in a scientific journal with the ultimate goal of spreading information and accelerating collaboration.

This idea of openness has, in many ways, been the defining feature of the US. Nearly all family trees in the US can be traced to immigration. What would happen to the country’s innovation and ambition if not for the engine of immigration, of so many perspectives and cultures blending?

Apple founder Steve Jobs’ father, for example, was a migrant to the US from Syria. Sergey Brin, the co-founder of Google, immigrated to the US from Russia. And then there was Albert Einstein, arguably the most famous scientist of all time, who traveled to many countries before finding solace in the US.

Read More: 17 Immigrants the World Would Be Very Different Without

Sir J. Fraser Stoddart, one of three laureates in chemistry, took this idea further when he spoke to the Hill earlier in the week. He said that the scientific establishment will only remain strong "as long as we don’t enter an era where we turn our back on immigration."

"I think the resounding message that should go out all around the world is that science is global," he said.