Ahmed Badr is challenging the refugee narrative through storytelling and art.

Ahmed Badr — a sharply-dressed, glasses-wearing 18-year-old — is, in many ways, your typical college student. He plays soccer recreationally, watches comedy specials on Netflix, and is spending his summer in New York City.

But, unlike many other students his age, he is also a refugee, whose home in Iraq was bombed when he was eight years old.

Along with Baghdad, Iraq, Badr has lived as a refugee in Aleppo, Syria, as well as Sioux Falls, South Dakota, and Houston, Texas.

More than 10 years after his home was bombed and his life changed irrevocably, Badr is now helping fellow refugees, migrants, and myriad other folks of dual- or multiple-identities tell their stories, as well.

Scrolling through the site Badr created, Narratio, gives readers a snapshot of the intersection of art, displacement and globalization. There is Badr’s poem, “A Thank-You Letter From the Bomb That Visited My Home 11 Years Ago,” a photo album by Shola Ogunniyi, from Nigeria, entitled “African Spirit,” and a gallery of prehispanic drawings by a Mexican-American contributor, Marcelo Villaseñor.

Narratio lives both online and in the real world, where Badr has organized storytelling workshops with high school students in Middletown, Connecticut; Fairfax, Virginia; and Houston, Texas.

As if being a full-time college student, running a website, and consulting at the United Nations Migration Agency wasn’t enough, Badr is working with fellow refugee artist, Mohamed Hafez, on an art project that recreates Syrian stories with suitcases and recording a podcast called “TOGETHER,” that also tells refugee stories.

Global Citizen spoke with Badr about his childhood, moving to Sioux Falls from Baghdad, and his refugee storytelling project Narratio: 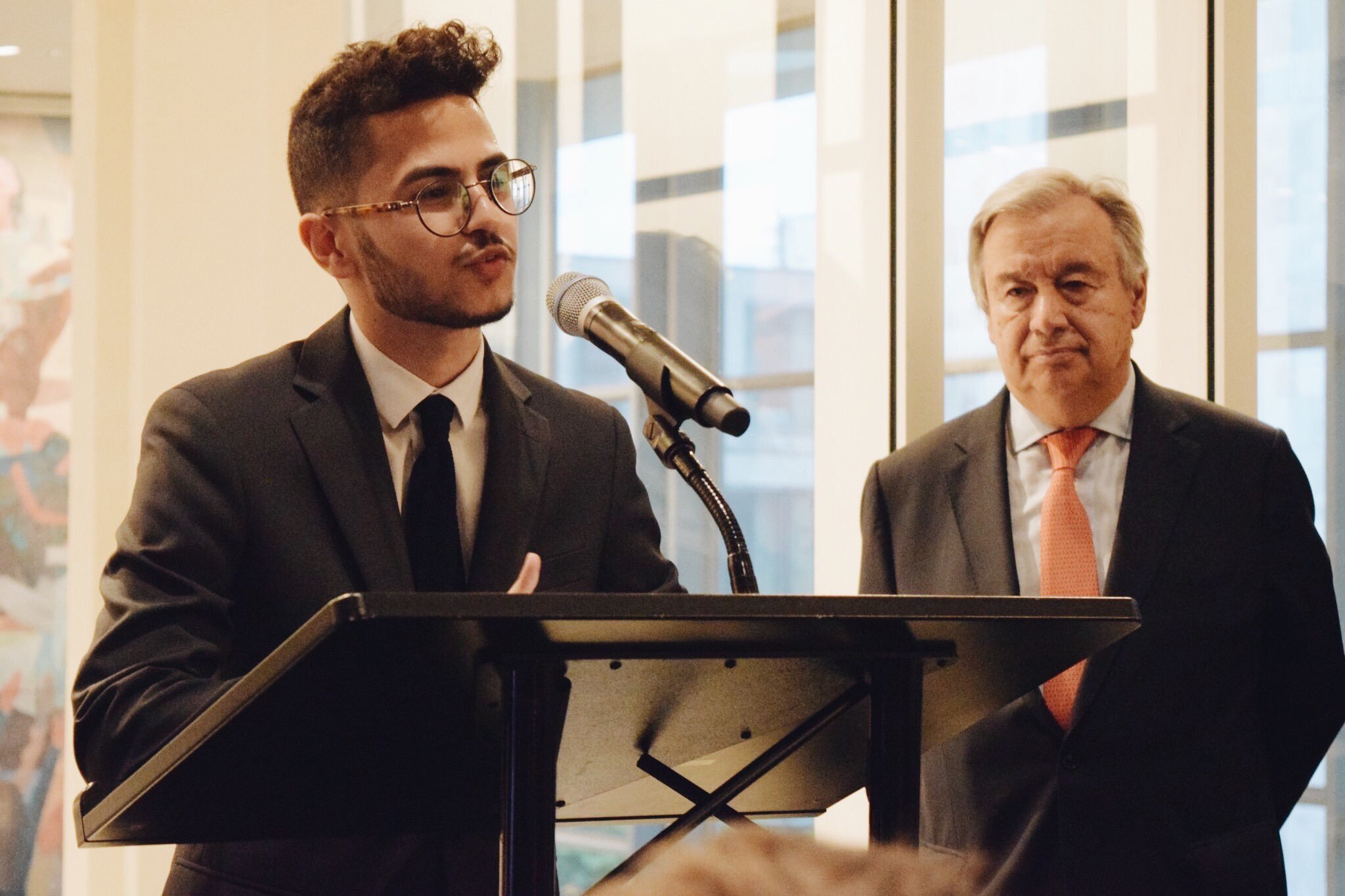 Tell me a little bit about your story.

On July 25, 2006, our house was bombed and we left Baghdad and went to Aleppo, to Syria, which at the time, was very safe. We lived there for a year and then we moved to the coast of Syria, to a small town called Jableh.

During these two years in Syria my parents were on paid leave. They had worked in Iraq for 24 years as civil engineers, and then [my dad's] paid leave was running out so they had to make a choice.

Do we stay in Syria and struggle financially? Or do you go back to Iraq, risk that safety, but be okay financially?

We would go back and forth and visit Iraq and Syria and one day my dad was speaking to a bus driver and the bus driver told my dad about this UN program that would take, at the time it was 1% of everyone that applied, and they would get resettled to either the US or the UK. So my dad applied and six months later we got a phone call and they said, “We’ve got four one-way tickets to Sioux Falls, South Dakota.”

What were your first impressions of Sioux Falls?

It was May, so it wasn’t too cold, yet, but I think the first thing I noticed was how green everything was. It was beautiful, everything was so green. It was a deep, deep green.

There’s just so many things that you are not used to, not accustomed to, in a new country. I went to this school for the first two months: it was basically a school for refugees to learn English. Then they put us into “real school.”

That was just really fun because now I was surrounded by American kids and you had people from all walks of life, backgrounds that I hadn’t really been exposed to in my life. That was really fun, but also really daunting because you have to ask yourself, “where do I fit in within this world?” 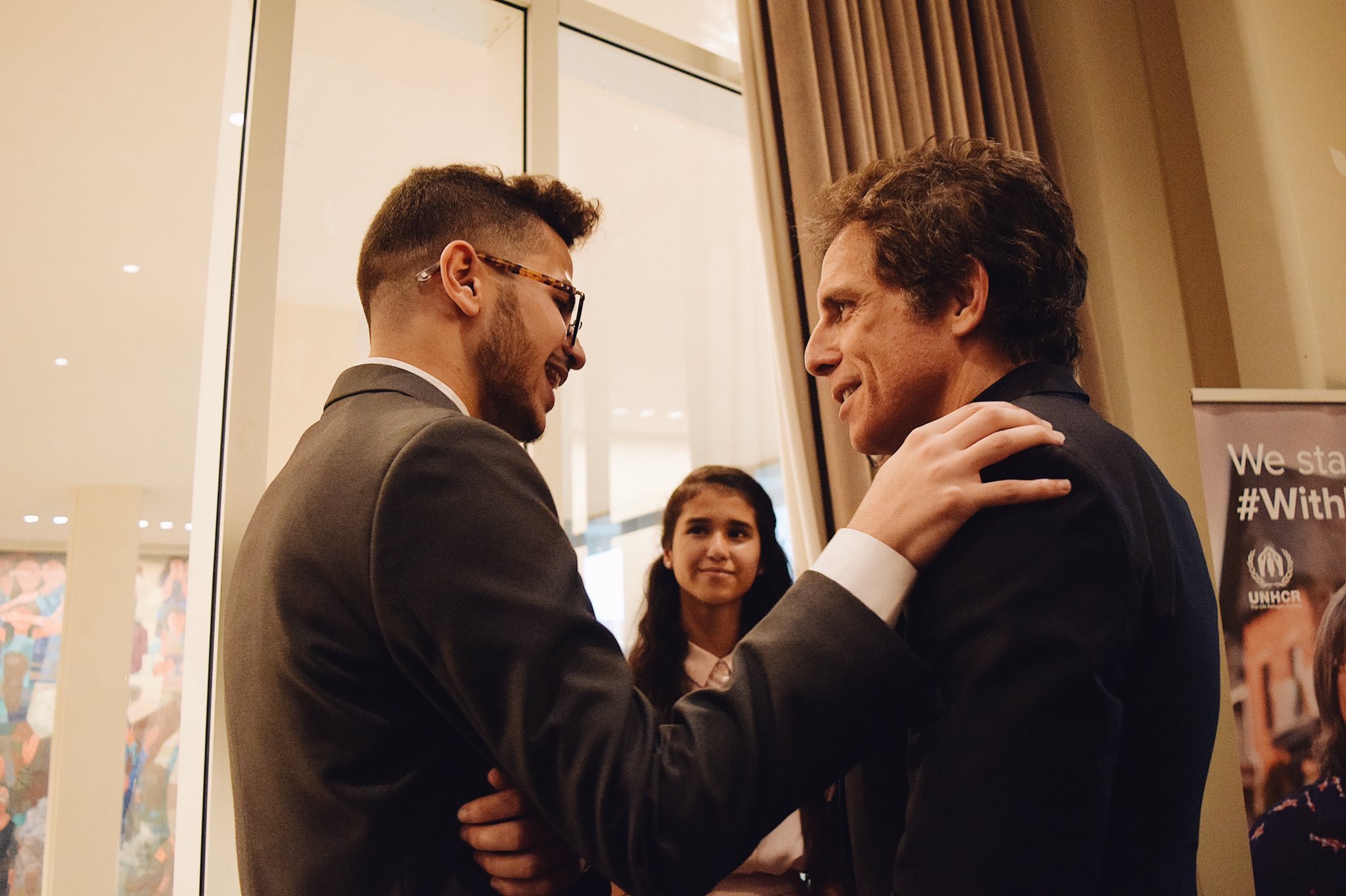 Did you feel welcomed at that time?

I think I adjusted pretty quickly. I learned that the only way to fit in was to adapt. My english wasn’t very good. I had taken classes in Syria, but it was my worst class.

At least for me, I overcame [the language barrier] by talking to people. I’m a fairly outgoing person and you can’t talk to someone if you can’t speak their language, so that was a thing that had to develop very quickly.

We were welcomed, we were welcomed in a very amazing way, first by the resettlement agency, called First Lutheran Services in Sioux Falls. The first few months you’re adjusting, you’re trying to figure out how this new country works. Once you’re past that then the real adjustment starts, in terms of, “Where do I fit in within this society? What do I have to bring to it?”

Sometimes even when people are friendly and welcoming, you still don’t feel right. I was privileged in that I could feel uncomfortable and have people around me that were understanding.

How did you develop a love for writing?

I think it started in sophomore year of high school. I was invited to this conference in Washington, called the Washington Journalism and Media Conference. That was the first time I was flying since we came to America. I had never been to DC before and basically it was this week-long conference for journalism.

I got a scholarship to go, and for that conference they said you have to start a blog or a site. So, a couple months before, I started putting up my writing and my poetry and my essays and photography. 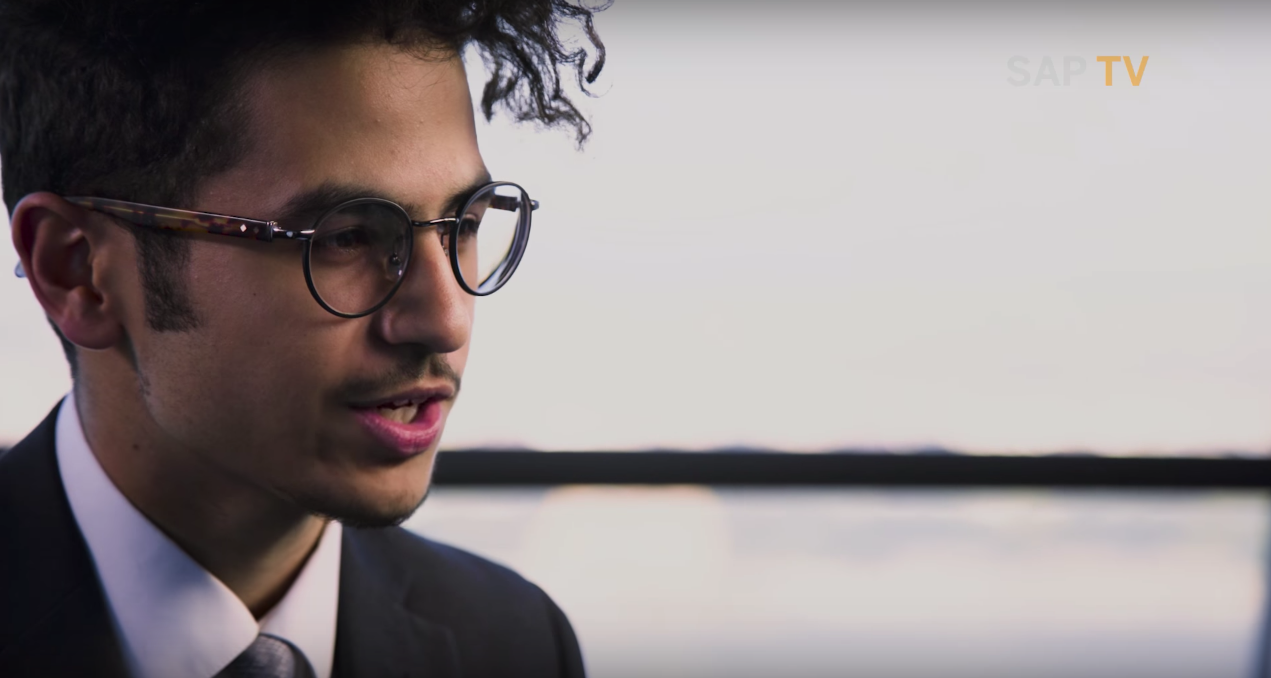 I went to that conference and all of a sudden this whole new world opened up. Like people actually cared about what I had to say and my story and this dual-identity that was starting to form. All of a sudden I was like, “Oh, wait, by writing about my experience I can connect both worlds. I don’t have to live in one or the other. I can live in the Iraqi side and I can live in the American side and I can bring them together.” And that’s something that I realized is very powerful.

Both sides are often misunderstood and one side views the other with apprehension. So to live at the intersection it’s a responsibility, I think, to bring out the important and the beautiful aspects of both.

How did Narratio come about?

That’s how Narratio was born.

Narratio is at a very basic level a platform for people to do whatever they want, specifically youth. Creating a space that wasn’t really available to me [before] was something that was really important.

Armed with this idea that, “Hey, by telling my story I can teach people my story of this dual identity I was starting to develop,” then other people of my background and otherwise can be encouraged to speak out about their own stories, and that effect can multiply.

So, Narratio is an online platform for youth empowerment through creative expression and since our founding that January — I say January, but the website went up in April — since then we’ve published a little over 60 posts from more than 15 countries and right now we’re waiting to publish another 100 posts from another 20 countries. We have 40-plus contributors from all over the world that submit. It’s been really beautiful to see it grow and to see stories of people that are similar to me.

What are some of your other projects?

This summer I’m working for the UN Migration Agency. I’m hosting a podcast called “Together,” and basically what we do is collect the personal stories of migrants and refugees all over the world. Specifically right now we’re focusing on America, but eventually in future seasons we’re going to spread out. We’re specifically focusing on refugee and migrant youth in America, so people like me! 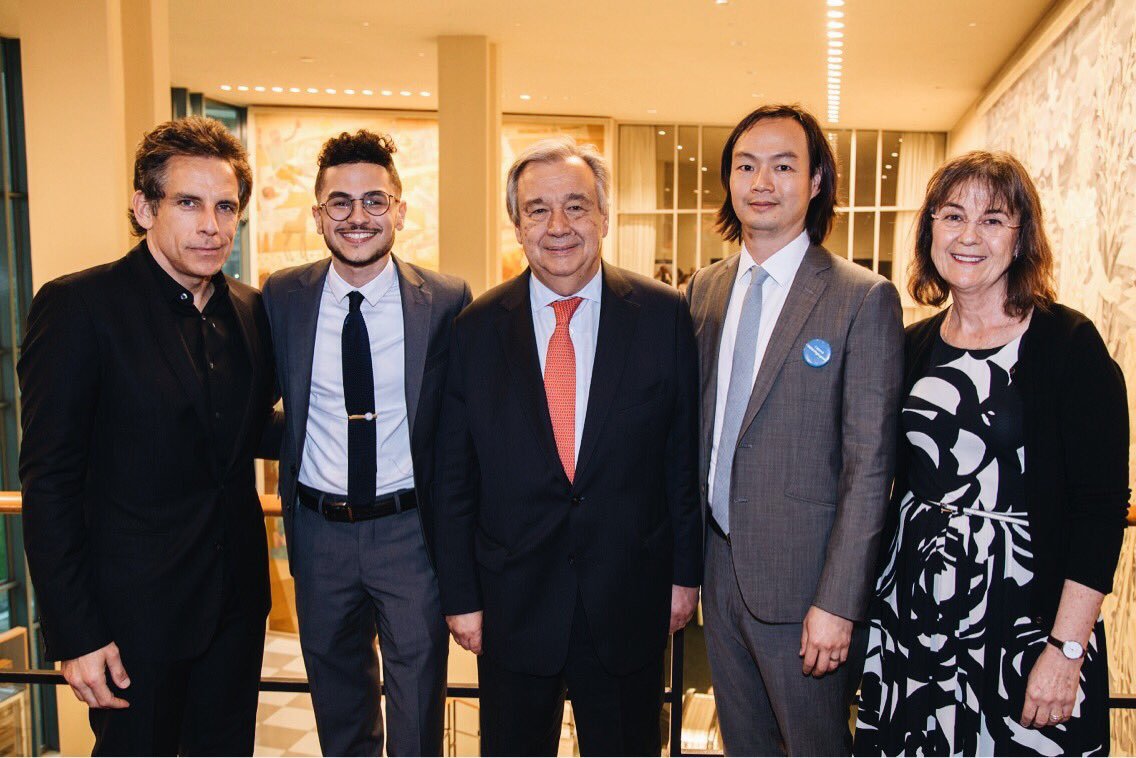 The first season is focused on my parents and a couple of my friends. It was really strange because when I talked to my parents when I did those interviews, and my little sister, I’ve never had a long conversation in English with them before because when we came to America we weren’t allowed to speak English in the house, only Arabic — so we could maintain that and preserve it.

When you hear the podcast, it’s so interesting. Throughout our journey, we’ve never really had a chance to stop and debrief about everything, and this was our chance to do that, in English.

What does it mean to be a Global Citizen?

Global citizenship, to me, is your willingness to engage with people who completely disagree with who you are, and maybe the ideas that you have, but on a more basic level who you are as a person. In my experience, whether that would be someone criticizing you for being a refugee, or for being Muslim, or for being from Iraq, there’s plenty to be ill-informed about and thus criticize. So, I think in my experience, being a global citizen and embracing that duality between the Iraqi and the American, or whatever’s on either side of that dash, the most important thing is, "How do you address those voices that are attacking you, that are attacking your identities or identity? How do you turn those negative voices into positive ones?"

With everything that I try to do, whether it’s with Narratio or with the podcast or just anything that I do, I hope to address that idea. It’s not me getting angry and yelling at them, no matter how much I may want to do that, but it’s me taking a step back and trying to understand where they’re coming from.

I’m not trying to oversimplify it. Some people are ignorant of other people’s experiences and I don’t want to ignore that, but what I’ve learned in my experience is that once you befriend the people that disagree with you, whether they disagree with who you are and your experience or whether they disagree with your ideas, once you befriend those people and you start to kind of develop a relationship, over time they’ll realize, “Oh that’s not right, that’s not true, maybe what I had in mind is wrong.” To me that can be more powerful than me preaching.

This interview has been lightly edited for clarity.