Shallal is the founder of DC’s popular Busboys and Poets bookstore and community space. 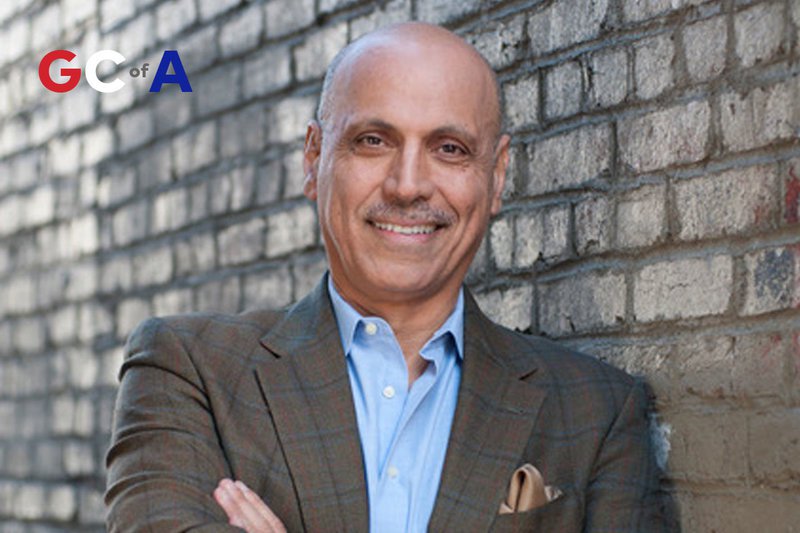 There is very little that Andy Shallal hasn’t done in the past 50 years. The 61-year-old restaurateur, peace activist, former mayoral candidate, environmentalist and muralist moved to the United States from Baghdad, Iraq, with his family when he was 11, and has since been a pillar in the Washington, D.C., community.

He is the founder and owner of several big-name restaurants, including Busboys and Poets and Eatonville Restaurant.

His restaurants place a strong focus on providing locally-grown food, and are completely powered by renewable wind energy. And not surprisingly, they’re popular spots for community gatherings.

Read more: There Was a Star-Studded Inauguration Ball Last Night Without a Trump in Sight

Taking place at the newly opened National Museum of African American History and Culture, the Peace Ball brought together a cross-section of Americans who articulated a resistance to the Donald Trump administration.

Shallal has not shied away from politics — having also run for mayor of D.C. in 2014 and having publically opposed the Iraq War in 2003. This year, he shut down all of his restaurants for the Day Without Immigrants in February.

Read more: Here Are 23 Restaurants That Shut Their Doors For the ‘Day Without Immigrants’

The son of Iraq’s Ambassador to the Arab League, Shallal’s family moved to the Arlington, Virginia area in 1966. His father stayed in the United States, and later opened a restaurant, at which Shallal worked as a teen.

He spoke with Global Citizen about growing up between two different cultures, activism, and the role of the United States in the world.

You came to the US at age 11 from Iraq. Could you tell me the story of your family coming here?

My father was a diplomat. When we came here, it was 1966. I was 10 at that time. So we came on a diplomatic mission and my father decided to stay here, to keep the family here. We made this home.

Having spent the first half of your adolescence in one country and the second half in another country, what was that experience like for you?

What did you study?

In college I studied pre-med. I was going to become a doctor. I entered Howard University Medical School for a very brief flash and then left from there. Then I ended up falling into the restaurant business really by happenstance.

Was food, cooking, cuisine always a passion of yours?

My father had a small restaurant after he decided to stay in America that we worked in, and my father owned for a few years. He wanted to make sure that we never got into the restaurant business after that. He didn’t like the business at all.

He sold his place, we went on to college, my brother studied to be an engineer, and I studied to be a doctor. My brother continued in his career as an engineer, and I decided that I didn’t want to be a doctor, and I decided to go back to the restaurant business. I think it was partly rebellion and partly because I really liked the business very much.

Read More: This Global Citizen of America Moved to Nepal and Adopted 49 Children

‘That’s the intent of it: it’s to bring the entire spectrum of the community in a place where they can intersect and interact with each other.’

So I started working in different restaurants, and really didn’t want to get into it that quickly. I wanted to take my time and think about it. I ended up being a waiter for a short time because I was promoted to management really quickly. Thereafter I decided, ‘Well, maybe it’s time for me to start thinking about opening my own place.” One thing led to another and I fell into an opportunity to open [Busboys and Poets], and have opened many places since.

How would you describe Busboys and Poets to someone who’s never been there?

It’s a gathering space, really. It has food obviously at the center of it, but it’s a gathering space. It’s got multiple layers of community spaces. So, it’s got places to meet people, places to meet together in a communal setting. They have a bookstore, of course. There’s a stage in the back where we do great events and performances. We have a bar, we have really good food. There’s something for everyone there. That’s the intent of it: it’s to bring the entire spectrum of the community in a place where they can intersect and interact with each other.

What is Busboys role in the DC area? What do you view as the role of Busboys and Poets in the community?

In my most hopeful moments, I feel like we can play a role in bridging differences of the people that live here in the city, helping to create a better understanding of people from different backgrounds, of different races, different socioeconomic status. That’s what I see the role of Busboys and Poets [as being]. It does try to create opportunities for people to come together and address some of the concerns and issues that we all have in common, no matter what background we come from, no matter what color we are.

Have there been any events in recent or less recent history that have especially stood out to you as especially interesting?

Well, we do lots of very interesting events here. That’s my favorite part of what we do. All of it is mindful and intentional and deliberate, and it’s very well curated. We do everything from race dialogues — we have one tonight — [to] a film series. We have panel discussions, book authors, poetry, you name it.

‘If there’s one thing that I think this administration and this time has created is for people to understand that democracy does require being in the streets.’

Some things that have stood out for me? Just recently during the inauguration, we had some stellar events. We had lots of great authors. For instance, we had Angela Davis and Melissa Harris-Perry. They both came here to do a conversation, so that was pretty stellar.

We also did the Peace Ball. It’s a ball around the inauguration time, and we did it at the National Museum of African American Culture and History.

Resistance, to me, means constantly being vigilant and mindful about possible changes that are taking place that are taking us backwards on many different fronts, including civil rights. I just feel like there has been so much work that has gone into where we are today. For us to sit back and watch all of that unravel without resisting is foolhardy.

Did you expect the sort of reaction that’s happened in the past months to the Trump administration?

‘I think people [abroad] recognize the difference between Americans and the politics of America.’

I am really delighted at the number of young people that seem to have gotten more activated. If there’s one thing that I think this administration and this time has created is for people to understand that democracy does require being in the streets. It’s not just sitting behind a desk or voting and sleeping for four years, but it really does require one to be active, and engaged, and involved.

Do you travel a lot? Have you noticed a discernible change in the way America and the United States is viewed?

I don’t travel that often. This past summer, I went to Jordan and the Middle East. I think people recognize the difference between Americans and the politics of America. They do have issues, I think, with some of the policies this country has. Many of those issues affect individuals in countries I’ve visited in a very adverse way. So they understand that.

They also think of America as an ideal, and I think because of that they see that ideals are sometimes put on the backburner. At the very at least, America has [ideals] and can actually tap into them, and at certain moments in history we’ve seen that happen. So I think there’s a sense of possibility that America brings to people and I think they really love that and people really believe it.

I think human beings generally want to be hopeful. That’s why we continue to live despite terrible things that happen around us, so I think because of that America has stood for that symbol of that sense of hope. We don’t definitely live up to it as much as we should, but we carry that banner, at least until now.

This interview has been lightly edited for length and clarity.