A Tram Filled with 50,000 Takeaway Coffee Cups Spotted on the Streets of Melbourne

It’s time to ditch the disposable for the reusable. 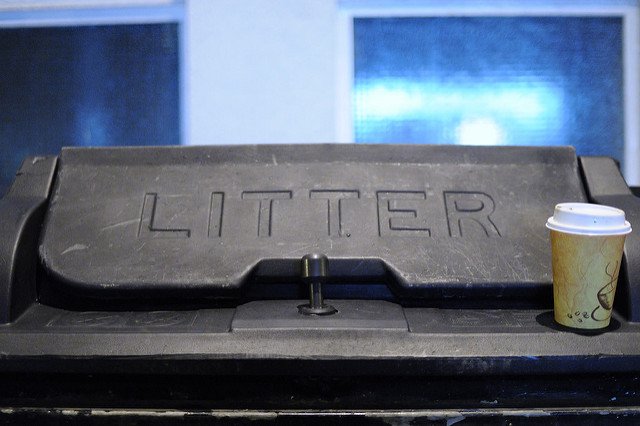 The city of Melbourne, Australia, is know for a few things — its hidden laneways, iconic trams, hipsters, and its love for coffee, to name a few. There was even the well publicised deconstructed coffee incident at a popular cafe — it doesn’t get more Melbourne than that.

And it’s something we can all relate to, many of us can’t start the day without our daily dose of caffeine. But there is a darkside to Australia’s coffee culture. And that’s the waste. An astounding 1 billion take-away cups and lids is estimated to end up littered or in landfill in Australia every year.

In fact, Australians consume an astonishing 50,000 coffees every 30 minutes. To show Aussies what 50,000 takeaway coffee cups looks like, ABC presenter and member of the satirical comedy group The Chaser Craig Reucassel took to the streets of Melbourne. While filming for his new three-part ABC series, "War on Waste," Reucassel took over a tram and filled it with 50,000 disposable cups. The tram travelled through the city as a visual reminder to  people of the waste their coffee habit is producing every day.

If you're using it once and throwing it away it's probably a waste. #BYOCoffeeCup#WarOnWasteAUpic.twitter.com/5GudpsQJZh

Some people assume that they can recycle their take-away cups but the pesky plastic that lines (even the cardboard cups) prevents this. It also means they are not biodegradable.

In an ABC broadcast, reporter Sarah Whyte said, “Coffee cups now make up the second largest contributor to litter in this country behind plastic bottles.”

In another visual stunt, Reucassel created a 6,000 kilo pile of clothes in Martin Place to show Sydney-siders how much fashion waste Austrlian's produce every ten minutes.

This is 6000kg of fashion waste. We generate this every 10 mins in Aus. See it today in Martin Place, Sydney. #WarOnWasteAU is coming soon. pic.twitter.com/mqVIgiaKXV

Tune into the "War on Waste" documentry when it comes out later this year to see how Australians have become so wasteful.

In the meantime, when it comes to your take-away coffee, ditch the disposable and invest in the reusable. If you don’t already have one, grab yourself a reusable cup today. You can simply use a jar, a regular mug or invest in a reusable cup from places such as Keep Cup, or JOCO Cups.

Read More: Half of the Species on Earth Could Go Extinct by 2050, Scientists Say

Some cafes are even starting to give a discount to customers who bring their own reusable cup for their take-away coffee. In fact the Responsible Cafes Program encourages cafes to do this and connects eco-conscious customers with cafes who offer the discount.

Clean Up Australia Day happened over the weekend and many take-away cups were found among the litter. Continue to do your bit and join us in waging a war against waste.