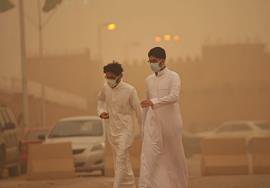 Air pollution is generally thought of as smog curtaining a city and hordes of people wearing face masks. Acid rain pours down, the horizon is obscured, and everything is bleak.

But most air pollution is invisible. Tiny particles are suspended in the air, gradually agitating a person’s lungs, and shaving years off of a life. The vast majority of people living on Earth are breathing unsafe levels of air pollution on a daily basis, according to the World Health Organization.

In many cities air pollution is abrasive. In Delhi, India, for example, it’s hard to walk around without coughing or having your eyes water. In other cities, air pollution is harder to notice.

Throughout the world, 6.5 million deaths each year can be linked to air pollution, making it the fourth-biggest threat to human health after a poor diet, smoking, and high blood pressure. Air pollution is recognized as the world’s worst environmental carcinogen, and it’s considered more dangerous than second-hand smoke.

This report is being called WHO’s most exhaustive analysis of air conditions to date and it shows that the trend of pollution is going in the wrong direction. Dozens of researchers studied 3,000 urban and rural locations and concluded that nine of 10 people are in regular contact with bad air, with the most severe air pollution occurring in Southeast Asia and the Western Pacific Region.

Air pollution is mainly driven by human development — the burning of fossil fuels — but it’s made worse climate change — the drying of ecosystems.

Many other sources contribute to air pollution — using chemicals in agriculture, burning forests to make way for crops, churning up dust on unpaved roads, car tires shedding microscopic bits of rubber, processing metals, processing paper, and so much more.

Read More: Indonesia's fires may be the environmental catastrophe of the 21st century

In India, which has seven of the 15 cities with the worst air pollution, human activity is making the air thick with contaminants. The country is heavily dependent on burning the dirtiest types of coal and on unregulated industrial activity. It also has lax regulation for vehicles and garbage fires along streets are common because waste management programs are often ineffective.

The city with the worst air pollution is Zabol, Iran, partly because wetlands are drying and unleashing dust particles into the air. This drying is driven both by human development — diverting rivers, building over sections of the wetland — and climate change which increases the likelihood of droughts.

In California’s Sacramento County, dust storms provoked by drying wetlands have caused an epidemic of lung diseases and infections.

In most cases, air pollution affects the the poorest populations the most — laborers in Delhi who toil all day in the toxic air, women in Sub-Saharan Africa who tend to indoor cooking stoves that pump out smoke, families in Beijing that can’t afford air purifiers, citizens in Indonesia who can’t flee the forest fires.

Read More: How a Tiny Cookstove Could Save Millions of Lives

Many countries are responding the the hazards of air pollution. In Europe, for example, countries are transitioning to clean energy sources to limit the emissions that enter the air.

In Delhi and Mexico City, restrictions on vehicle use are being imposed to limit pollution.

Some forms of air pollution may be never be escaped, but it’s in every country’s ability to limit how many people die from the air they breathe.