5 Most Powerful Moments of the 2016 Global Citizen Festival 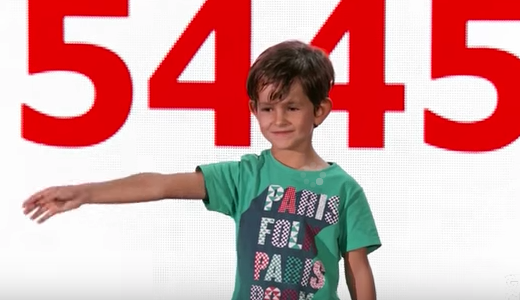 The Global Citizen Festival drew 60,000 fans to Central Park with a larger purpose, and global leaders and luminaries including Michelle Obama, Queen Rania, Nancy Pelosi, Salma Hayek Pinault, and Jada Pinkett Smith all asked Global Citizens at the festival and those watching the concert at home to take specific actions to help end poverty, create more opportunities for girls and women, create a more engaged citizenship around the world, and get emergency help to the millions of refugees in crises around the world.

It was truly world-changing. Check out the top five moments of “real change” from the GCF 2016.

U.S. House Minority Leader Rep. Nancy Pelosi (D-Calif) congratulated Global Citizens on their role in helping to create the United Nations Sustainable Development Goals to help end poverty and hunger, eradicate disease, protect our planet, and empower girls and women to succeed, but she also called on them to act even more boldly going forward.

Learn More: The Closest Elections in US History

“Yours are voices that must be heard, yours is a vote that must be counted. Global Citizens, let us vote, and tonight let us dance,” she said.

Jordan’s Queen Rania has long been a staunch advocate of education, and on Saturday night, she asked Global Citizens to join her in the Education Cannot Wait campaign, pressuring the world’s wealthiest nations to immediately increase educational opportunities for the children caught in the refugee crisis.

“Today I’m proud to announce the first Education Cannot Wait investments will be made in areas of the greatest need, including $42 million to give nearly 1.5 million children in Chad, Syria, and Yemen access to a quality education over the next two years,” she said.

“Let’s put all the willpower here today to work and give every girl and boy a lesson in hope and humanity. Let’s open classroom doors to them wherever they are. It’s time for more leaders to step up, welcome refugees, and help keep children in school and learning. It’s the right thing to do,” she said.

As part of Global Citizen and CHIME FOR CHANGE's campaigning efforts to Level the Law for girls and women worldwide, Salma Hayek Pinault, Co-Founder of CHIME FOR CHANGE, and Jada Pinkett Smith, CHIME FOR CHANGE Advisory Board member, rallied the Global Citizen audience to call for immediate change to women’s inequality in countries around the world. They shared stories of women being barred from seeing doctors without their husband’s approval and for being murdered by their families in so-called “honor killings” for refusing to enter into arranged marriages or making their own decisions. They brought on stage Academy Award-winning filmmaker and director Sharmeen Obaid-Chinoy, a CHIME FOR CHANGE Advisory Board member. Obaid-Chinoy premiered her powerful short film, narrated by Madonna, on Pakistani social media star Qandeel Baloch, who was killed by her brother earlier this year.

“That’s why it’s important for all governments to investigate and record all killings, suicides, and disappearances of women that are taking place, and to ensure that there are laws to punish these killers,” Obaid-Chinoy said. “I think all of us need to to honor the women who have been killed whose names we do not know by calling on all governments to punish all killers of women. The world that we want to leave our girls and our daughters must be much safer than the world we have inherited.”

2. Michelle Obama Asks Global Citizens to Join International Day of the Girl and to #LetGirlsLearn

The First Lady sent a special video message to this year’s Global Citizen Festival, saying that last year, she asked everyone at the 2015 festival to join her in raising awareness about the issue of schooling for the 60 million girls worldwide who are not enrolled in school.

“This year I’m asking you to take the next step and actually take action to help these girls learn,” she told the Global Citizens this year.

Obama asked everyone to go to LetGirlsLearn.gov to find actions they could take to support educational opportunities for girls, and then to share their actions on social media ahead of the International Day of the Girl on Oct. 11, when the White House will host a livestream conversation with girls around the world.

In what may have been the evening’s most powerful moment, two extraordinary refugee women — Syrian refugee Sarah Mardani, who pushed a boat of 20 refugees to shore while swimming, and Sudanese model Alek Wek — told their stories on stage alongside Brendan Cox, the widower of the British Member of Parliament and refugee advocate Jo Cox who was assassinated in June.

The three appeared on stage to tell their stories and call on the world to do more for refugees, as US Ambassador to the United Nations Samantha Power said that governments and citizens both need to do more to ensure that refugees are accepted into countries around the world and given opportunities. She also introduced 6-year-old Alex, an American boy who asked President Obama to bring a Syrian refugee boy to his home to live, and whose letter has helped “compassion go viral,” as Power put it.