We’re sick of hearing the gender pay gap is a myth.

Today, women earn an average of 23% less than male counterparts in the same position, with the same experience globally according to UN Women. For women of color, the numbers are even more grim. This has consequences on gender equality, and poverty.

In support of equal pay for women, soccer teams are boycotting championships, women are talking about how they found out they were being paid less, and US states, like New York, are considering bills making it illegal to ask for salary history. This is all progress toward closing the gap in earnings that affect gender equality.

Read More: Women Across Europe Are Walking Out of Work Early to Demand Equal Pay

Yet a range of misogynistic legislation, like legal child marriage, unequal education opportunities, and little rebuke for gender-based violence, still pervades policy in 90% of countries.

World leaders, from the US to Bangladesh, continue to add to gender-bias policy. For instance, on March 27, US President Trump revoked the 2014 Fair Pay and Safe Workplaces Order, stripping women of protective measures in the workplace like paycheck transparency and arbitration on matters of sexual assault and discrimination. The world needs policy to support equality — which is why we bring you 10 reasons women still need equal pay.

1. The Gender Pay Gap Is NOT a Myth

For every dollar men earn, women are paid 79.6 cents in the US. Contrary to the multitude of tweets suggesting the pay gap is a fabricated lie, it’s real.

While some attribute the pay gap to women choosing flexible hours, engaging in more part-time work, leaving to care for children, or taking on other caregiving responsibilities, other studies show gender bias in hiring and salary still exist. For example, the US Census Data in 2009 found that when more women entered a profession, average salary decreased.

Most important, however, are the consequences of unequal pay. They cannot be ignored, and must be changed.

#20PercentCounts
And did u know that Black women are actually paid 37% less & Latina women are paid 46% less than white men?! #EqualPayDaypic.twitter.com/nOfN2GORiF

The gap is even larger for women of color: black women make 60% of what white men earn; Native American women earn 59%, and Hispanic women earn 55% of what white males make in a year. At this rate, it will take Latina Women 231 years to receive equal pay.

Women are still paid less than men-- even in the same roles, occupations, industries.#EqualPayDay@LeanInOrg: https://t.co/fAoCqcA5Unpic.twitter.com/oT6Vof3T9j

Over 145 countries have documented a gender pay gap according to the World Economic Forum. Its 2015 study addresses an important issue; what amounts to pay difference later in life can, in some cases, start early in life with differences in access to education, political power, and job opportunity.

Poverty drops by 50% in 28 states when women are paid equal to men https://t.co/SoQDuUelZ2#EqualPayDay#PowerOfParitypic.twitter.com/siVLeFexgC

Eliminating the gender wage gap can add between $12 trillion and $28 trillion to global GDP by 2025. This is a serious incentive to equalize pay between men and women. Another report shows that poverty could drop by 50% in the US if the gender pay gap were to close.

5. Because Only 4 of 120 Jobs Pay Women Higher Salaries

Salaries should be equal regardless of gender, but to have 107 sectors of the workforce pay men more is ridiculous. Women’s Policy Research shared this insight in a new report released today.

Today is #EqualPayDay, a reminder that even in low-wage work, the #PayGap hurts women every day. #FightFor15pic.twitter.com/JEvKPu1syd

The gender pay gap exists across nearly all jobs, but for women in low-income positions the gap has more dire effects on savings and benefits.

7. There is Literally a Chatbot to Help You Ask for a Raise 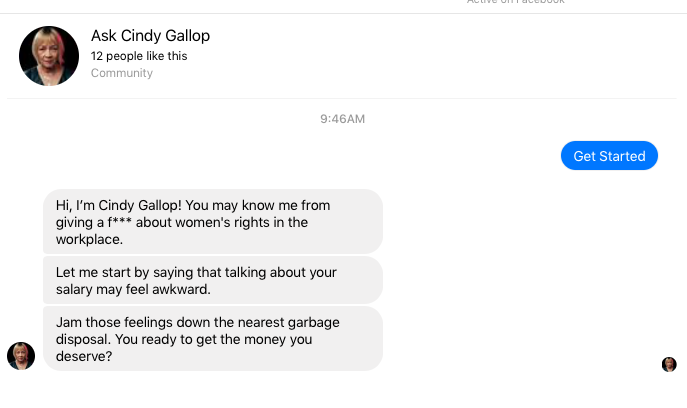 A new campaign, Ask For a Raise, created a chatbot to, well, help you ask for a raise. It’s sassy, bossy, and empowering. The campaign features badass businesswoman Cindy Gallop. To try it out send @AskCindyGallop a message via Facebook and start negotiating equal pay today.

8. Women Should Not Have to Choose Between Caregiving and Pay

Mothers shouldn't be punished -- should be compensated for balancing motherhood &work. https://t.co/pNeW7rvs5Z#stoptherobbery#EqualPayDaypic.twitter.com/5j28KRu0j7

Caregiving and having children should carry equal responsibility between genders, yet women still take on the bulk of these duties globally. In addition to taking time off for caregiving, the gender pay gap continues to discriminate when women return to work. Women earn a third less after childbirth, while men earn 6% more after having kids.

Globally, the wage gap is larger for women with children. In sub-Saharan African and South Asia, women earn over 30% less than men once they have children. This is double the gender wage gap of single women in these regions.

9. Women Are 80% More Likely to Be Poor in Retirement

As men and women grow older, the wage gap grows wider. A study from the National Institute of Retirement Security in the US found that the wage gap grew to 44% by age 80 for women, and that women age 75-79 are three times more likely to fall below the poverty line than men.

Adding alarm to this finding, is the fact that women also live longer than men.

10. Finally, Because There Are Still Infuriating Tweets Like These:

Happy #EqualPayDay -friendly reminder that there are laws in place that make it illegal to pay women less then men. the wage gap is a myth😀

No company would pay a man $1 when it could pay a woman $.77 to do the SAME job. The #EqualPayDay myth compares wages from DIFFERENT jobs

If businesses could pay women 23% less for the same job, wouldn't they only hire women? Stop perpetuating the wage gap myth. #EqualPayDay

Every day is #EqualPayDay because the gender wage gap is a myth, & if you believe the myth, you've been trained to harbor a victim mentality