Americans Are Smoking Less, But the Poorest People Still Suffer from Addiction

480,000 Americans die from smoking each year. Three-quarters of them live in poverty.

Smoking rates in the United States have been on the decline for decades, largely thanks to the the implementation of tobacco-control policies and greater educational awareness about the dangers of cigarettes.

However, it still remains the leading cause of preventable death in the nation — especially for one group of Americans: the poor.

When it comes to smoking, massive disparities remain for the poorest and most vulnerable Americans, according to the American Lung Association (ALA) 16th annual State of Tobacco Control report, an analysis of state and federal policies designed to boost health outcomes by encouraging people to use fewer tobacco products.

The report found that while the implementation of many of these policies meant Americans in general were smoking at historically-low levels, that wasn't true for poor Americans.

The ALA lists Americans making less than $20,000 a year as the fifth-most vulnerable population to smoking-related health disparities, smoking at a rate of nearly twice that of the general population

Nearly three-fourths of all smokers in the US live in low-income communities. Poor Americans suffer from more smoking-related diseases than other smokers, and are typically diagnosed with these ailments much later than their wealthier counterparts. Researchers have even estimated that smoking is largely responsible for the 10- to 15-year gap in life expectancy between the wealthiest and poorest Americans.

Of course, the relationship between smoking and poverty isn't causal — that is, poverty alone doesn't cause any individual to take up smoking. Instead there is a complex web of reasons why low-income Americans are more likely to use cigarettes, including resource inequity, systemic toxic environments, and corporate exploitation, relationships that show not just how poverty affects smoking, but how poverty affects life and reality for the living poor in the richest nation on earth. 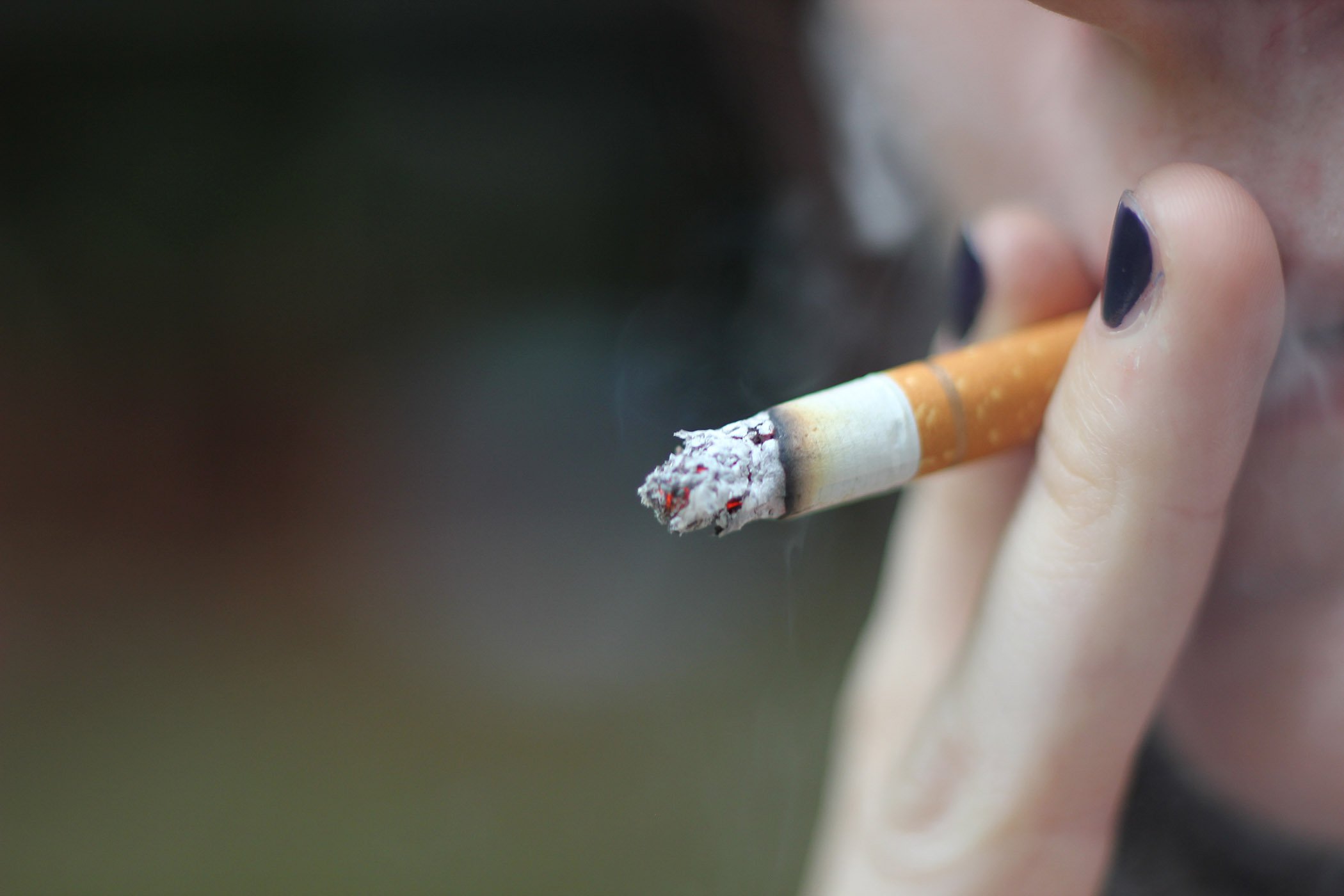 For Americans rich and poor, the likelihood of smoking cigarettes has a lot to do with their immediate surroundings.

It just so happens to be that for poor Americans this environment often tends to be more smoking-friendly than not.

“It’s very largely a matter of the ecology the individual finds themselves within,” Dr. Lynn Kozlowski, a former Dean of the School of Public Health and Health Professions at the University of Buffalo, told Global Citizen. “It’s not that tobacco control tools don’t work on everybody, it’s that some people are much less likely to be feeling the effect of those tools based on where they live and where they work.”

Read More: US Income Inequality Is So Bad That Now the UN Is Taking Action

For example, Kozlowski noted that smoke-free laws are far less likely to be found among the blue collar jobs many low-income Americans hold. Working outside, or in a factory where smoking is not prohibited, provides more opportunities to be around smokers, or to smoke yourself.

One 2017 study found that low-income communities were also significantly less likely to have these smoking bans in public spaces such as parks and playgrounds. Similarly, smoking is also rampant among residents of public housing, where indoor and outdoor smoking has yet to be banned. The ALA listed this group as the single most disproportionately vulnerable group to smoking-related disparities.

On top of this, cigarettes are often more widely available in low-income areas across the country, where there are denser concentrations of tobacco retailers than in richer areas.

All of these things contribute to the normalization of smoking within poorer communities, which Kozlowski stressed can make it difficult for an individual to abstain from cigarettes, and to quit them.

“The social pressure that arises when you see people around you still smoking is a powerful driver,” he said. “That’s part of what about what’s hard about the environment of the [low-income] smoker, because they’re likely to have other smokers in their group.”

Read More: The Tax Bill Will Make Inequality Far Worse in the US, UN Expert Says

Normalization of smoking among lower-income Americans is all the more deadly because this group traditionally suffers from disproportionate levels of stress. Behavioral neurologists have suggested that the calming effects of nicotine may be especially enticing for poor Americans who often suffer from higher-than-average stress levels as a result of their financial instability. Wanting for food, proper housing, healthcare, and other basic needs lead to the kind of day-to-day stress from which cigarettes can offer a temporary relief.

Kozlowski told Global Citizen that smoking cigarettes is often far from the most pressing problem in a poor American’s life.

“When individuals have multiple things going wrong with them, it can be hard to pick, ‘What do I work on?’” Kozlowski said. “It may make you want to stick with your cigarettes as a perceived stress reliever for you while you’re dealing with other problems.”

The fact that low-income Americans smoke and suffer from related diseases in higher numbers can also be attributed in part to the vast disparities in access to health services and educational attainment gaps between the rich and the poor.

Much has been written about the pernicious links between education and generational poverty. It’s widely known that income and education are closely related, and that children in low-income families are less likely to achieve higher educational attainment themselves.

But a troubling addition to this cycle is that educational attainment is also closely related to smoking habits. The ALA listed Americans without a high school diploma as the sixth-most disproportionately vulnerable group in their 2018 report.

Read More: Russia Wants to Fully Ban Cigarettes for Anyone Born After 2015

Thomas Carr, the primary author of the report, told Global Citizen that poverty, education, and smoking had clear connections.

“There’s a lot of overlap,” he said. “Unfortunately, these are all deep-seeded disparities.”

The ALA report stated that adults without a high school diploma smoked at a rate of 26.1%, compared to the general population’s rate of 14.9%. Another by analysis by the New York Times found that while Americans with a high school education or less made up only 40% of the US population, they were 55% of all American smokers.

Kozlowski emphasized that this trend likely had to do with the types of employment options open to those lacking college degrees.

“If you think about it, where are [poorer Americans] most likely to work?” he said. “In an office building, where they can’t smoke? Or are they more likely to be working in a factory, or outside? If you’re cutting lawns for a living, you’re not working in a smoke-free work space.”

Low-income Americans are also less likely to have insurance, and uninsured Americans smoke at a higher rate than Americans with private insurance, again increasing the risks for someone living in poverty.

Without regular access to doctors or tobacco-cessation medical support, poor Americans are less likely to attempt quitting, and less successful when they try, the study found, despite the fact that low-income Americans report desiring to quit in just as great of numbers as any other socioeconomic group.

On top of all of this, lack of access to regular medical examinations often means lower-income smokers in America are likely to be diagnosed with smoking related diseases much later than their wealthier counterparts.

The psychological burden of these discrepancies can quickly add up for Americans living in poverty.

In a whirlpool of factors relating to gaps in educational attainment and lack of access to healthcare, poor Americans are far more likely to be smokers, yet far less likely to be able to seek treatment for their addiction or the disease that addiction will inevitably cause.

Tobacco companies have continued to market to lower-income groups in recent decades, as well, including giving away cigarettes to children in public housing and distributing coupons attached to food stamps.

Read More: How the Ugliest Color in the World Might Save Lives

But the kind of marketing tobacco companies employ today to ensnare new smokers looks much different, and can be harder to spot. Studies have found that point of sale advertising, including price discounts, coupons, and storefront advertising are particularly effective at recruiting and retaining low-income customers.

Internal corporate documents obtained by the ALA revealed “decades of sophisticated, well-financed, [and] scientifically-based efforts to target the most vulnerable,” Carr said.

Public health researchers note retail shops in low-income neighborhoods have higher levels of storefront advertising and price promotion for tobacco products than in other neighborhoods. Tobacco shops offering cheaper cigarettes and “buy-one, get-one” deals are also more highly concentrated in these communities, according to the Center for Public Health and Tobacco Policy at the New England Law School.

Keeping cigarettes cheap is one of the most effective ways tobacco companies maintain their customer base. Researchers claimed that increasing the price of a pack of cigarettes (via taxes) by just $0.71 to $4.63 could lead to consumption reduction of up to 46%.

To continue selling products to Americans, tobacco companies spend billions of dollars each year to keep prices for their products as low as possible. In 2014, tobacco companies spent a whopping $6.8 billion on discount price promotions, accounting for a full 80% of their market spending, according to a report from the Federal Trade Commission.

What Can Be Done

Eliminating these pernicious health disparities is a complicated task that could include short-term solutions, like raising taxes and the purchasing age on tobacco products, creating more smoke-free spaces, and eliminating targeted advertising.

There is also evidence that national and state-specific anti-smoking ads are effective at lowering smoking rates.

Some educational campaigns, like those carried out by the Truth Initiative, are tailored toward exposing the ways tobacco companies market to vulnerable populations.

“What we’re obviously hoping to do with….our campaigns is…. help people to realize that smoking isn’t just a public health issue, it’s really a social issue,” Robin Koval, CEO of the Truth Initiative, told Global Citizen. “We like to say it’s one about equality and fairness and not just public health.”

More than 45 million Americans are living in poverty, according to recent census data. That means that almost 15% of the entire population lives with a significantly increased chance of smoking, and developing deadly diseases.

As the majority of the country continues to stub out their cigarettes, it’s important to remember that it may be more difficult for some than others.

Global Citizen campaigns on the United Nations’ Global Goals. These goals include eliminating poverty around the globe, as well as ensuring all people receive access to adequate healthcare, and educational opportunities no matter their income level. Given the interconnectedness of poverty, healthcare, and education, it is more important now than ever to work to achieve these goals.

You can join us by taking action on these issues here.