Hugo Guerrero tells Global Citizen about his coffee farm in Peru, and the challenges he faces.

Why Global Citizens Should Care
The United Nations Global Goal 2 aims to eradicate hunger by 2030, and Global Goal 12 calls for societies to work towards responsible consumption and the production of goods. This farm, which uses organic and environmentally beneficial techniques, is an example of responsible production but it is threatened by climate change. To find out more about resilient, sustainable food production and take action to promote it, join us here.

Hugo Guerrero, 34, is a coffee producer in the Piura region of Peru. He comes from a long line of farmers — his grandfather cultivated coffee in the same area decades ago and his father, who is 73, started work on the farm at just 12 years old.

After a stint studying agriculture in the capital Lima, Guerrero returned to the family business, introducing more sustainable, organic farming techniques he had learned at college. The family operates as part of a cooperative and they sell produce via a Fairtrade contract, something that he says has massively improved their living standards and the quality of their product.

A Fairtrade contract means growers get a minimum price for their product. When that is taken away, it can have a huge financial impact. For example farmers in West Africa earn on average 74p per day and when Nestlé pulled Fairtrade from its KitKat brand in June, it was estimated that £2 million would be lost in premiums for cocoa and sugar farmers every year.

To mark World Food Day, Guerrero told Global Citizen more about his work, the challenges farmers in Peru face because of climate change, and his hopes for building a sustainable food business that benefits biodiversity, health, and the planet.

Tell me about your farm, how does it work, what do you sell?

I focus on coffee production, but organic coffee. I wanted to focus on organic because we know that the use of agrochemicals in regular production affects people’s health and the environment.

But I don’t only produce coffee. I also have bananas, citrus, avocados, and beans on the farm as it’s not possible to rely on coffee alone. I always try to have diversity in what I sell because it means there’s greater biological biodiversity too — it’s better for wildlife. That’s something that we lose out on a lot when we grow monocultures [a type of farming that produces only one crop].

We’ve sold organic products since 1995 when my father co-founded the Norandino cooperative [which is a way for farmers to work together to improve pricing conditions], and they began working with Fairtrade.

How did being in the cooperative and working with Fairtrade change things?

It was a bit of a culture shock at first for some of the producers who joined, because the market demanded high quality. But I think they understood that it was a good change for them.

The Fairtrade system has helped to improve the socio-economic level of families in this community a lot. In 1995, when the cooperative began, many families did not know where to sell their products. That meant a local intermediary facilitating the sale paid them whatever price they wanted to pay, rather than a fair value.

Fairtrade, as the name implies, is a fair price for the product. It is a minimum price, plus an incentive. It’s clear today that it has improved living conditions and farmers have been able to reinvest profit back into their farms too.

Within the Norandino cooperative there is even training available on things like gender equity, for example. For a long time, women were expected to be in the home, so this system has improved things a lot in that way too.

You mentioned chemicals, can you say more about how to run a farm in an environmentally-friendly way?

Yes, if you have more diversity that means more trees and the soil is better protected, you’ll get more diversity of plants too. That way you avoid the evaporation of water — you generate microclimates in the cultivation field, and you always maintain good coverage in the ground.

I innovate new ways to fertilise the crops by making biofertilisers with cow excrement, with rock flour, ground rocks, and bones due to the phosphorus and calcium content they have. I mix it with plant extract and seawater, which brings with it microorganisms that are helpful.

There are alternatives that we have in our environment that can be used instead of chemicals, but unfortunately most producers do not know these techniques, and the government is not focused on researching them. 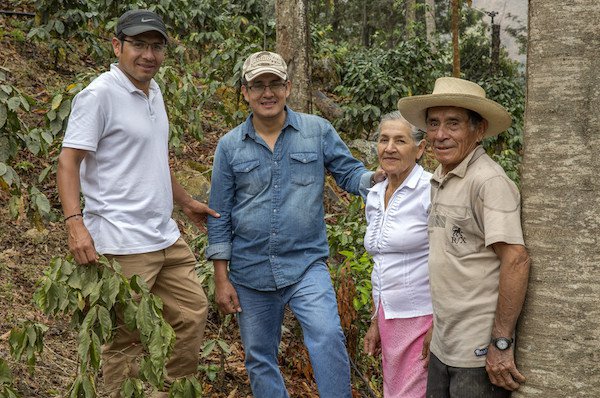 Has your work been affected by climate change?

Yes, personally in terms of challenges we’ve seen a high incidence of pests and diseases in recent times. In 2011 and 2012, we had a problem with the roya maria plague that devastated our crops. Many producers were not prepared for this type of illness. Some even decided to change to a different crop and stopped making coffee altogether.

Another issue is that there are areas of Peru where there is no access to water through pipes — there is only access to rain water. So that means if it doesn't rain when it should because of the climate, there are too many dry periods, and it drastically affects production and cultivation.

These kinds of challenges are another reason Fairtrade is helpful, because getting a fair price means producers can be innovative. We have to keep improving, as we have a series of climate-related problems, and pests, which mean producers need to be able to strategise and come up with solutions.

Another important resource that we have is the CLAC (Coordinadora Latinoamericana y del Caribe de Pequeños Productores y Trabajadores de Comercio Justo). There, we receive training on climate change issues too.

Has COVID-19 affected your business?

We weren’t impacted by COVID-19 on the farm itself. But it has affected us because the prices have risen. The shipping costs have increased and everything has become a problem because people’s purchasing power has decreased too as a result of what’s happening.

In response, I’ve promoted the use of local coffee. I roast my own coffee and try to market it within the local market.

What are your thoughts about the future of coffee production?

One of the most important issues is getting young people involved because the average of age of producers is 60 years. Young people do not see agriculture as attractive. I believe that the organisations that are involved in this work should generate projects that encourage young people who do not migrate to the cities to get involved with agriculture.

With the coronavirus pandemic, many young people have returned to the countryside, but we must be careful because many of those who return are going to practice agriculture in a way that is easier and quicker — through the use of chemicals, burning, deforestation, and so on — because they’ll want to make money. But the institutions involved in caring for the environment have to try to prevent this.

You’re so passionate about your product. What do you want other people to know about coffee?

I would say that the beautiful packaging is not the only thing that matters. The cultivation must be organic, nutritional, and healthy. It is important for the consumer to understand why it is vital to consume something good — the price difference is because organic coffee is more nutritious. Non-organic coffee is the discard of coffee and that is why it’s cheaper. It’s useful for people to have the experience of seeing how it’s cultivated and produced too.

I am passionate about it because I have a good feeling that I know that I’m doing something good, that people like, and is good for the environment. That’s why I’ll keep doing it.