This Critical Tool Is Helping Girls Across Africa Go to School

Girls are excelling in school in rural Africa thanks to bicycles. 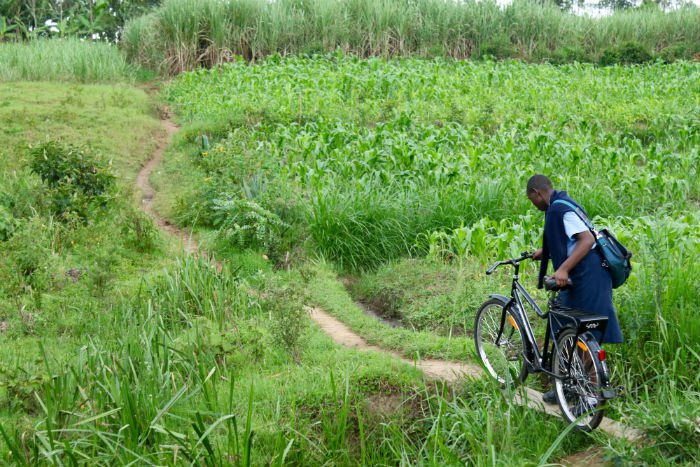 This article was contributed by World Bicycle Relief.

Around the world, 29 million girls do not attend secondary school. In rural Africa, distance, early marriage, and gender inequity stand between these girls and their futures. But World Bicycle Relief found a way to help girl students overcome education barriers: bicycles.

World Bicycle Relief designs and delivers Buffalo bicycles, sturdy reliable transportation for students, healthcare workers, and entrepreneurs in developing countries. Since its founding in  2005, World Bicycle Relief has seen the enormous impact that bicycles can make in helping students access education. With bicycles, students arrive to school on time, safely and with energy to learn.

In Zambia, the Ministry of Education identified safe, reliable transportation as a way to immediately increase school enrollment. To help the government take this knowledge and turn it into action, World Bicycle Relief partnered with the Zambian Ministry of Education to create the Bicycles for Educational Empowerment Program (BEEP). One important component of BEEP is that it targets 70% of bicycles for girl students. Through BEEP, school attendance rose by 28%, and students’ academic performance increased by 59%.

The Lwanda Secondary School in rural Kakamega, Kenya, received bicycles just two years ago and has already seen the positive change for their students. For the first time this year, all girls were present for the final exams; not one was absent due to a pregnancy. With access to bicycles, many more girls are staying in school and making brighter futures for themselves. The dramatic impact the bicycles are making are best told through the personal stories of those girls.

Here are the stories of three high school girls in rural regions of Africa who have benefited from bicycles designed with them in mind.

Dr. Edward Jenner, who discovered the vaccine for polio, is not many young girls’ role model. But Angela is not most girls. She is a 15-year-old Kenyan student who is studying to become a doctor.

But she wasn’t always on the path she is today. Before she received a bicycle from World Bicycle Relief, she faced threats of sexual assault from drivers on her way to school; motorcyclists will often trade sexual favors for rides to school. At that time, her education and future was uncertain. In 2015, Angela received a bicycle and everything changed. Now she is firmly on the academic road to becoming a doctor and is at the top of her class.

Ethel is a high school student in Zambia with the dream of becoming a nurse. Before receiving a bicycle from World Bicycle Relief, she spent two hours walking to school after performing hours of morning chores. She often arrived late and tired, and had to take a nap during class. She rarely had time to study and her academics suffered. After receiving a bicycle from World Bicycle Relief, she cut her commute time by 75%. This, in turn, allowed her to arrive to school on time, with energy to learn. Ethel is now on her way to becoming a nurse and giving back to her community.

Education For All from World Bicycle Relief on Vimeo.

Dianah, 18, is a student in Kenya, with the goal of becoming a college professor. Dianah’s mother and teachers believe in her future, but worried about the challenges Dianah faced.

Dianah’s mother remembers how Dianah was often late to school because she was forced to walk, even though she left very early in the morning. Dianah was tired at school, making it difficult to concentrate. Dianah's mother also worried about her safety; many girls face the threat of sexual assault on the way to school.

“As a mother, I was fearing for Dianah so much. And I would feel that she might not even finish her education because of the risks facing her on the way. I was very worried,” said Rofina, Dianah’s mother. “I was very happy and prayed to God that my daughter would be one of the students who would receive the bicycle when I heard of the bicycles. I was ready at any cost to get the bicycle for my daughter. Now that she has the bicycle, I have never worried about Dianah’s going and coming back from school.”