Trump to Inherit a Strategy to End Global Hunger, Thanks to 120,000 Actions Taken by Global Citizens

Imagine if overnight, the entire senior leadership team of where you work was replaced with a new set of staff. Quite an upheaval right? This new staff would undoubtedly require a fair amount of briefings, discussions, and wrangling while the new people come to terms  with the task ahead.

Well, this is effectively what happens every time a new president moves into the White House. Which is why it is so important that the Global Food Security Act has not only passed in US Congress but its strategy has been delivered in time for the new administration.

The nearly 800 million people who suffer from chronic hunger all over the world do not have time to wait for the government to reshuffle, and thanks to the actions of 120,000 Global Citizens, now we know for sure that they won’t have to.

Today @POTUS signed the Global Food Security Act. Here’s what he said about it: https://t.co/sXttETXoZo#FoodSecurity#GlobalDevelopment

In July of last year, the US Congress took a historic step and passed the Global Food Security Act (GFSA) with overwhelming bipartisan support. Sen. Johnny Isaskson (R-Ga.), referred to the GFSA as “win-win legislation for the United States and for the world.” The act codified and strengthened the Feed the Future initiative — the US’s global hunger and food security initiative.

Then before the end of 2016, Feed the Future delivered a comprehensive plan of implementation in under three months to ensure that a whole-government approach was taken toward combating hunger and malnutrition globally and that it was ready for the new government to run with in 2017.

In other words, the US’s key game-changing initiative to help end malnutrition and hunger by 2030 is fully on course and is set to become even stronger from January 20th and beyond.

So how did this all actually happen?

Back in 2014, Global Citizen joined forces with a coalition of NGOs who were working to get the Act passed, that included CARE, ONE, Caterpillar Foundation, Oxfam, World Vision, InterAction, Bread for the World, Farm Journal Foundation, and Save the Children.

For the past two years, Global Citizen led the coalition on public and media mobilization to help mount the public pressure required to get the act through Congress, taking more than 120,000 actions helping to secure congressional support. People did things like writing thousands of letters to their congressperson urging them to support legislation back in 2014, which helped introduce the bill to the House of Representatives. They made over 34,000 phone calls to their local reps in June 2015 asking them to support the GFSA. Global Citizen also coordinated meetings on Capitol Hill with partners like CARE and ONE, hosted events for public figures to show their support of the bill, and helped get media coverage. All of these moments were critical in securing the passage of the GFSA into law. 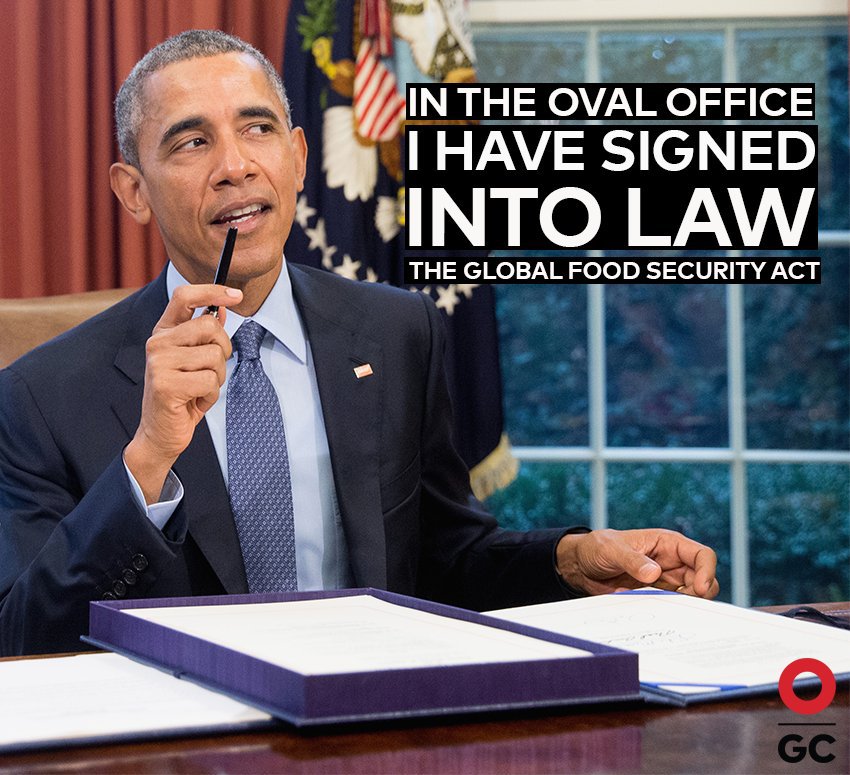 Yet it definitely was not all plain sailing. The House and the Senate each passed versions of the Global Food Security Act but, as the versions were not identical, the Senate version needed to come to a vote in the House for the bill to be signed into law.

These stumbling blocks meant the time that USAID and the State Department had to deliver the strategy was drastically truncated, leaving many concerned that they would not be able to implement it in time for the mandated date, and even in time for the new administration. Yet in two and half months, while collaborating with 11 different federal agencies, they produced a 113-page document, dense with strategy on how to fix one of the world’s biggest problems. This was no small feat.

And one that the dedicated cohort of NGOs working on the GFSA congratulated Feed the Future on formally in a letter.

Why, then, is this is so exciting?

So far the initiative has helped nearly 7 million smallholder farmers and producers to improve their crop yields and has reached 12.5 million children with nutrition programs. Incredible results have been seen in countries like Rwanda, Senegal, and Malawi. With the new Global Food Security strategy in place, this impact will only increase,all at no additional cost to the taxpayer.

Extreme poverty has dropped between 7% & 36% in many of the areas where #FeedtheFuture works: https://t.co/VSa7HXGLRz#YesWeCanpic.twitter.com/50DwGrK59s

The Global Food Security Strategy will achieve this greater impact through a number of critical ways:

— For example, by ensuring focus on the nutritional outcomes for women and children, particularly in the vital first 1,000 days between a woman’s pregnancy and her child’s second birthday.

— Strong reporting, oversight and accountability measures have been put into place. These measures have been carefully selected to give the most accurate picture of progress — such as looking beyond simply calorie intake to actual nutritional value of food intake. It goes even further than that to consider nutrition sensitive factors such as hygiene.

— Women will also form a critical part of the new data that will be taken into account, to check that the impact is felt among the most marginalized people.

— And to make sure that unforeseen future events, whether political, environmental or social, cannot knock us off course to ending global hunger by 2030, resilience has been elevated to a full objective of the program.

What does this really look like for the people affected though?

Our team joined with World Vision to host a congressional learning trip to Senegal last summer. As part of the trip, we had the privilege to see firsthand what the impact of this work means on the ground for women like Madame Khady Ndour who is surrounded in this picture below by members of the group, her children and 16 of her grandchildren!

Through training Mme. Ndour received from the behavior change communications program, SPRING, funded by Feed the Future, she transformed the value that her chicken flock provided to her family, while also reducing the risk it posed to their health.

As Mme. Ndour explained to us, doing things such as changing the type of chickens that she housed to a more avid egg laying breed, meant that even after their sizable family had eaten enough, there were plenty more to sell on the market. The eldest grandson then received guidance on how to market the eggs.

Mme. Ndour was carefully selected as a spokesperson to receive the training due to her prominent role within her community in Koungheul — as a member of the local agriculture co-op and president of the Community Board of Women in Livestock, Mme. Ndour is using her sphere of influence to help others learn what she has. This truly is development assistance — helping people to help themselves.

#FeedtheFuture is helping boost #nutrition around the world by empowering communities: https://t.co/ADwCVQ5Y3dpic.twitter.com/0y5DOR2kX3

This is just one inspiring story among millions that could come from Feed the Future in the coming years.

“The legislation before us is the product of more than three years of careful deliberation and inclusive negotiations. The Foreign Affairs Committee has held multiple hearings on food security. We marked and reported not one, but two earlier versions, H.R. 5656 and H.R. 1567.  The House passed each of those bills with broad bipartisan support.”

Thank you Global Citizens, for not giving up on this hard fought battle. All your efforts are bringing us closer to the day when no child goes hungry.