Nepali youth are raising their voices, but not in the way you'd expect

"In sharing our stories, we find connections with people... We find that we're not alone."

My love affair with poetic writing began with a sheet of Animal Mad Libs, which combined my affinity for furry critters and words that rhymed.

Since then, my passion for poetry has less to do with pets and more to do with self-expression. In the past few years, I've taken up Spoken Word poetry, which is a hobby that's become a significant part of my life.

What is Spoken Word?

You'll probably recognize it when you hear it. It's performance-based poetry (poetry written to be spoken out loud) that tends to include a lot of wordplay and metaphor, and ends up sounding like a mixture of poetry, rap, and speech.

That was Sarah Kay, one of my favorite poets. I read in an interview describing how she fuelled the Spoken Word poetry movement in Nepal by leading a workshop with the Word Warriors.

I had no idea that Spoken Word had such global reach; so I contacted the Word Warriors and Ujjwala Maharjan, a WW coordinator, agreed to speak with me about Spoken Word in Nepal.

Yuanyuan Kelly: Can you give a brief intro on who you are and what the Word Warriors are all about?

Ujjwala Maharjan: Word Warriors is a Spoken Word poetry group based in Kathmandu. It was formed after the QC Awards 2010: Voice Your Words, which was the first ever spoken word workshop and slam competition in Nepal. We're a collective of young Spoken Word poetry enthusiasts that has grown ever since. Now, the members don't just perform, but some also teach Spoken Word poetry. The WW are also doing a few poetry projects that help them take spoken word outside the country capital. As for me, I'm one of the founding members and project coordinators for Word Warriors, currently focused on a project called Write to Speak*.

*A campaign to “introduce poetry to young members from diverse communities in five urban centers in Nepal. As part of this campaign, the Word Warriors hope to build public platform that give voice to those who have been traditionally suppressed. With a special focus on young women and marginalized communities in Nepal.”

YYK: How’d you get involved with the Word Warriors?

UM: After the competition, I realized this was something I wanted to continue and so a few of us participants decided we'd start a group solely dedicated to Spoken Word. We haven’t looked back since.

YYK: What is the impact the community has had on the people who’re a part of it and the greater effect it has on Kathmandu?

UM: I can’t speak for everyone, but I've found friends through Spoken Word that I feel the most connected with. I can meet people as poetry-struck as I am and share the love of words. I'm a person who feels like I have no opinions or a strong stand on anything, but on stage I find myself talking about things and it is like I find my voice there. I think that has happened to other people too. It has provided many people here a form of artistic release.

In terms of the effect on Kathmandu, I think the art form is definitely picking up. Though it's still a niche group, the way people look at poetry has changed: From a "hard to understand/elite/not for me" art form to more accessible, "open to exploring and experimenting" form.

YYK: What’s been challenging about organizing Spoken Word events in Nepal? How have people received the concept on what you guys are trying to do?

UM: We haven’t done many big events. With the smaller poetry events that we do, we've always found good partners (schools and other art collectives) over the years who are excited about promoting the art form. 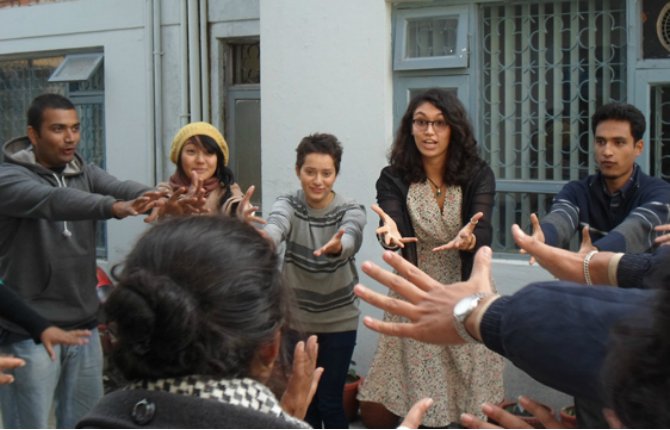 The biggest event we did was when Sarah Kay was here where we had more than 600 people in the audience, but if we were to do big poetry events without international attractions like Sarah Kay it would be a low key event and to find sponsors for a literary event would be hard.

Generally speaking, Spoken Word has been received quite well but it is not without opposition. Besides audiences who attend our events, most people we deal with are educators or schools. While some schools have taken to Spoken Word very positively as a great tool for creative expression, some (we’ve only encountered few) think of this as attacking traditional poetry forms.

YYK: Why do you write poetry and are there any particular themes in your poetry?

UM: I've always loved working with words and sometimes it turned to poetry. Writing also has been a form of release for me, and hence a lot of my poems are fuelled by anger.

I don't have particular themes, but I've been told I have a lot of feminist poems. I guess that comes from being a female who is very affected by anything that keeps reminding me, "I'm a female and hence my life is conditioned a certain way."

YYK: What language do you prefer to perform in?

UM: I’ve performed in Nepali and English. As long as I am happy with what I’ve written, I would perform in any language. But I would say I’m a bit more self-conscious when performing in Nepali, as it is not my mother tongue. I speak Newari, one of the many local languages spoken in Nepal, and many Newari speakers tend to have a certain accent when they speak Nepali.

YYK: Which piece are you proudest of?

UM: The last poem I was happy with was “Roti”, which is in Nepali. It's about me trying to make the perfect roti bread for my perfectionist grandfather.

UM: It gives people a voice--or it allows us to acknowledge our own stories and thoughts as important. It gives us a sense of self-affirmation for our lives - joys, pain, shame, struggles - and things we have to say. In sharing our stories, we find connections with people who share similar stories. We find that we're not alone.

Thank you for your time, Ujjwala! I'm excited to see Spoken Word becoming a global platform for discussions on social and political issues, personal expression and youth empowerment.