My boobs can do what?!

Women who have never given birth, and those well past menopause, can still produce breast milk.

I’ve always known the female body could do pretty amazing things, afterall, we are able to carry life. But I recently came across a Facebook post from Nicholas Kristof that had me dropping my jaw and exclaiming, “My boobs can do what?!”

On a recent trip to Angola, Kristof visited a hospital in the southern part of the country. There he encountered an aunt who was breastfeeding a malnourished baby boy. His mother had died in childbirth, and now he was reliant on his aunt to survive. Unfortunately, this situation is not uncommon, but what was unusual was that the aunt was able to produce the milk to feed the baby. 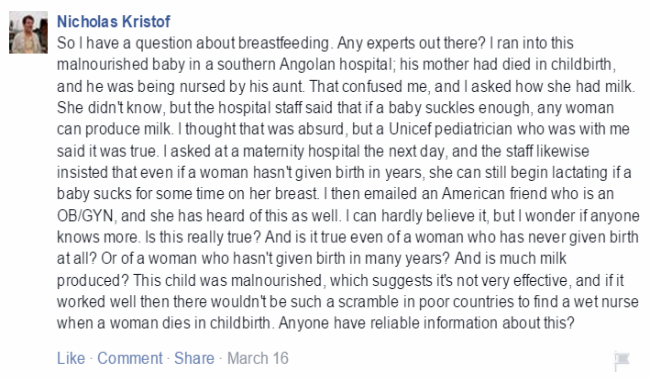 By the end of this post I was just as baffled as Mr. Kristof. How was this even possible? I could understand how a woman who has produced breast milk before could produce it again, but would she need to have lactated recently? As someone who has never given birth, could I start producing milk? I even started to wonder if Greg Focker was right, can you milk anything with nipples?

Thankfully, being the reliable journalist that he is, Kristof followed up with another Facebook post where he answered many of these questions. I’ll try to summarize his findings for you, but ultimately the answer is yes, with stimulation women can produce breast milk even if they have not recently given birth.

This process is sometimes called relactation or allonursing, and is triggered by stimulation. In this case it would be the baby suckling, but it takes a great deal of suckling for this to happen. Some women can produce milk starting in the child’s early infancy, while it may take others over a year.

What’s fascinating about this process is that women who have never given birth, and those well past menopause, can still produce milk in response to stimulation. This is both a bizarre and astonishing thought, and has me looking at my own breasts differently.

Kristof went on to question the quality of the breast milk produced and the effectiveness of the practice. This question arose because in the case in Angola the child was still severely malnourished and the practice seemed inadequate. Some research does indicate that the milk from relactation is essentially the same as the mother’s own milk, but more research would need to be conducted to see how effective the practice really is. In many cultures though, when a mother dies in childbirth, there is a strong preference for finding someone already producing milk to keep the baby alive. This would suggest that it works better when a woman is already lactating then having to generate the process.

While there seems to be limitations to relactation, I have to wonder- what could this practice mean?

In this case in Angola, we’ve seen how it could be used when a mother passes away in childbirth. But what if a mother passes away from an outbreak like Ebola? Or for women who are HIV positive and in the past have been advised not to breastfeed for fear of possible viral transmission? Could relactation be used to help provide the child with the nourishment and bonding they need?

I’m not sure I have the answers to these questions, but I think they are worth pondering. One thing I do know for sure though, is that the human body is capable of some pretty amazing things, and this is just one more incredible example.

If you would like to support the health of mothers and children, take action and sign the petition.