Eliminating Plastic Bags In Rwanda Saved Lives and the Economy

Rwanda is winning at sustainability in a way you wouldn’t expect.

I don’t know what it is about delis and grocery stores in New York but I have to say, they have not caught on to the movement to eliminate plastic bags yet. I still do not understand why I would need three plastic bags for the purchase of a yogurt and granola bar.  Daily life in New York City moves so quickly, it can be hard to remember to bring a reusable bag, and tell the cashier you are going to use that bag instead of a plastic bag. Especially when there’s a line of “mildly” impatient New Yorkers behind you.

There are states in the US that do not allow plastics bags, and I applaud them. But there’s a country in Africa that eliminated plastic bags from their systems several years ago.

Rwanda has been plastic bag free since 2008. The country completely banned plastic bags when other countries around the world started imposing taxes on plastic bags. Offenders smuggling plastic bags can even face jail time. But you won’t see plastic bags floating around streets, hanging from trees, and plugging up drains in Rwanda today.

How did a country recovering from genocide, war, and developing as a nation decide to prioritize getting rid of plastic bags?

Countries all over the world struggle with plastic waste, and for developing countries this is an even bigger challenge. As countries develop, people gain access to supermarkets, and can purchase packaged foods that were previously too expensive. The problem here is that governments in developing countries often lack the funds to create jobs in sanitation to clean up waste, recycle and deal with the influx of plastic trash from new infrastructure. 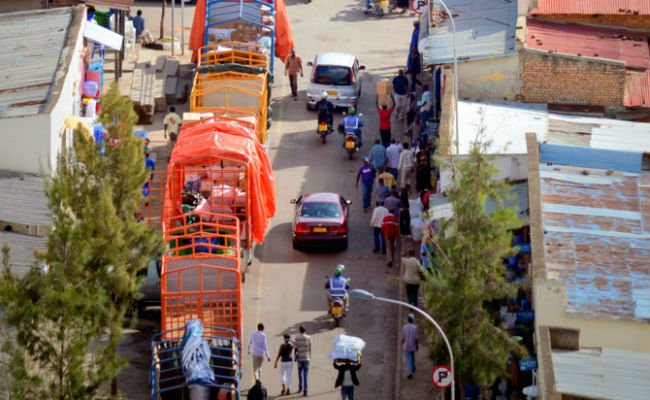 Not a plastic bag in sight on the street in Kigali.
Image: Flickr: IFPRI -IMAGES

Rwanda once had this problem. 45 percent of citizens in Rwanda live in poverty.  And Rwanda was emerging from one of the worst genocides in history–800,000 people were killed within several months.

Rwanda could have decided to impose a tax as other countries like the US have done. But instead Rwanda committed to banning plastic bags after having trouble with the cost of recycling the bags, and seeing Rwandans resort to burning plastic bags, which releases toxic pollutants into the air.

But despite these obstacles, Rwanda chose to ban plastic bags. The reasons behind this had to do with saving lives, and economics.

The negative impact of plastic trash on developing countries in Africa is huge. In Ghana, plastic trash clogged drains causing a flood that killed 150 people and led to fuel fire. The damage from this flood alone costs hundreds of millions in damage to the government of Ghana.

And the economics behind the ban:

Not only can eliminating plastic trash save lives, it also boosts economies. Rwanda has seen an increase in tourism, and as noted in this article fromThe Guardian compared to Uganda, a much cleaner environment.

Rwanda relies heavily on tourism and by eliminating plastics bags can promote eco-tourism and a cleaner greener environment than neighboring countries. 1.2 million tourists visited Rwanda in 2014–an increase of 4 percent in the last year.

In addition, Rwanda’s efforts to eliminate plastic bags and overall plastic waste by banning it saved funds that would have been needed to pay government employees to clean up plastic waste.

So the ban was a pretty smart move economically.

Plus, Kigali, Rwanda is considered by some to be the cleanest city in Africa.

What’s next on the sustainability agenda for Rwanda?

Rwanda has a plan to become a middle-income country by 2020 and a large part of how the country aims to get there has to do with sustainability measures. Rwanda aims to be the first country to eliminate all plastic waste, and it sounds like this is not a farfetched goal for the country, if one looks at the success the country had banning plastic bags.

Rwanda will also continue to combat smuggling plastic bags from neighboring countries and the plastic bag black market that emerged as a result of the ban.

Waste from plastic trash is a global problem. As my colleague Caryn points out in this article, over 8 million metric tons of trash makes it into oceans each year. But sustainability leaders are found all over the world, and Rwanda sets an example that all countries can follow.

GO to TAKE ACTION NOW and TWEET to tell world leaders to provide support for the countries most severely impacted by pollution.