Anna Watts for Global Citizen
Why Global Citizens Should Care
Without urgent action, the United Nations warns that climate change will severely disrupt human life in the decades ahead. You can join us in taking action on related issues here.

The meme game was strong at New York’s Climate Strike on Friday, but no joke captured the restless mood of the event better than the infamous “This Is Fine” dog sitting in a burning house, which appeared in different guises on various signs.

The meme, which ironically channels young people’s rage at the lack of meaningful climate action around the world, also happens to echo the words of the Swedish climate activist Greta Thunberg when she told leaders at the World Economic Forum earlier this year to “act as if the house is on fire.” Thunberg’s influential Fridays for Future strikes, which began as a solitary protest more than a year ago, ignited the global movement that flooded streets and town squares in more than 150 countries on Friday. 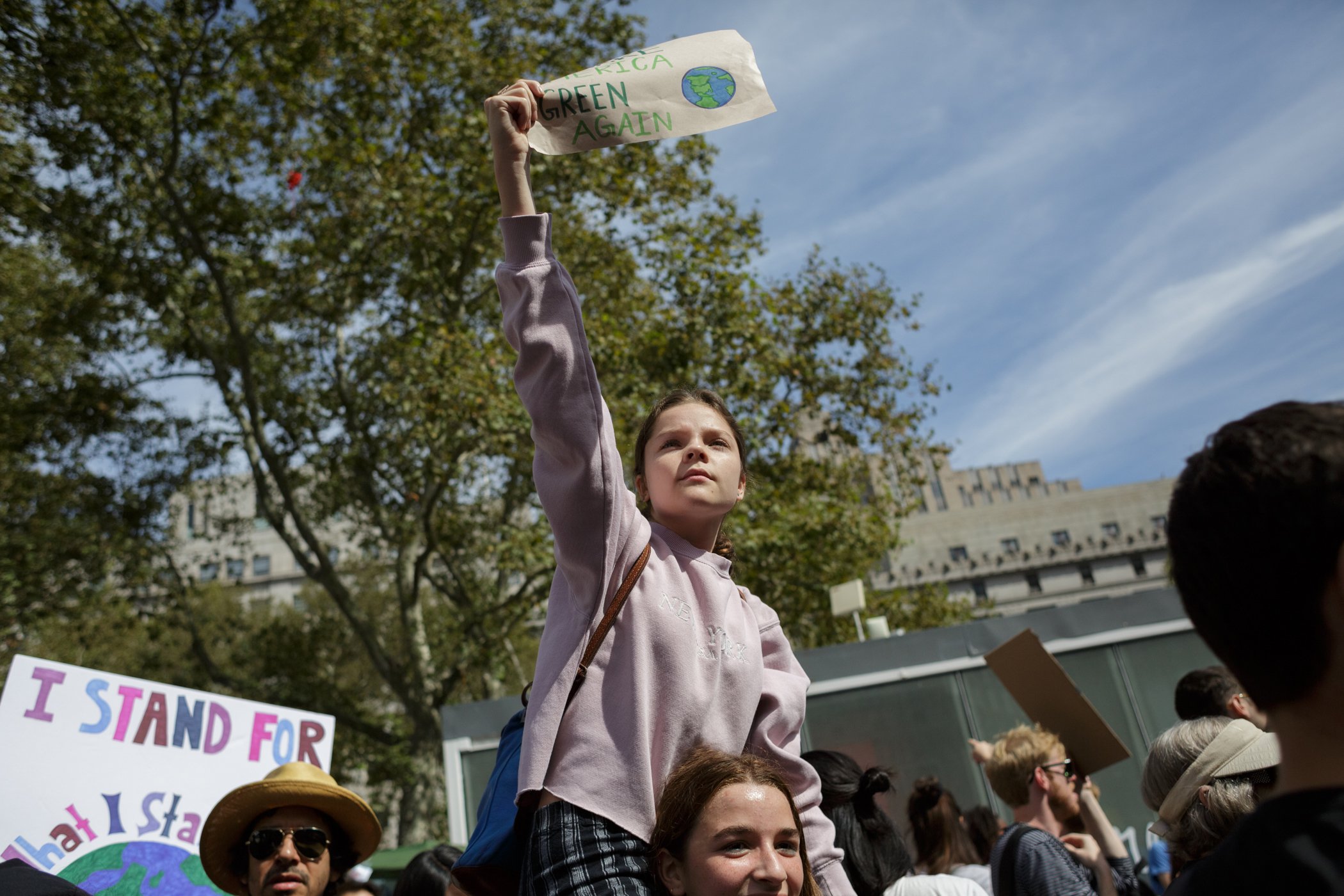 From Kabul, Afghanistan, to Berlin, Germany, millions of people took to the streets to clamor for global cooperation in the face of the climate crisis.

Thunberg led the New York march in downtown Manhattan, carrying her signature “Skostrejk for Klimatet” sign. She was joined by a massive crowd, including tens of thousands of children who were skipping school to follow in Thunberg’s footsteps. People chanted, sang, played music, and hoisted funny and sobering signs to send a clear message to world leaders that climate change is an urgent crisis that demands urgent solutions. 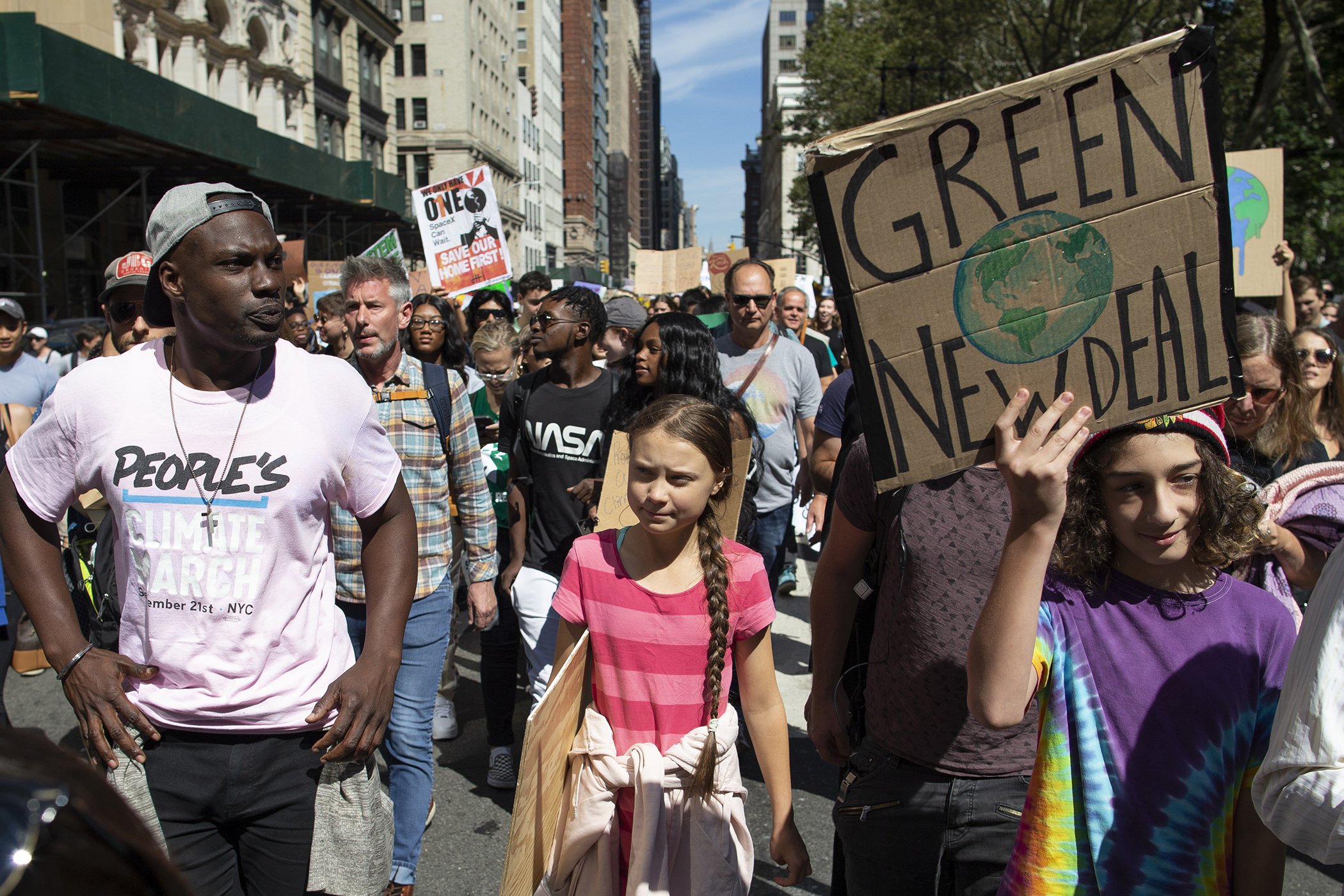 The Climate Strike calls for nothing less than a transformation of modern society and a rapid shift away from fossil fuels to avoid catastrophic environmental consequences. Leading environmental activists hope to use the momentum of the movement to pressure governments to significantly escalate their efforts to achieve the Paris climate agreement.

The global protest coincides with the United Nations General Assembly, which began Sept. 17 and runs through next week. On Sept. 23, leaders will attend the UN’s Climate Action Summit to negotiate strategies for pursuing zero emissions.

The UN has increasingly put climate change at the center of its development agenda.

“The biggest challenge that leaders and institutions face is to show people we care [about climate change] — and to mobilize solutions that respond to people’s anxieties with answers,” UN Secretary-General António Guterres recently told reporters. “The upcoming high-level week is designed to do precisely that.

“Put people first,” he added. “Their needs. Their aspirations. Their rights.” 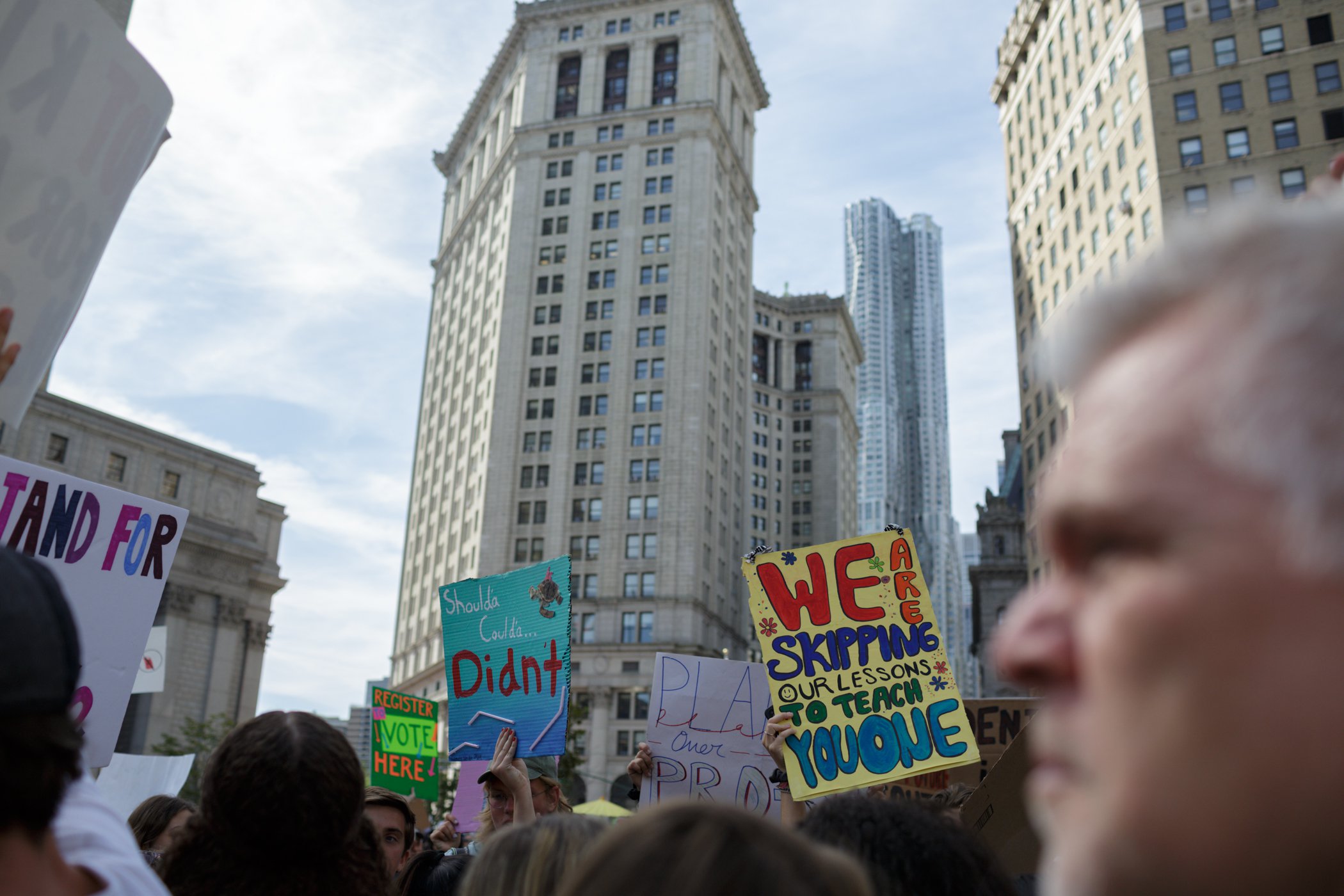 Over the past year, the UN has released several dire reports and statements on the state of the global environment.

“Limiting global warming to 1.5 degrees Celsius would require rapid, far-reaching, and unprecedented changes in all aspects of society,” the Intergovernmental Panel on Climate Change (IPCC) wrote in its latest report.

Rising global temperatures could soon create a “climate apartheid,” while all the progress made against poverty could be unraveled by ecological decline. Current levels of resource extraction, meanwhile, are destroying land and marine ecosystems, and water sources will become dangerously scarce in the decades ahead.

People from all walks of life attended the march in New York on Friday, and they emphasized the need for urgent action.

Ashley and Albert, who declined to give their last names, traveled 11 hours by train from Montreal to lend their support to the movement, and said they’re trying to forgo air travel to reduce their carbon footprints. 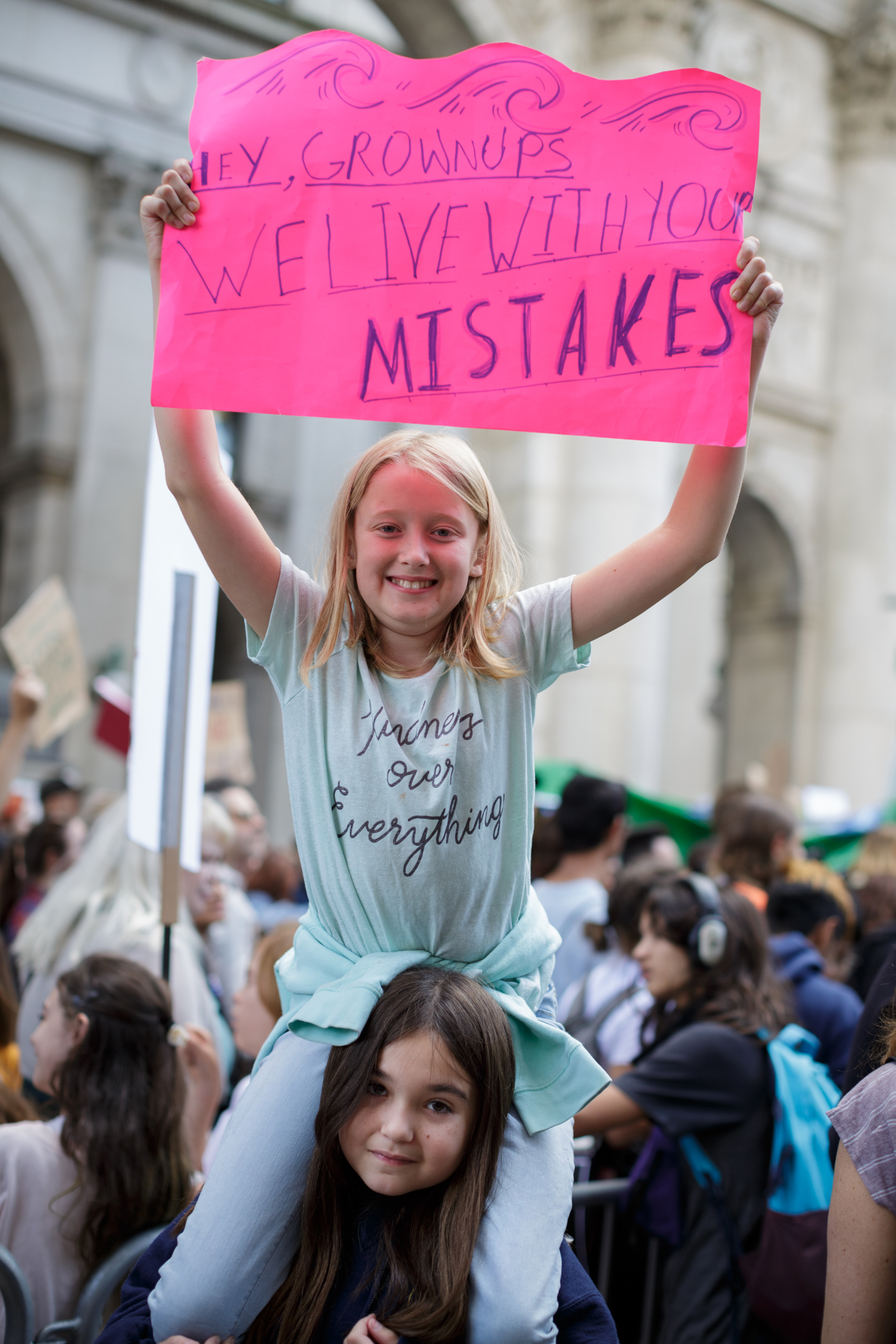 Global Climate Strike
Greta Thunberg’s influential Fridays for Future strikes, which began as a solitary protest more than a year ago, ignited the global movement that flooded streets and town squares in more than 150 countries on Friday.
Anna Watts for Global Citizen 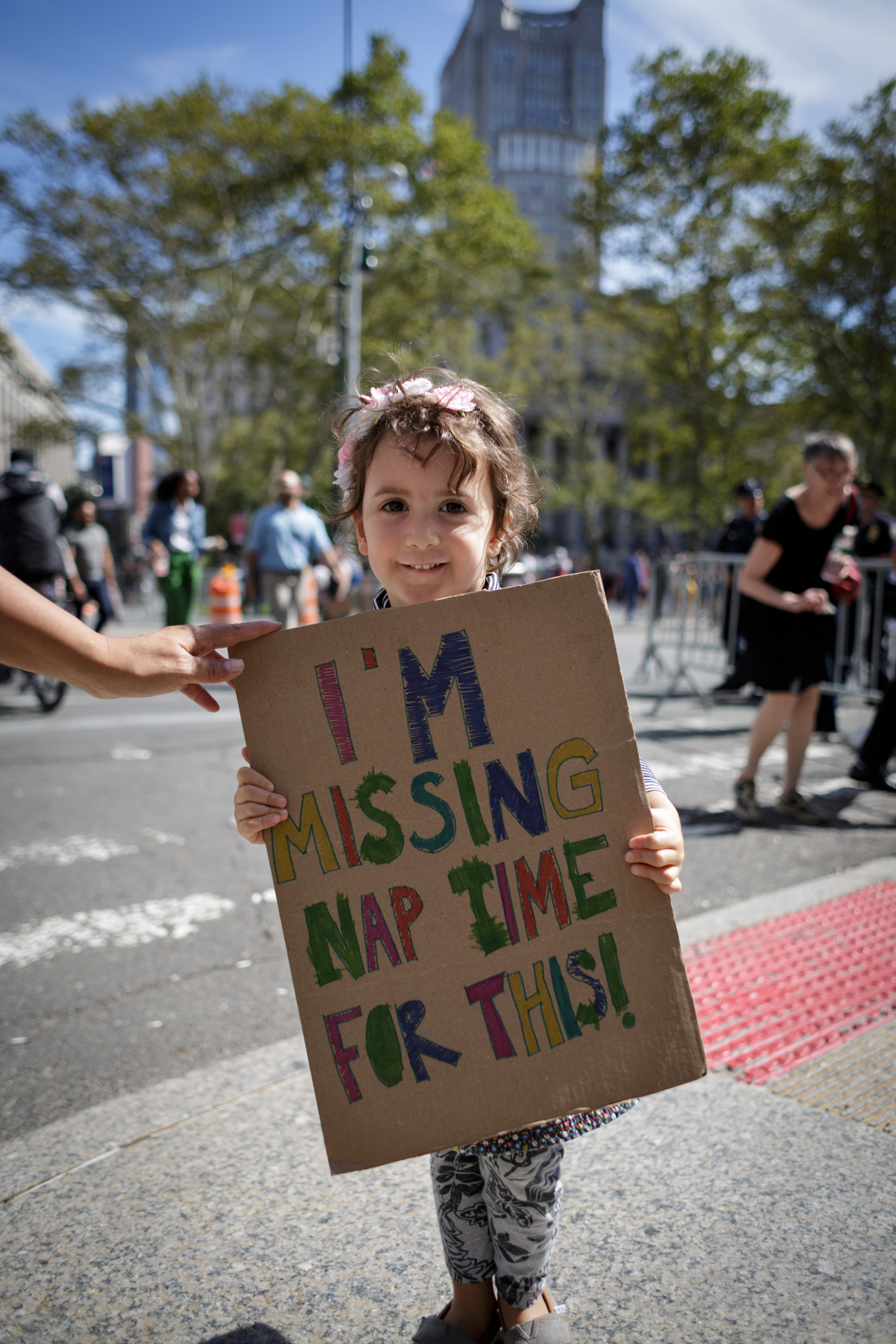 Global Climate Strike
A young protestor hold signs during the Global Climate Strike demonstration in New York, NY., on Sept. 20, 2019. From Kabul, Afghanistan, to Berlin, Germany, millions of people took to the streets to clamor for global cooperation in the face of the climate crisis.
Anna Watts for Global Citizen 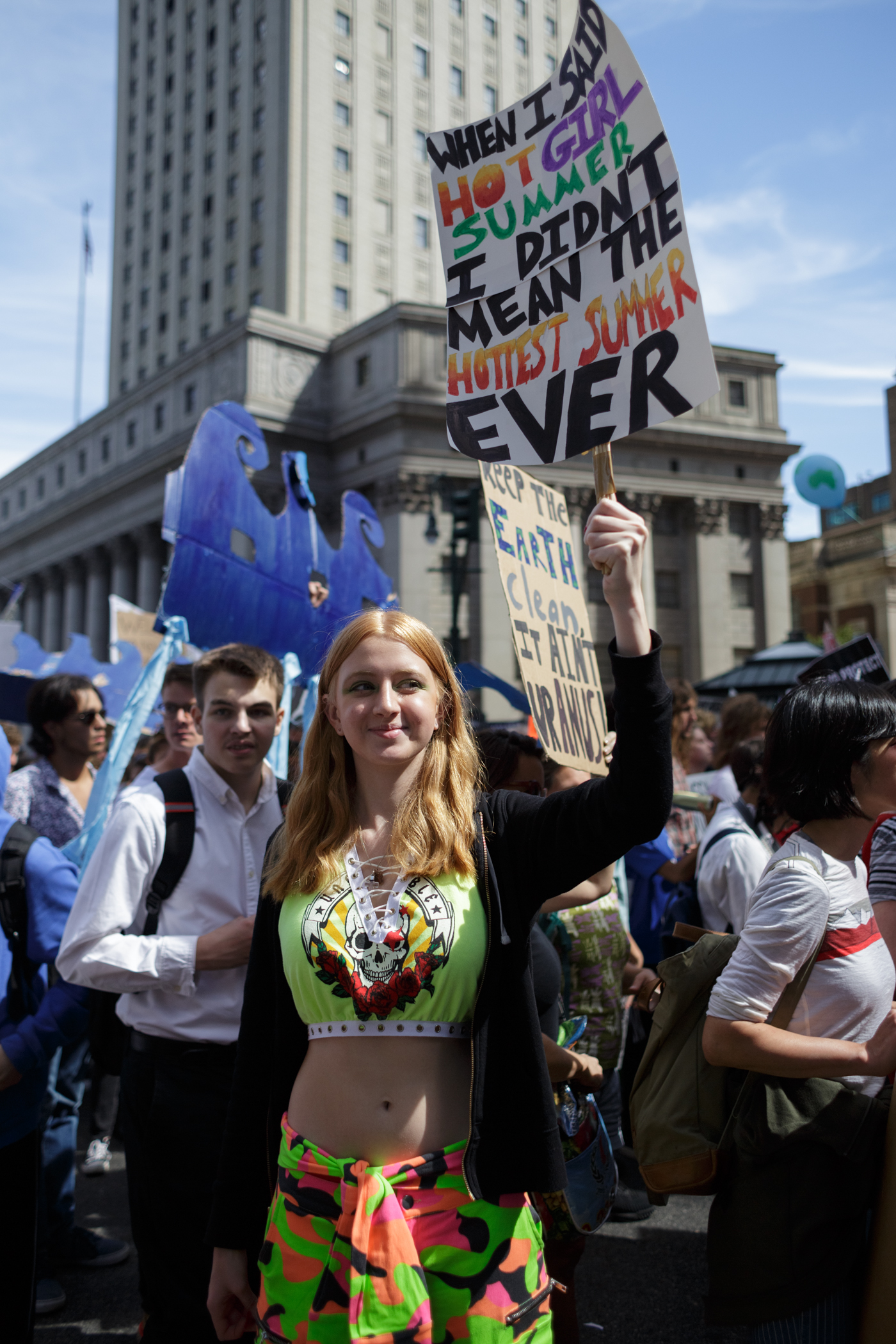 Global Climate Strike
The global protest coincides with the United Nations General Assembly, which began on Sept. 17 and run through next week.
Anna Watts for Global Citizen 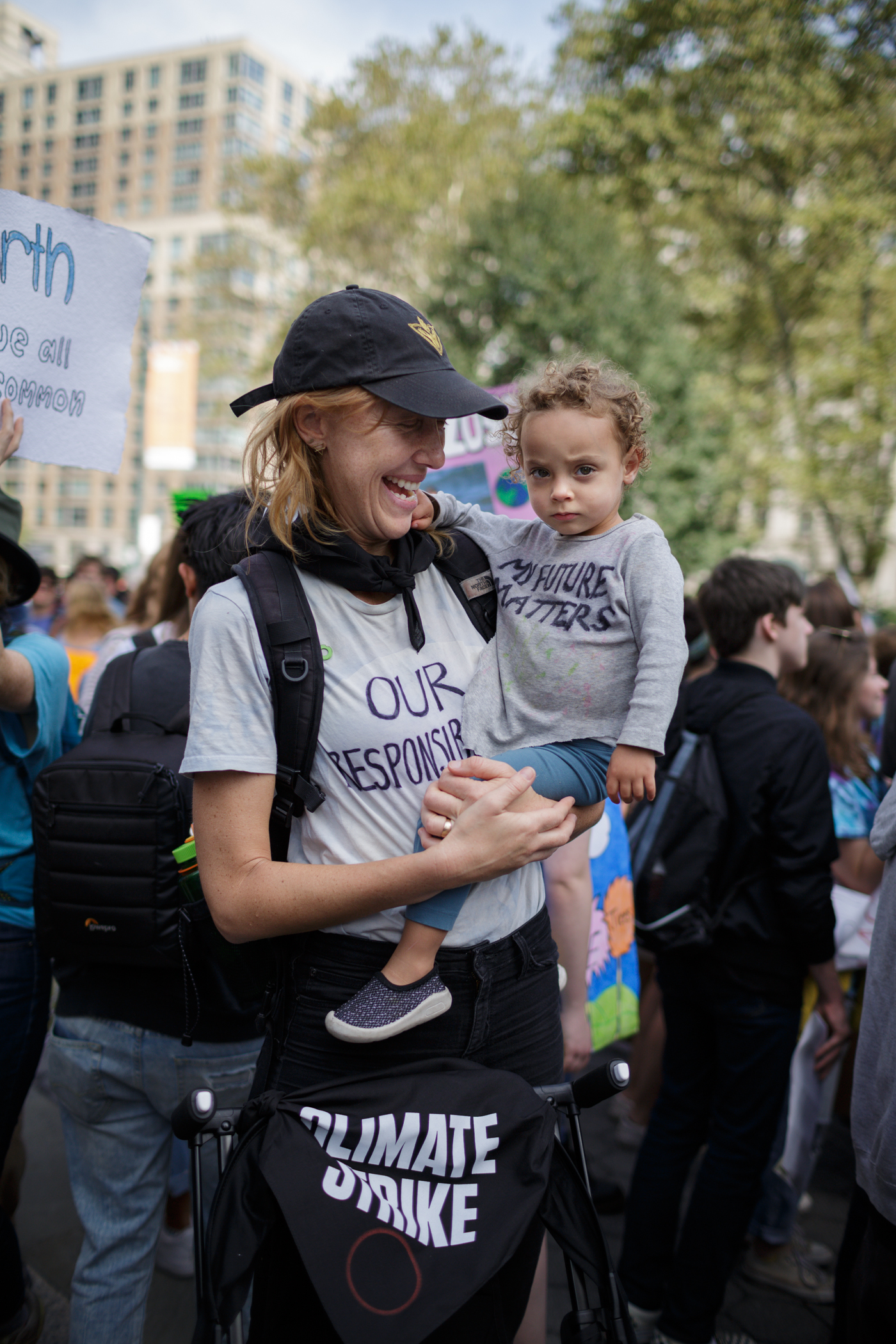 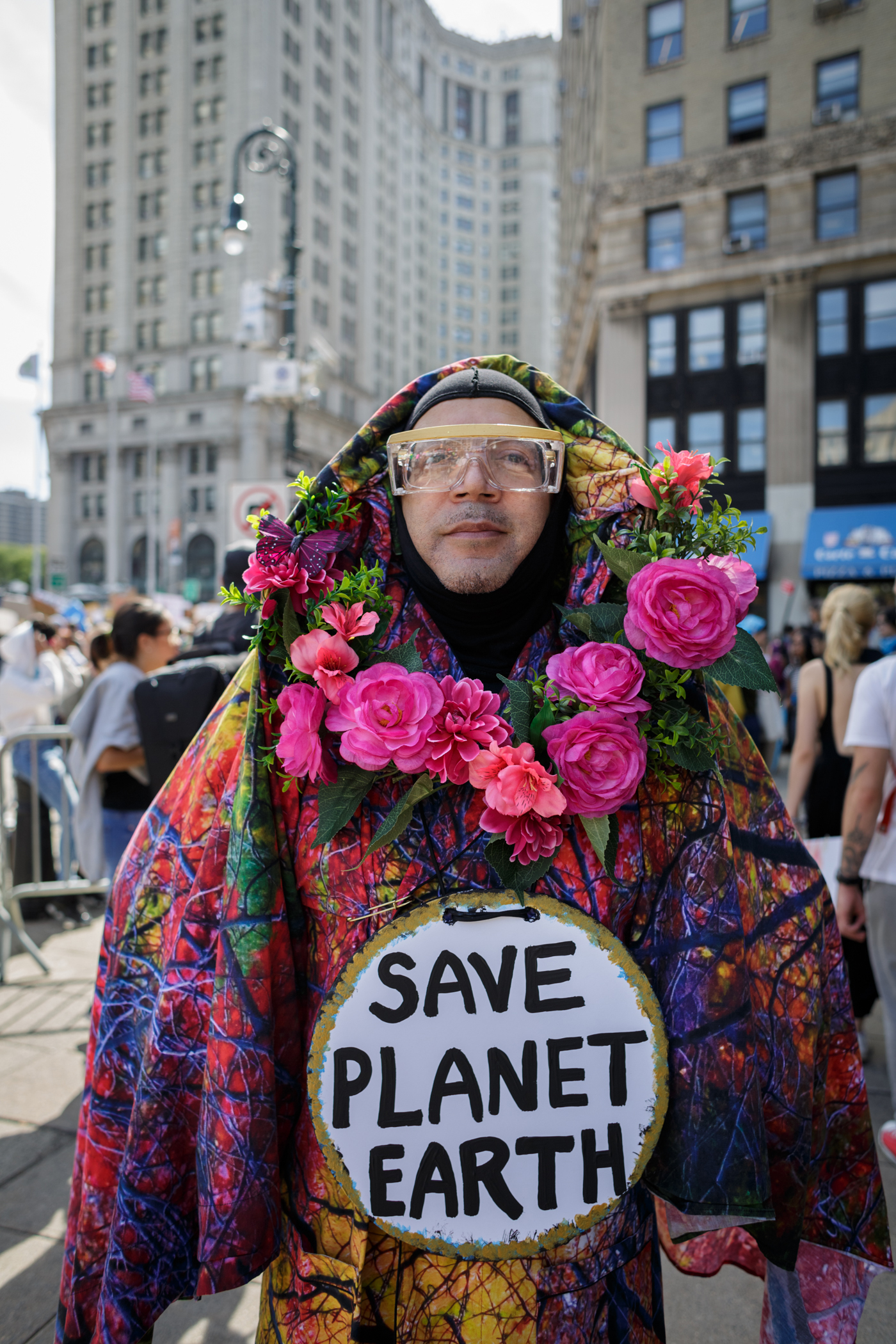 Christine Tylee, a local environmental activist, was there to advocate for wildlife. The UN warns that more than 1 million species could go extinct in the decades ahead.

Articles liés 11 septembre 2019 A Wall That That Unifies Not Divides: The Great Green Wall

“I’m here for the health of our future, for my future potential children, and the animals that are here with us,” Tylee said.

Victoria Bogdan Tejeda, an environmental lawyer with the nonprofit legal organization EarthJustice, said she was there to support the students marching.

“Because they’re the generation that will bear the brunt of the impacts and I’m so inspired to see people care and I’m humbled to help,” she said.

Many people said politicians need to begin listening to scientists and passing laws that reflect the latest climate research. 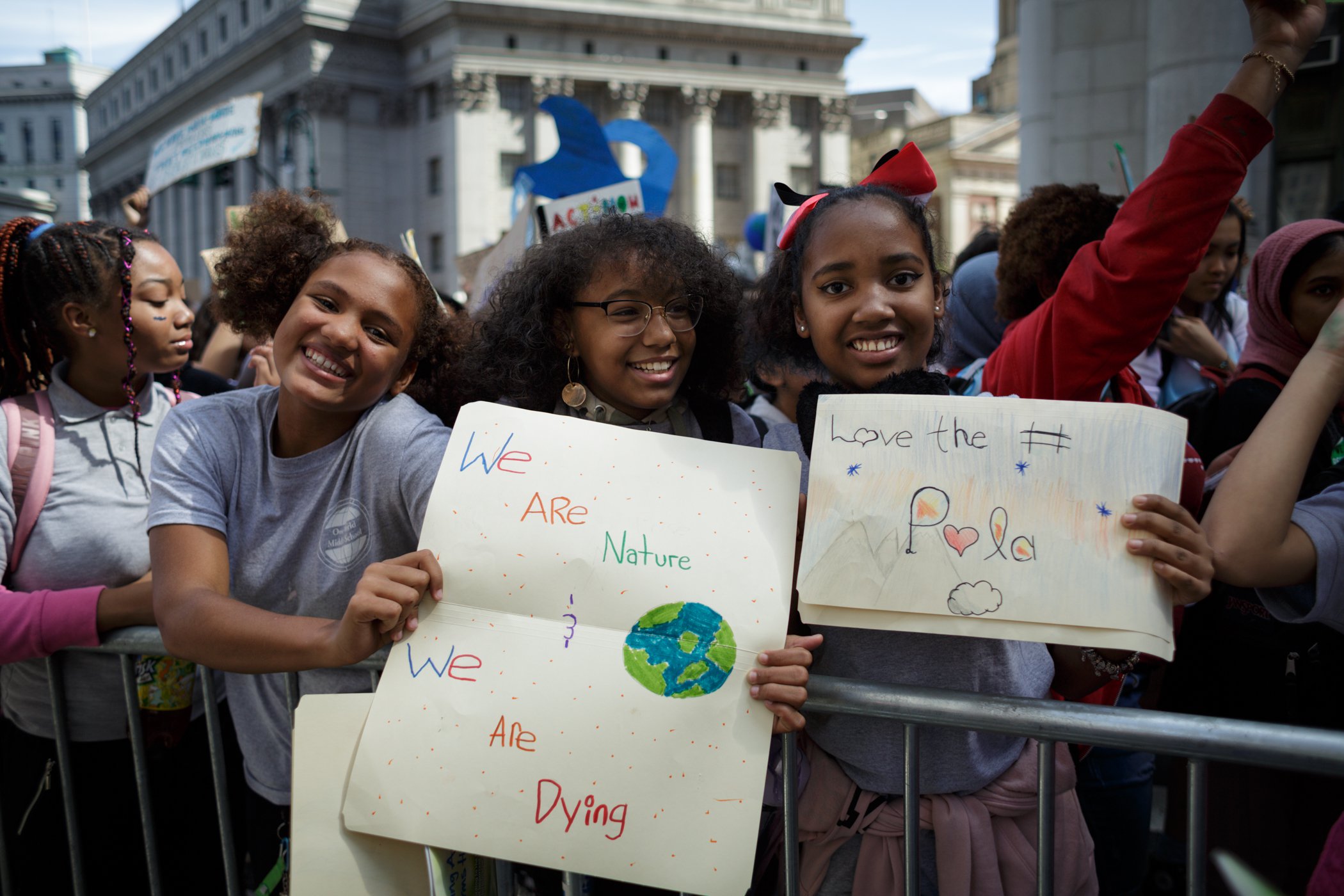 The students who skipped school to join the strike emphasized the generational schism at the heart of the debates surrounding climate change. For them, nothing less than their future ability to live safe and fulfilling lives is at stake. They worry about their careers, their future kids, their ability to get clean water. They wonder what the world will be like if greenhouse gas emissions continue unabated. They feel a deep sense of urgency to act now and they're unwilling to wait on incremental change as forest fires ravage precious ecosystems and coastlines vanish, as extreme storms pummel the most vulnerable populations and rising temperatures unleash new, catastrophic norms.

“The earth’s temperature is changing at a rate that’s far exceeding our estimates,” student Nick Leone said. “I get nervous about the potential of my future children saying, ‘Why didn’t you do something when you could?’” 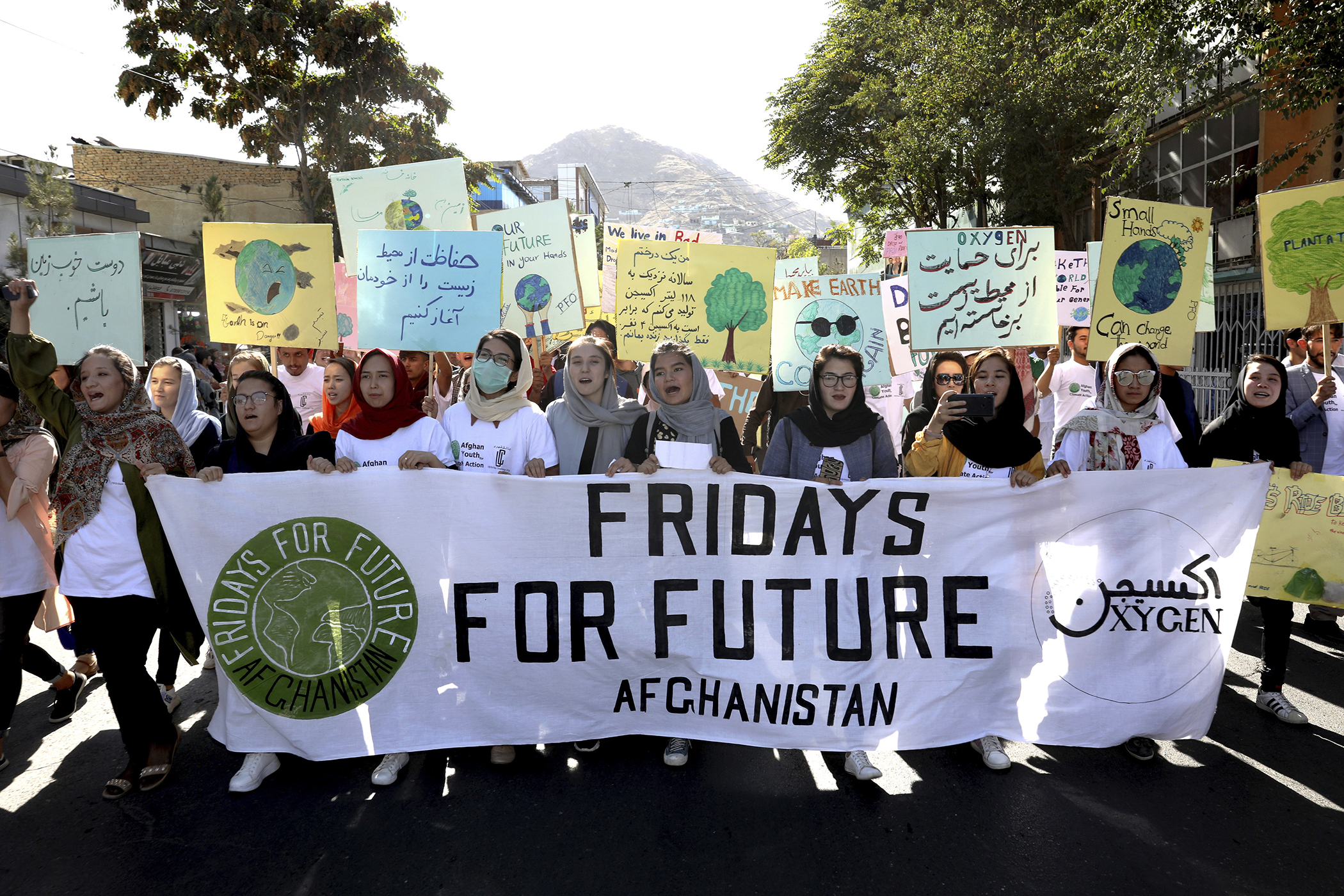 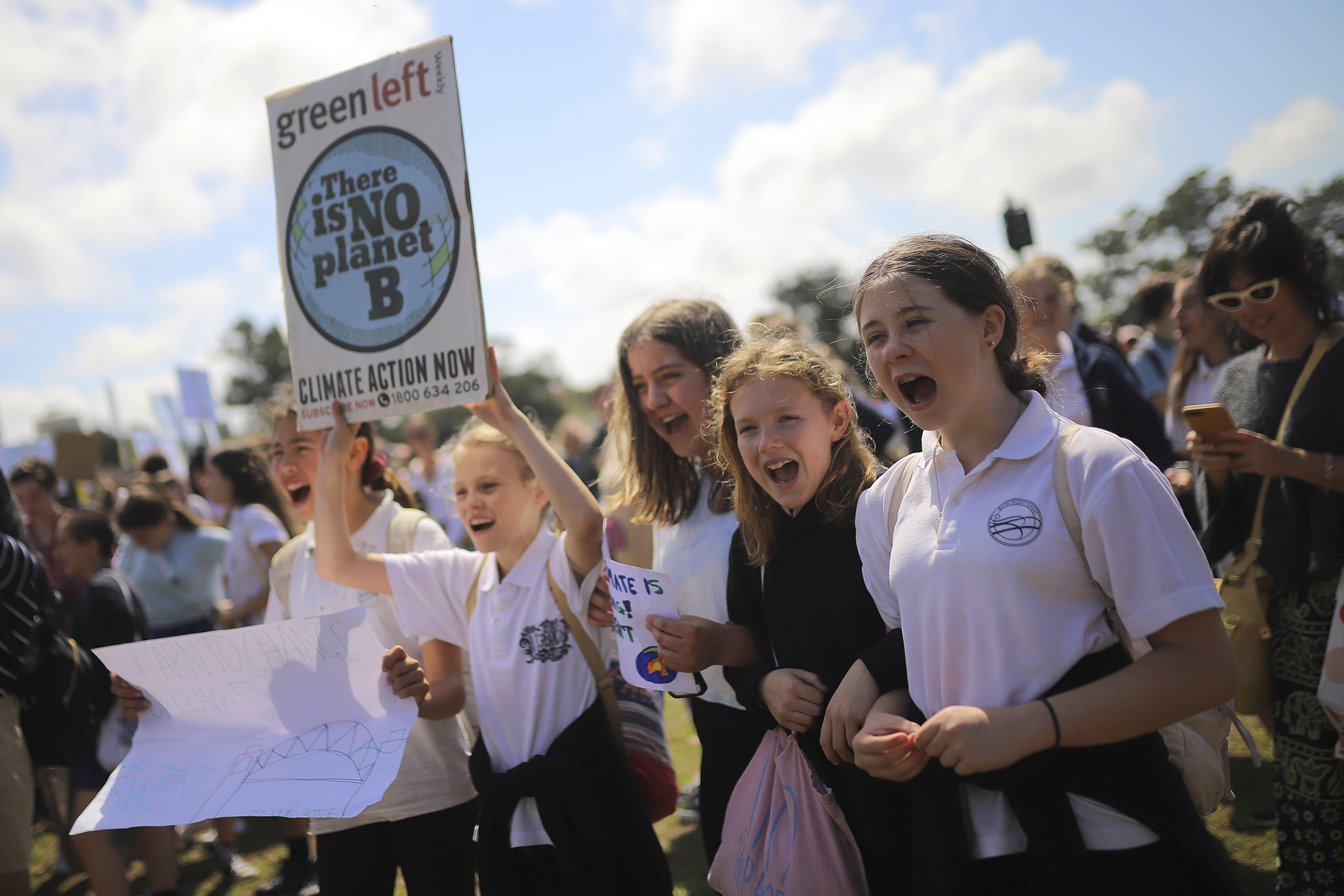 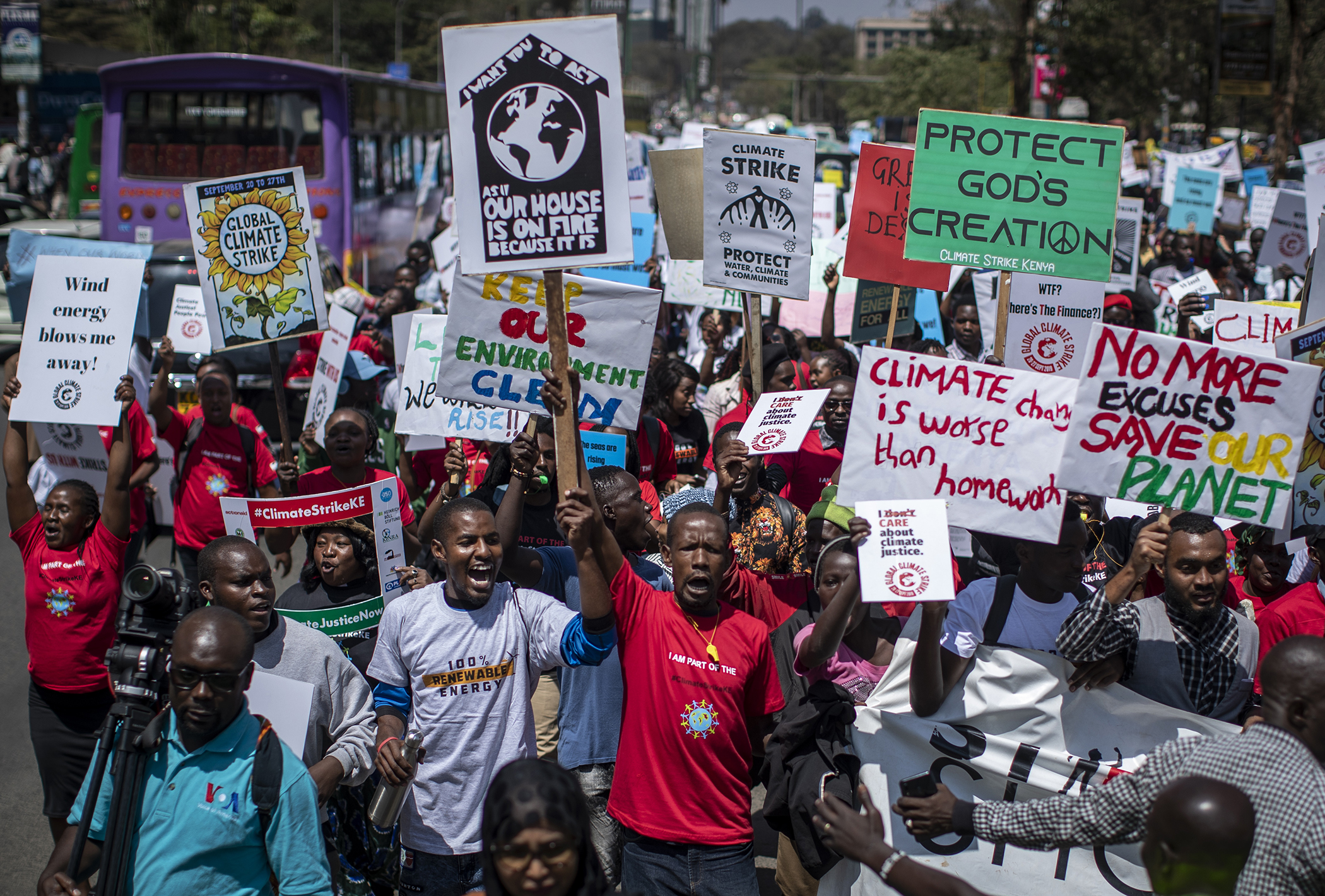 Climate Strikes Around the World
Around a thousand protesters march to demand action on climate change, in the streets of downtown Nairobi, Kenya, Sept. 20, 2019.
Ben Curtis/AP 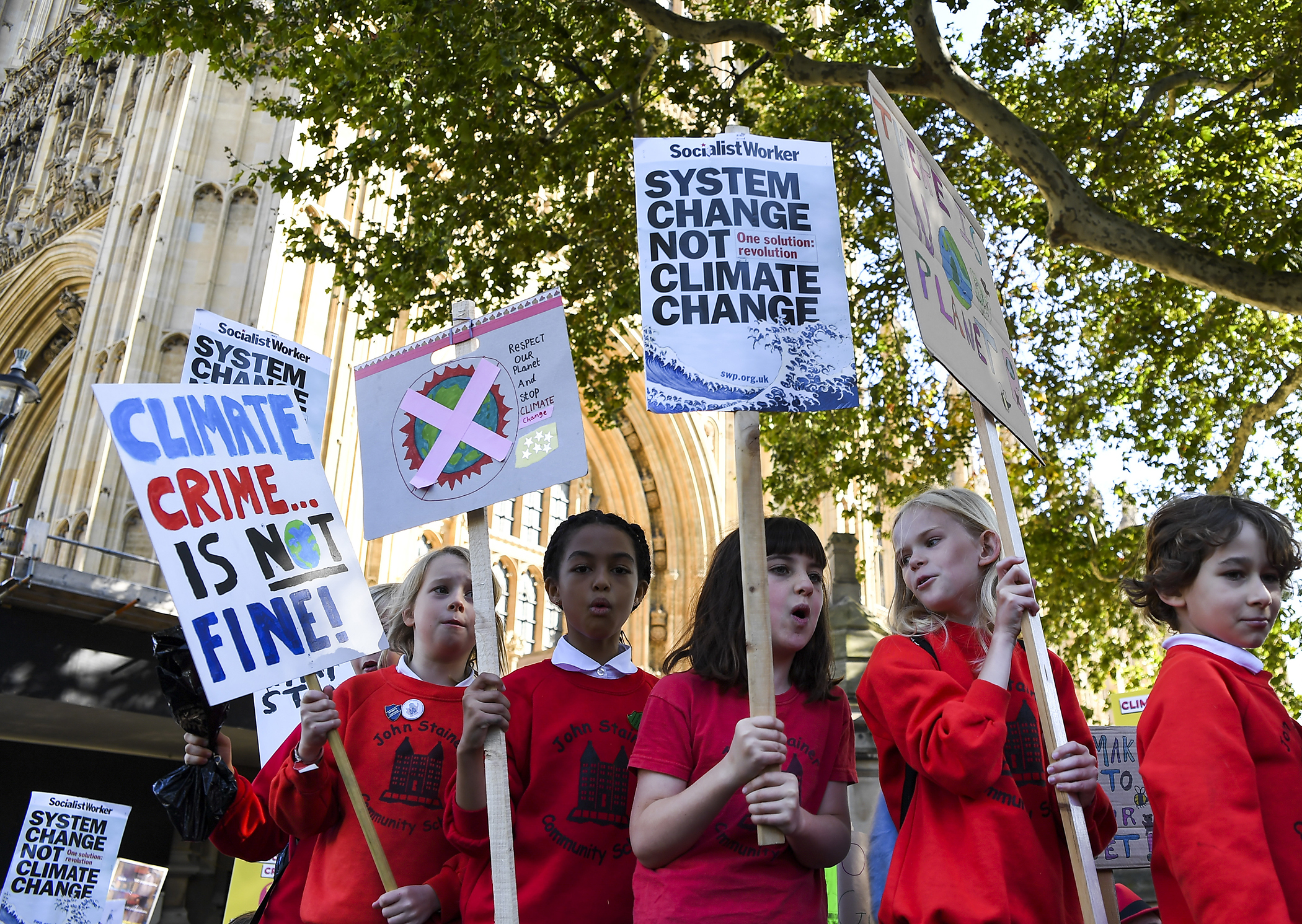 Climate Strikes Around the World
Schoolchildren protest with banners outside parliament in London, Sept. 20, 2019.
Alberto Pezzali/AP 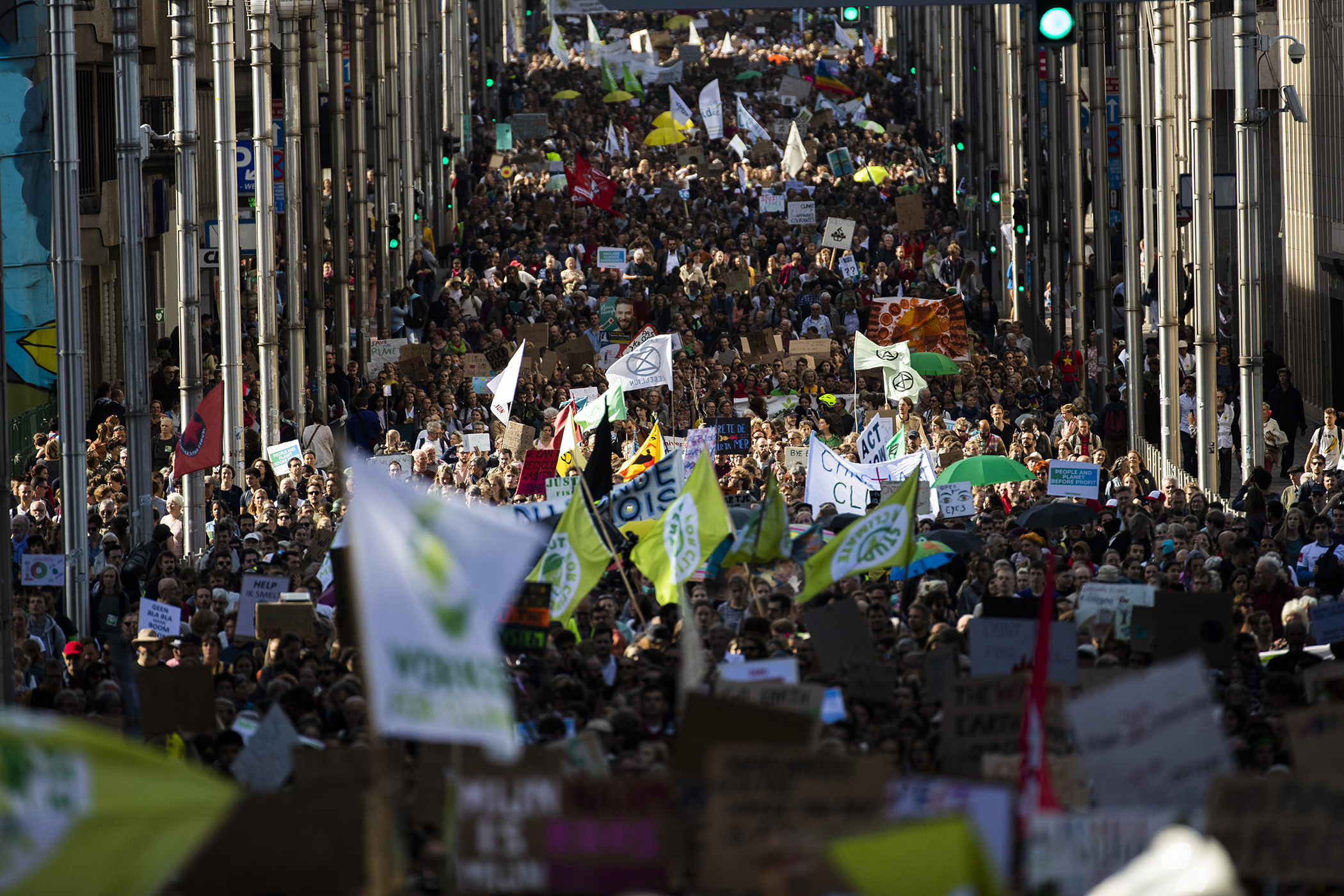