While 20 million remain on brink of starvation

In a world where we waste 1.3 billion tons of food every year, it seems unfathomable that there are still people who die from not having enough to eat.

And yet, 20 million people right at this moment are on the brink of starvation in South Sudan, Somalia, Nigeria, and Yemen, with 1.4 million children at imminent risk of dying due to extreme hunger, lack of healthcare and poor living conditions.

This is a man-made disaster that requires the attention of world leaders and long-term investment. Precisely the kind of investment plans that should have accompanied a pledge made by the G7 in 2015 to lift 500 million people out of hunger by 2030.

However, two years on from this pledge, no tangible moves have been made by the G7 countries to put this pledge into action. And with the two-day annual G7 summit just a few days away, it is becoming worryingly clear that the situation will not evolve. No real financial commitments or concrete plans are expected to be announced at the summit in Italy on May 26 and 27.

Which means 795 million people will continue to go to bed hungry every night, and we will likely see a famine like the one occurring today again in the near future.

The famine has got so acute that the UN announced it will need $4.4 billion by July to save millions of people just “months from starvation.” Thankfully, US Congress stepped up recently, announcing they were going to provide $990 million in emergency funding to fight the famine, thanks to Global Citizens who took 49,291 actions on the urgent issue, and a bipartisan effort spearheaded by Rep. Tom Rooney (R-FL) and Rep. Barbara Lee (D-CA) in the House of Representatives.

In an open letter to G7 attendees this week the two lawmakers urged the countries to take action on the escalating food crisis. Critically the note also implored them to consider not simply dealing with the immediate issue but to dedicate ‘life saving resources’ for the long-term also.

Although much of the food crisis we face today is directly due to conflict in the affected countries, a long-term lack of investment and planning around food security and nutrition means many people were affected by malnutrition before these conflicts started.

The growth of the terrorist group Boko Haram in the Niger region has been attributed to lack of resources. And in Yemen, one of the other affected countries, where over 700,000 children are currently so malnourished they are at risk of death, was experiencing severe food shortages even before conflict broke out.

Countries like Kenya and Ethiopia, add yet more proof of the importance of long-term investment; proactive planning put in place after the drought and resulting food shortage in 2011, have enabled swift response to recent droughts, preventing the situation from becoming as dire as it could be.

Prevention over response is the cornerstone of our approach to tackling poverty at Global Citizen. And is why we have engaged in a long running campaign since last year to persuade Italy as hosts of the G7 in 2017 to commit to a proper development plan on the issue of food and hunger. 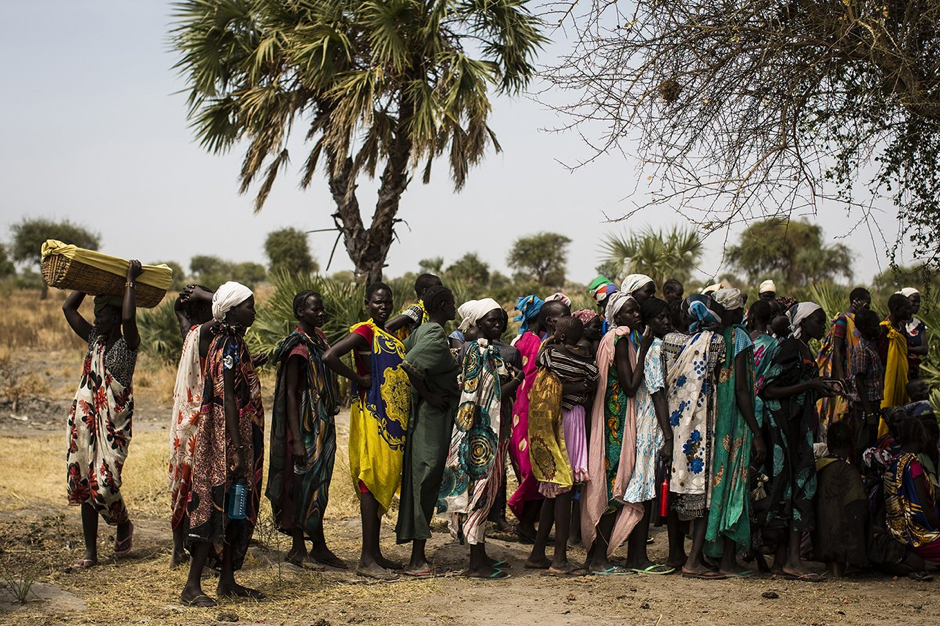 Women wait with their children to be examined and possibly given supplementary food in a mobile clinic run by UNICEF in the village of Rubkuai, South Sudan, Image: Photo by Siegfried Modola/UNICEF

In the lead up to the Global Citizen Festival last year, thousands of our fellow activists tweeted at the former Italian Prime Minister, Matteo Renzi, urging him to follow through on the G7 pledge to lift 500 million out of hunger. Chelsea Handler even face dived into a bowl of pasta. Over 65,000 Global Citizens have spoken up to spur the G7 into action.

However as of yet, the G7 have failed to make a plan or commit any additional money to reach their target to lift 500 million people out of hunger and malnutrition by 2030.

Criticism has been levelled over the years at the G7 for making promises yet no concrete commitments — with the previous Brazilian President Luiz Inácio Lula da Silva even declaring it “doesn’t have no more reason to exist.”

As a collection of countries that represent nearly half of all the world’s GDP, the G7 could serve as a critical collaborating power in achieving an end to extreme poverty. For the future of our world and its most vulnerable inhabitants, we hope that this year’s summit proves suspicions of its inefficacy to be false.