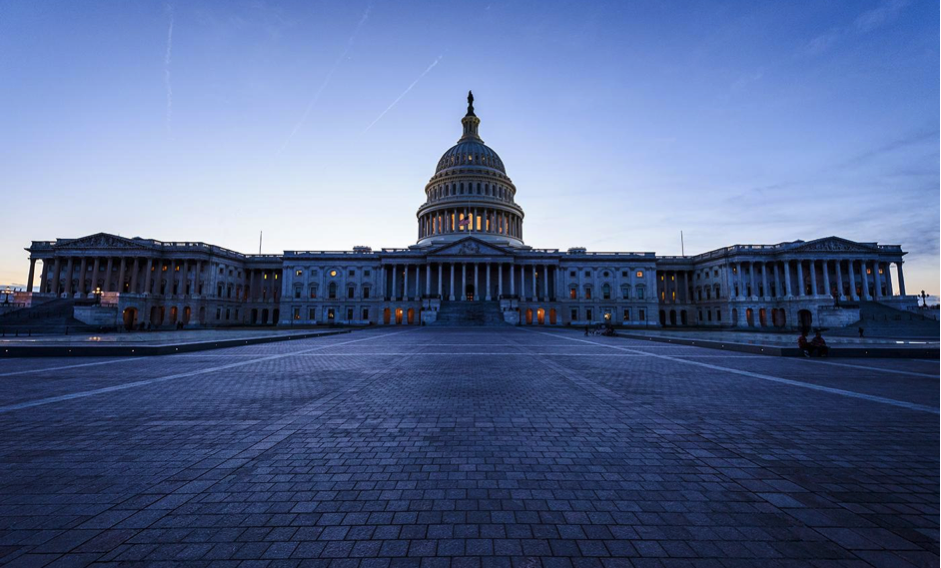 President Trump’s proposed cuts to foreign aid have provoked deep concern among many in the humanitarian community and beyond. And for good reason.

America leads the world when it comes to foreign assistance. They are the single biggest contributor of all countries across the globe. To put it in perspective, the UN refugee agency (UNHCR) received $1.5 billion of its $4 billion budget from the US last year.

“Multiply that across other humanitarian agencies, like the World Food Programme,” stated Richard Gowan, a U.N. expert at the European Council on Foreign Relations, “And you are basically talking about the breakdown of the international humanitarian system as we know it.”

America’s aid budget not only supports billions of people but plays a critical role in the world’s stability in these increasingly volatile times.

"The United States is a global leader, and with growing uncertainty in the world, now is no time to vacate our seat,” Rep. Steve Womack, a Republican from Arkansas, explained.

Thankfully the words of Rep. Womack, and the protests from many of his fellow congressmen, did not fall on deaf ears.

On Monday morning, Republicans and Democrats joined together to announce a budget deal for 2017, which largely rejects President Trump’s requested cuts and firmly places the United States as the undisputed leader of the world when it comes to foreign assistance. And that deal was just passed today at 2 p.m. ET.

The agreement, which has been called “a bipartisan win for the American people” by Vice President Mike Pence, lays out a budget of $1.6 billion for USAID — an increase of $82 million compared to last year.

Crucially, it also preserves key funding levels for the core issues that Global Citizens have spent the last year relentlessly speaking up on; with $233 million going to polio eradication, $400 million to safe water and sanitation, $275 million for reaching children with life-saving vaccines, $125 million to ending hunger and $800 million will help provide a basic education and a brighter future for the youth of today.

Read more: The Trump Administration Is Planning to Slash UN Program Funding by Half: Report

Other positive news for humanity contained in the deal were the sustained spending on vital services such as a commitment to funding most of the US Environmental Protection Agency’s (EPA) programs to at least the end of the year and a $2 billion increase in funding for the National Institute of Health — a great outcome considering the Trump administration had sought a $1.2 billion reduction in funding for the agency for the current fiscal year.

And not forgetting the powerful words of Majority Leader Mitch McConnell (R-KY), who stressed the importance of development and diplomacy highlighting that, “many times diplomacy is a lot more effective — and certainly cheaper — than military engagement.”

Yet, for this to have been possible it is thanks to global citizens like you who gave US leaders the public pressure — and thus the permission — they needed to make this budget a reality.

Global Citizens took an impressive 137,534 actions to urge the United States government to provide funds for vaccine access, education provision, polio eradication and food to fight famine — a collective effort that is set to affect the lives of at least 45 million of the world’s most vulnerable.

To learn how the next year looks for these four core issues that we campaign across to see an end to extreme poverty by 2030, read on.

Life-Saving Vaccines to Touch the Lives of 11 Million

The United States increased funding for Gavi, the Vaccine Alliance, by $40 million — the amount that Global Citizens — who took 29,923 actions on this issue — demanded. US dollars spent on ensuring children in the world’s poorest countries receive life-saving vaccines will go from $235 million in 2016 to $275 million this year. This move that will affect the lives of 11 million people according to our estimates.

This is another critical step in achieving the 2015 pledge made by the Obama administration of $1 billion in funding, for four years, until 2018.

Global Citizen worked closely with key partners like RESULTS and PATH to achieve this outcome. Around the 2016 Global Citizen Festival, 28,250 Global Citizens signed a petition calling on the United States government to increase funding for Gavi, the Vaccine Alliance in 2017. Global Citizen also met with key members of congress to build their support for routine immunization. 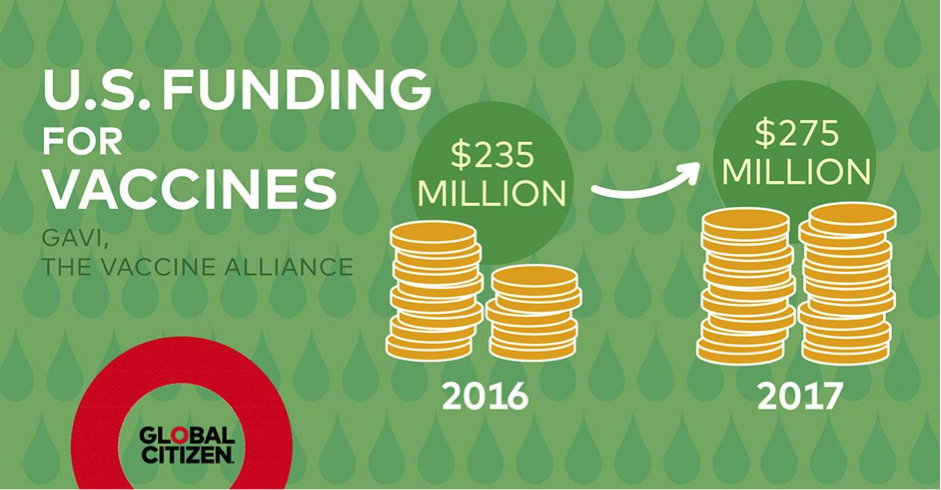 Water and Sanitation for a Cleaner, Safer World

The United States has maintained funding for water and sanitation programs at $400 million for 2017. Based on past impact data released by the United States government, Global Citizen anticipates that this pledge could impact around 400,000 lives. We are in continuined conversation with USAID to develop a more clear understanding of the lives that will be affected by this announcement. 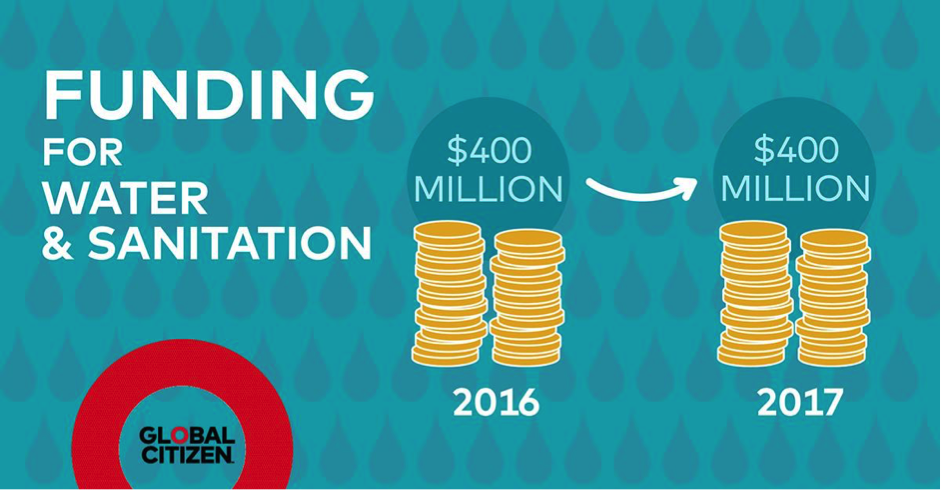 “Whether it is at home or abroad, access to basic education is integral to the foundation of a stable and prosperous society, this is especially true in developing or war-torn countries” and yet, as Sen. Marco Rubio (R-FL) explained when introducing the READ Act (S. 623) for basic education to the senate earlier this year, “Every day, millions of children around the world are denied access to basic education, making them vulnerable to poverty, abuse, and extremism.”

Global Citizens are well aware of this stark reality, which is why they took over 63,000 actions across the course of 2016 to target the US government to prioritize global education. Joined by our tireless partners RESULTS, the Basic Education Coalition and Global Campaign for Education, we shared your voices in Congress to call for heightened funding for global basic education. Beyond meeting with congressional offices, we also had the opportunity to facilitate a public dialogue between refugees living in Iraq and US Representatives to demonstrate the importance of a quality and safe education for all children.

So we are very pleased to announce that the United States increased funding for the Global Partnership for Education by 15 percent — from $70 million in FY16 to $75 million in FY17. This commitment is meant to help the most marginalized and vulnerable children access an education, and according to our estimates, it is set to affect the lives of an incredible, 21,048,387 individuals. Overall levels of United States international basic education funding have remained the same from FY16 to FY17. 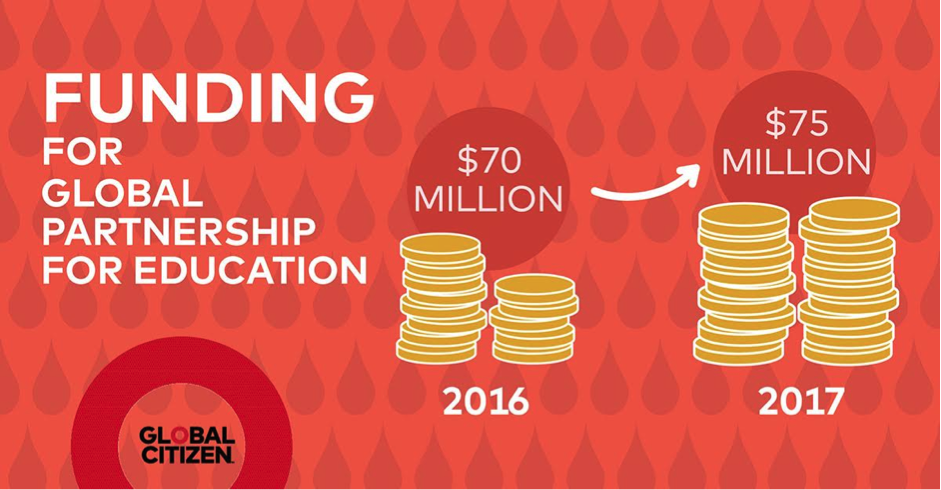 Protection from polio for over 13 million

Funding for polio eradication increased from $228 million in 2016 to $233 million in 2017,with $7.5 million earmarked for vital programs in Pakistan and Afghanistan — two of the last remaining countries where polio still causes preventable deaths.

This is a very promising announcement that will help reach 450 million children in over 690 countries to protect them against polio. US leadership on polio has already spared over 16 million people from polio-related disability. This new commitment should affect the lives of over 13.3 million additional people according to our rough estimates. Global Citizen will remain in contact with the Global Polio Eradication Initiative to confirm the lives impacted by this new funding announcement.

On June 16, Global Citizen joined Rotary International and the United Nations Foundation to host a congressional briefing on polio eradication efforts. With speakers from key organizations like the Centers for Disease Control and Prevention (CDC), the briefing demonstrated the importance of polio eradication efforts and addressed why continued funding from the United States was essential to reaching a world without polio.

Thanks to the incredible advocacy from partners like Rotary International and United Nations Foundation’s Shot @ Life campaign, and the 31,779 actions taken by Global Citizens on this critical issue, we are closer than ever to a world without polio. 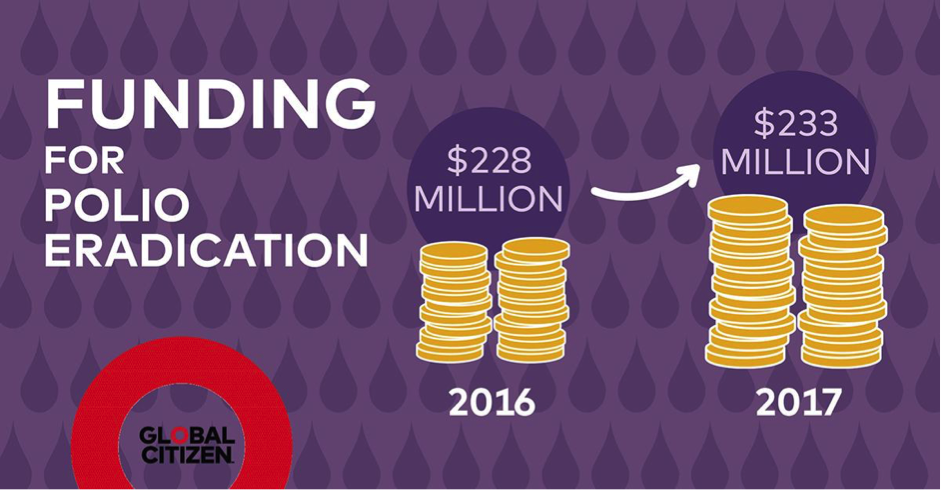 Putting an end to hunger and malnutrition

Further, Global Citizen worked with partners like 1000 Days and Bread for the World to advocate for increased funding for global nutrition programs. Congress approved $125 million in funding for nutrition which represents level funding from 2016. 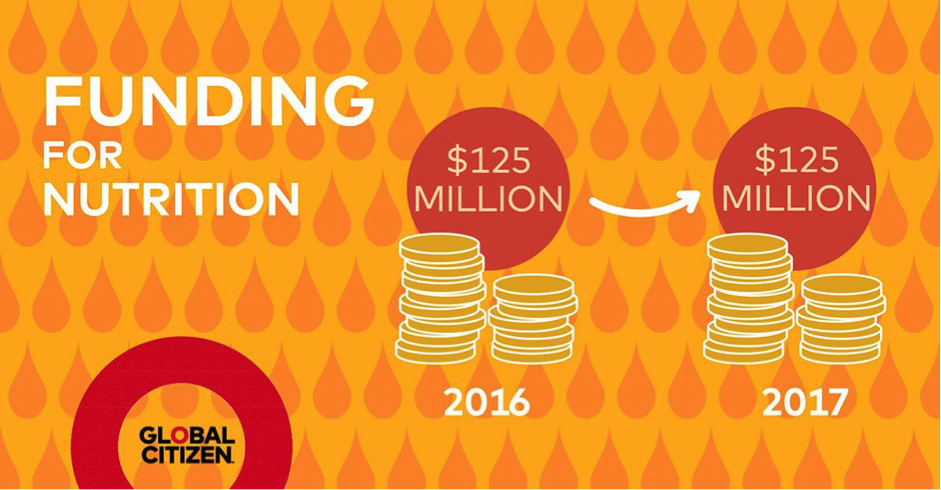 Of course, our work here is far from done. Judging by the Trump administration’s recent budget proposal — which suggested slashing international affairs budget by 28% — we face much more substantial cuts in 2018, to make up for the recommended $54 billion increase in military spending. If realized, this shift in spending could threaten not simply the millions of people it would pull desperately needed resources from, but the stability of the entire globe.