Ladies are gettin in formation and calling their local representatives. 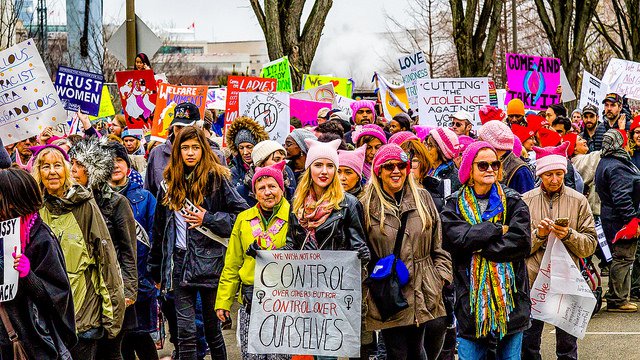 Trump, who riled women with his campaign rhetoric and "locker room banter," has triggered widespread protests after controversial executive orders, including his travel ban on people from seven Muslim-majority countries which he said was necessary to protect the United States from attacks by Islamist militants.

Millions of women - many of them wearing pink cat-eared "pussy hats" in a reference to Trump's boast in a 2005 video about grabbing women by the genitals - protested in the United States and around the world after his inauguration.

Since Trump took office on Jan. 20, the number of women who have contacted an elected official has tripled to 20 percent, and the number who have signed a petition has nearly doubled to 34 percent, according to research by theSkimm, a media company that publishes The Daily Skimm, a current events newsletter.

Immigration has become a top concern among young women, from being one of their least important issues before Trump took office, the Skimm Studies report said.

Trump quickly put immigration at the forefront of his agenda when he issued an executive order last month temporarily banning US entry to travelers from Iran, Iraq, Libya, Somalia, Sudan, Syria and Yemen.

The ban, which prompted protests by tens of thousands of people in US cities and at major airports, has been on hold since a federal judge barred enforcement of the order.

Among millennial women – aged 18-34 – one in five has participated in a march or protest and donated to an organization since Trump was sworn in, the report said.

The results were drawn from a random sampling of the daily newsletter's readers. About 10,000 responded, and about half of them were women 22 to 35 years old. The surveys were taken just prior to Trump's inauguration and again after the travel ban.

A third of the millennial women said they stopped or started supporting a company because of its position on immigration.

Respondents cited Starbucks Corp, which has said it would hire 10,000 refugees over the next five years, and Lyft, a ride-hailing company that pledged $1 million to the American Civil Liberties Union, which has challenged the ban.

They also cited Lyft's rival Uber, which faced criticism for picking up passengers at New York's John F. Kennedy Airport while local taxi drivers were on strike to protest the ban.