'I Am Very Afraid I Will Die Tonight': Young Girl Tweets of Horror in Aleppo

She's asking for the world's attention. She wants the war to end. 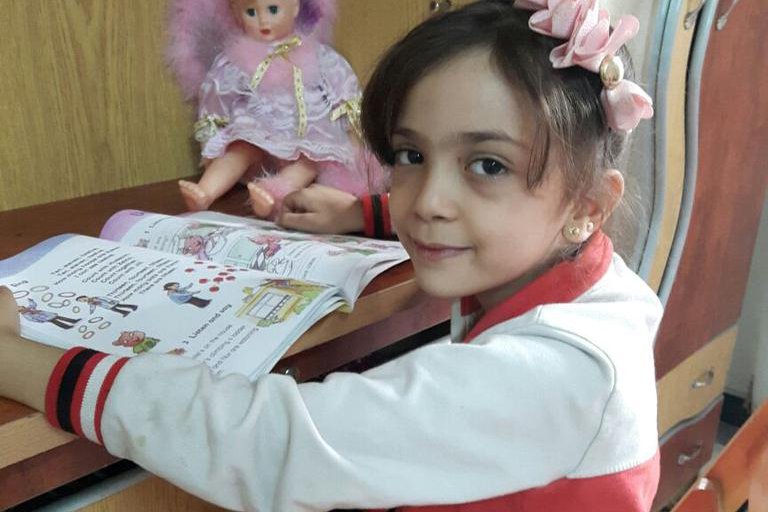 In the heart of the Syrian civil war, a seven-year old girl, Bana Alabed, is literally tweeting for her life.

She tweets about the bombs falling outside her window that shake her building, her neighbors who have died, the books she reads that help her forget, her two little brothers’ coloring books, her friends buried in rubble, her mother’s resilience. Above all, she asks for the world’s attention. She wants the war to end.

Dear world, we are running out of food, hospitals. Dear world, why are you watching this unmoved? -  Bana mom #Aleppo

I... Hate... War. And the world has forgotten us.. Aleppo pic.twitter.com/yeTjREZWmj

She’s stuck in Aleppo, an upside-down city in which hospitals get barrel bombed and pregnant women get sniped from rooftop gunmen playing games. It’s a city where most people do not have running water or electricity and aid convoys keep people from starving. Unless those aid convoys are destroyed by airstrikes. It’s a place from which 250,000 trapped people cannot leave because there is no longer any way to leave — all the routes out are blocked.

Aleppo is the site of the Assad regime's latest confrontation with rebel groups and it is a bloodbath of unbelievable proportions. It’s from this pit that Bana is tweeting to the world, desperately hoping to generate empathy and outrage.

Over the past few months, Bana (with the help of her mom, Fatemah) has gained a large Twitter following and has been featured in media outlets around the world.

But every week or few days, she wonders if this will be her last night, if the war will finally swallow her up. It’s a level of self-awareness that defies her age.

After all, social media attention means little to the family if it does not translate to pressure on leaders who can act to end the war.

In the meantime, the account is unrelenting in its criticisms of Assad and Putin, calling out every war crime, and exposing their duplicity.

You can sense the immense risk the family is taking by so openly condemning the regime. The Twitter account has frequent disclaimers that Bana does not align herself with terrorist groups, that she is just a kid who wants peace.

"We are not terrorists, we are not ISIS, we are not Nusra," Fatemeah told NBC. "We're just kids, mothers, fathers, babies."

Bana, who wants to be a teacher, is unable to go to school because of the war. Her family has stockpiled rice, pasta, and other dried goods during the last failed ceasefire, according to NBC. They are able to charge their phone through solar panels on the roof of their building and use available 3G networks to go online.

Please stop killing us we need peace. I need peace to become a teacher #Aleppopic.twitter.com/mYfF0Zmngv

"The children lost their sense of childhood," Fatemah said. "They forgot what it means to play and go around and visit parks. It is now like a dream for them to go out for the day."

Despite it all, Bana and her mom remain opmistic.

But this optimism, as the family is all too aware, is not guaranteed.