The UK cannot ignore its role in this man-made tragedy. 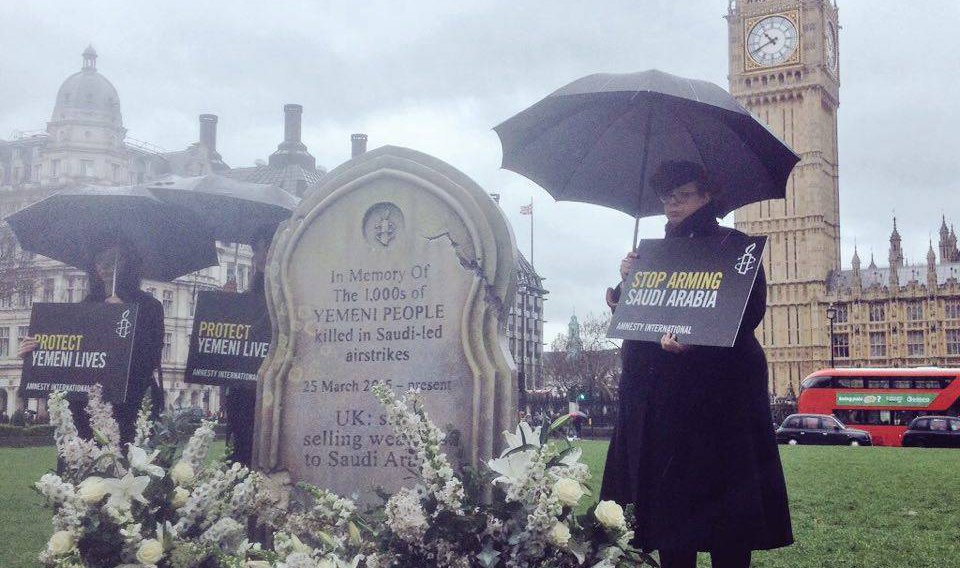 It’s a two-year conflict that, until recently, has largely gone unnoticed in the world’s eyes. But this week, activists from Amnesty International staged a public memorial service for the thousands killed in Yemen’s war, right in the heart of London.

The campaigners erected a six-feet-high gravestone in the middle of Parliament Square to draw attention to the civilians killed by Saudi-led airstrikes, and point to the UK’s involvement in the conflict.

It's raining in Parliament Square, and @AmnestyUK are erecting a 6 ft gravestone to honour the people in Yemen killed by UK-made weapons. pic.twitter.com/VNwtqDmdeZ

More than 10,000 people have have been killed in the conflict, the majority in air strikes launched by a Saudi-led coalition that supports the existing regime of President Abdrabbuh Mansour Hadi against Houthi rebels.

International governments, including the UK, are implicated in the two-year conflict that has left the impoverished Arab nation on the brink of famine.

Read More: Yemen's Famine is 'Beyond the Point of No Return,' UN Agency Warns

In December 2016, the UK’s Defence Minister Michael Fallon told the House of Commons that Saudi Arabia had admitted to using UK-manufactured cluster munitions in Yemen. This revelation had been long-suspected, after Amnesty first began to investigate the use of UK weaponry by the Saudi-led coalition.

“We’re here to remember and pay our respects to the thousands of Yemeni civilians who’ve tragically been killed in two devastating years of Saudi-led airstrikes,“ said Amnesty International’s UK Director Kate Allen in a statement. “Government ministers should long ago have halted arms sales to Saudi Arabia — instead they’ve buried their heads in the sand.”

“There's a UN treaty that says that if you think the arms that you're selling might be used in human rights abuses, you should not sell them. It is very clear,” she told Global Citizen at the event. 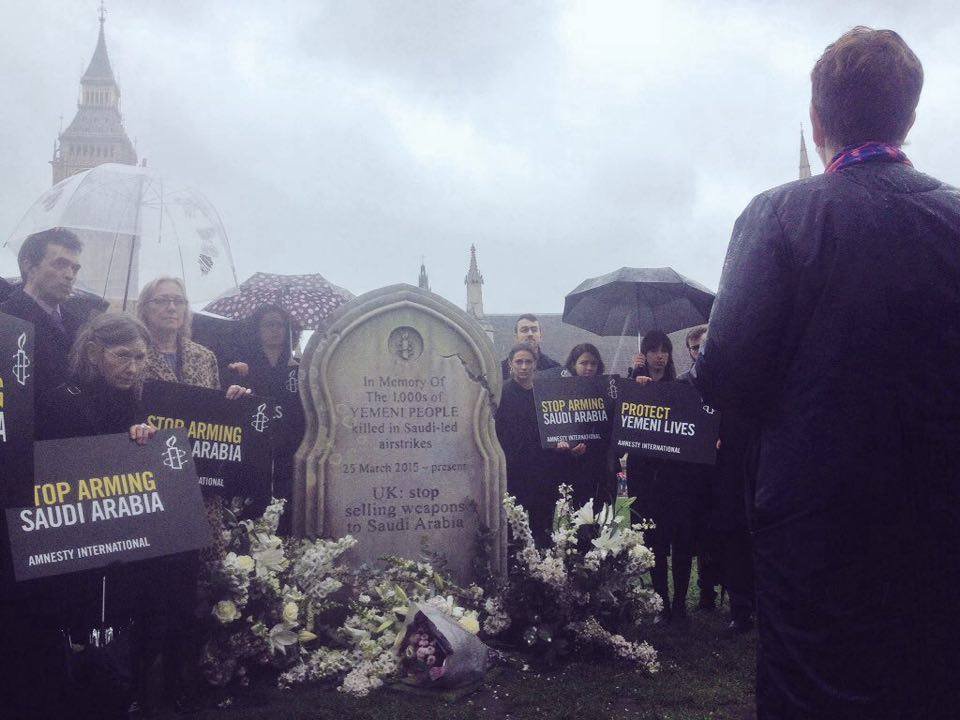 Many have added their voice to outcry against the UK’s reluctance to pull its diplomatic weight against the Saudi-led coalition, and end the sale of arms to the wealthy Gulf state.

Oxfam have condemned the UK’s “calculated complicity,” arguing that the country's current strategy “risks accelerating Yemen towards a famine, putting millions of lives at risk and making a mockery of their global responsibility to those in peril.”

These air strikes do not only add to the daily death toll by hitting civilian populations, they also preventing vital aid from reaching the country’s decimated population. So far this year, three of Save the Children’s shipments of medical aid to Yemen have been disrupted by Saudi-led air strikes.

“These delays are killing children. Our teams are dealing with outbreaks of cholera, and children suffering from diarrhoea, measles, malaria and malnutrition,”  said Grant Pritchard, spokesperson for Save the Children in Yemen. “They are turning aid and commercial supplies into weapons of war.”

Leading Conservatives have added to the pressure on the government. Former Secretary of State for International Development, Andrew Mitchell accused the UK of being “tragically complicit” in this “entirely man-made” famine. In his own words: “Yemen is not starving; it is being starved.”

Read More: The UK Must Be A Global Leader in Foreign Aid, Says Priti Patel

It is a tragedy that it has taken this long for the world to pay attention to the devastation taking place in Yemen. More than 80% of Yemen’s population are in need of humanitarian aid. The UK is currently the fourth largest donor to the humanitarian crisis, in part fuelled by the generosity of the British public. This live-saving aid is vitally important. But along with other governments, it must ensure these efforts are not compromised by its role in the use of arms that put innocent lives at risk — selling weapons to those jeopardising the very lives it is trying to save.