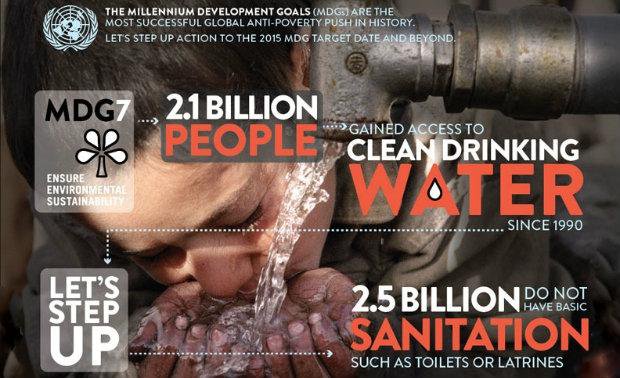 Number 7 on the list of Millennium Development Goals is to Ensure Environmental Sustainability - reducing by half the number of people without sustainable access to safe drinking water and basic sanitation by 2015.
The “Sanitation for All” Resolution was adopted by the United Nations General Assembly in July 2013, and the 19th of November was allocated as World Toilet Day.
While a vast majority of the world's population has access to mobile phones, one third of humanity (2.5 billion people) do not have access to proper sanitation, including toilets or latrines, with dramatic consequences on human health, dignity and security, the environment, and social and economic development.
The lack of improved sanitation largely contributes to the fact that almost 2,000 children die every day from preventable diarrhoeal diseases. It also impacts vulnerable populations such as persons with disabilities and women, who are more exposed to sexual violence. Lack of private toilets in schools is a major reason why girls do not continue their education once they enter puberty.
Poor sanitation and water supply also result in economic losses estimated at $260 billion annually in developing countries.
World Toilet Day aims to change both behaviour and policy on issues ranging from enhancing water management to ending open-air defecation (which 1.1 billion people practice worldwide).
Take action at: http://bit.ly/1bAXeUD
TopicsWaterToiletsSanitation