"The wage gap isn’t just unfair to women. It hurts families. And it hurts our economy." 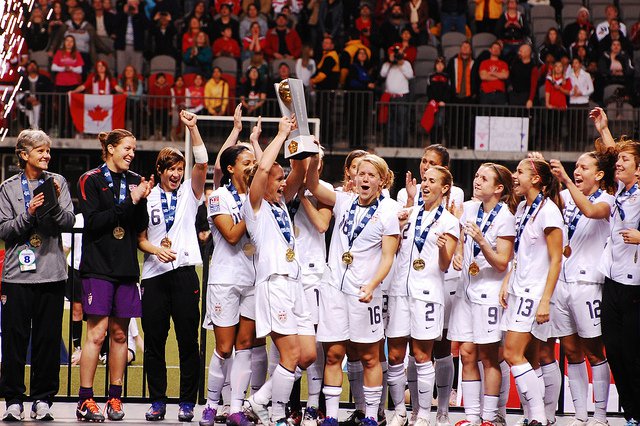 Organizations and companies are taking a stand against the wage gap, including the US national women’s soccer team, which, as the reigning FIFA Women’s World Cup champions, happens to be the best female soccer team in the world.

In March, five players, including stars Carli Lloyd, Alex Morgan, and Hope Solo, filed a federal complaint against the US Soccer Federation with the Equal Employment Opportunity Commission for wage discrimination. The filing cited numbers from the U.S. Soccer Federation (USSF) financial report.

The wage gap exists for all women, but it is substantially larger for women soccer players in the US.

In addition to the gap between the 2015 Women’s World Cup winners and the 2014 Men’s World Cup winners, professional soccer has a huge pay divide in regular leagues. For instance, women in the National Women’s Soccer League earn 98.6 percent less than men in Major League Soccer.

Currently, the US women’s team can earn $75,000 bonuses per player for winning the World Cup, while the men’s team can earn $400,000. Clearly there are some major disparities in earning potential and this drastically affects how many women choose to pursue soccer.

The biggest argument for why women make less is that they generate less revenue than the men’s team, which is simply not true. The 2015 Women’s World Cup received record-breaking viewership, but the women’s team still came in a distant second on payday to their male counterparts.

“The numbers speak for themselves,” Hope Solo, goalkeeper for the US women’s team, told The Wall Street Journal. “We are the best in the world, have three World Cup championships, four Olympic championships, and the [men’s national team] get paid more to just show up than we get paid to win major championships.”

So on Thursday, May 26, the women’s team asked a federal judge for permission to strike over the alleged wage gap — just two months before the 2016 Summer Olympics.

The Associated Press reported that US District Judge Sharon Johnson Coleman, who heard arguments in Chicago from lawyers for the players’ union and for the USSF, didn’t say when she will rule.

Also on Thursday, in a small victory for the women’s team, the US Senate passed a nonbinding resolution to "immediately end gender pay inequity and to treat all athletes with the respect and dignity those athletes deserve."

Women deserve #EqualPay whether it’s in the boardroom or on the @ussoccer_wnt field. Equal pay for equal play. pic.twitter.com/P56xoEqen5

"The pay gap between the men and women’s national soccer teams is emblematic of what is happening all across our country. On average, women get paid just 79 cents for every dollar a man makes. This is at a time when women, more than ever, are likely to be the primary breadwinner for their family. The wage gap isn’t just unfair to women. It hurts families. And it hurts our economy."

Even with this step in the right direction, there is still a chance that Congress will block the resolution. However, women continue to fight for equal pay.

Women in Hollywood have begun to take a stand against the pay gap. Celebrities like Jennifer Lawrence, Charlize Theron and Patricia Arquette have made headlines for speaking out against the gender pay gap and demanding equal pay.

But this is exclusively a women’s issue. Unequal pay impacts families, too.

Research has found that in 40 percent of households, mothers are the sole or primary earner for families. When women are paid less, it can be difficult for families to make ends meet.

Wage discrimination also limits women’s choices, potentially affecting their ability to buy a home and pay for a college education. It also limits their total lifetime earnings, reducing their retirement savings and benefits.

And it’s just flat-out unethical.  Women are not inferior to men and they should not be paid as if they are.

Influential hollywood celebrities and star athletes are joining a movement that is rapidly growing. On screens and in offices, the call for gender parity can be heard. Now reforms have to be made.