Marchers filled the streets of the British capitals this weekend.

More than 100,000 demonstrators turned out this weekend to honour the 100th anniversary of some women getting the vote in Britain.

Marchers filled the streets of Belfast, Edinburgh, London, and Cardiff on Sunday afternoon to remember the efforts of the women’s rights movement of 100 years ago, celebrate their achievement, and remind everyone that there’s still more work to be done.

And in London, an estimated 30,000 women marched together under the violet, green, and white colours of the suffragettes — to create a extraordinary suffragette flag when viewed from above.

Our #PROCESSIONS2018#artwork in full swing in #London. What a view!!! 💜💚 pic.twitter.com/RTrPV8zhQC

What an amazing celebration of 100 years of votes for women! Today, #PROCESSION2018 made history - thank you all for coming 💜💚 pic.twitter.com/kslV80A5Ge 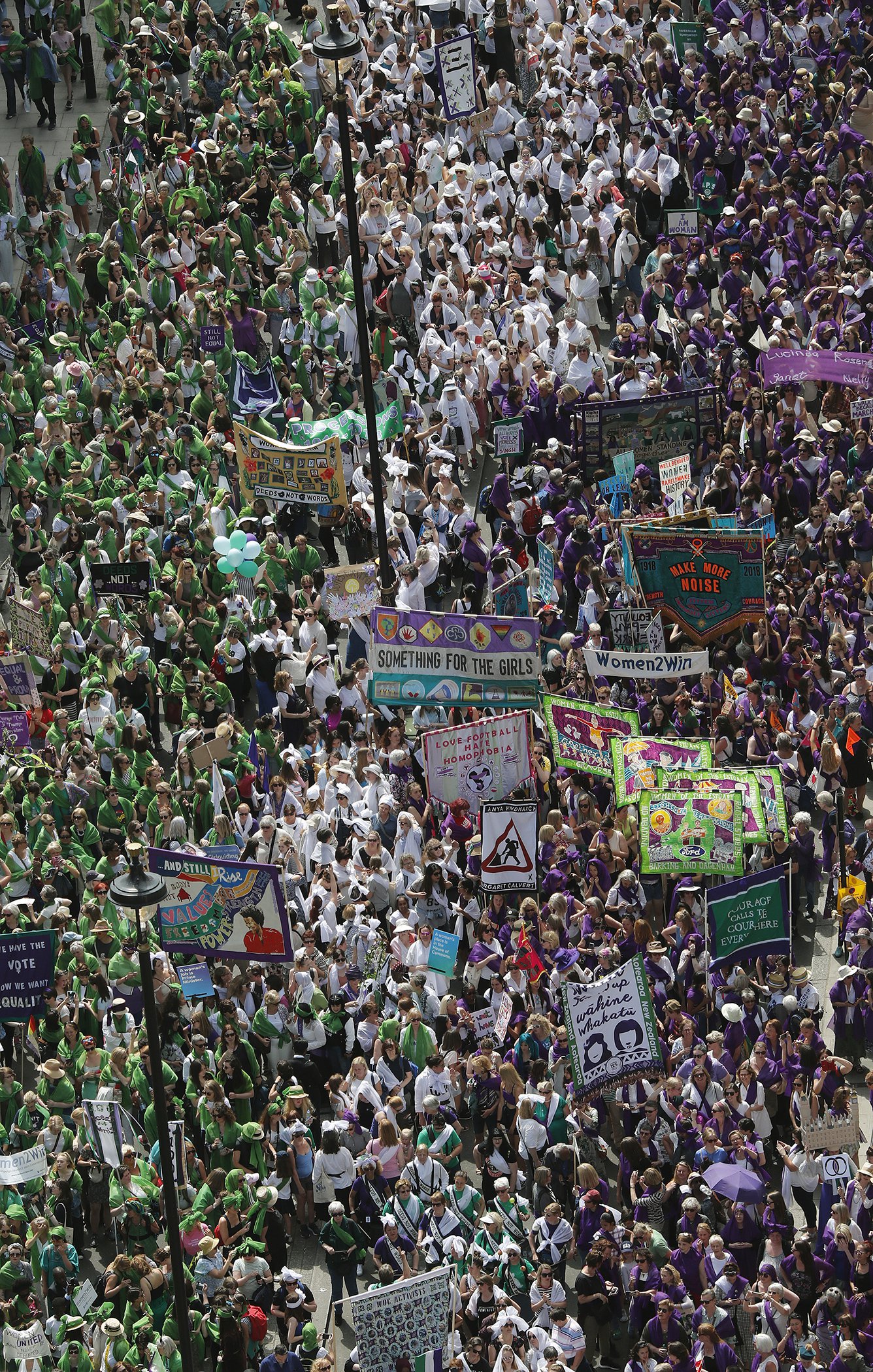 Participants march through the streets to celebrate 100 years since women were granted the vote, in London, June 10, 2018. Thousands of women gathered Sunday to turn British cities into rivers of green, white and violet.
Image: Frank Augstein/AP

Demonstrators arriving for the procession were given scarves in the colours of the suffragettes. They then walked in line to create the enormous suffragette flag.

Banners and protest slogans were once again one of the stars of the day, with many waving banners reading “Votes for women”; “Let’s finish what the suffragettes started”; and “Power into the future.”

Many demonstrators used the opportunity to raise awareness of the threat that gender discrimination still poses today for girls and women across the country: so-called “honour violence,” forced marriage, human trafficking, child labour, domestic violence, and female genital mutilation (FGM), among others.

The processions were coordinated as a mass participation artwork — put together by 14-18 Now, an art programme that connects people with World War I, and another public art charity Artichoke.

The idea of the processions was to offer a “living portrait of UK women in the 21st century,” according to the event website.

Read more: 14 Badass Women Who Fought for Their Beliefs in the Past 100 Years

In total, 100 female artists across the country worked with local communities to make banners for the marches, according to the BBC.

In Edinburgh, the columns of the Scottish National Gallery were wrapped in the suffragette colours. A group of students from Edinburgh College of Art also joined with female prisoners from Cornton Vale to create a communal banner, reading “Every One Is Equal,” reported the Guardian.

In Cardiff, women remembered their predecessors, who marched for three weeks to London to join a demonstration organised by celebrated suffragette leader Emmeline Pankhurst.

The London march ended at Parliament Square, where a statue of suffragist leader Millicent Fawcett has also recently been erected in honour of the centenary.

This year marks 100 years since women over the age of 30, who had property, were given the right to vote for the first time in 1918. 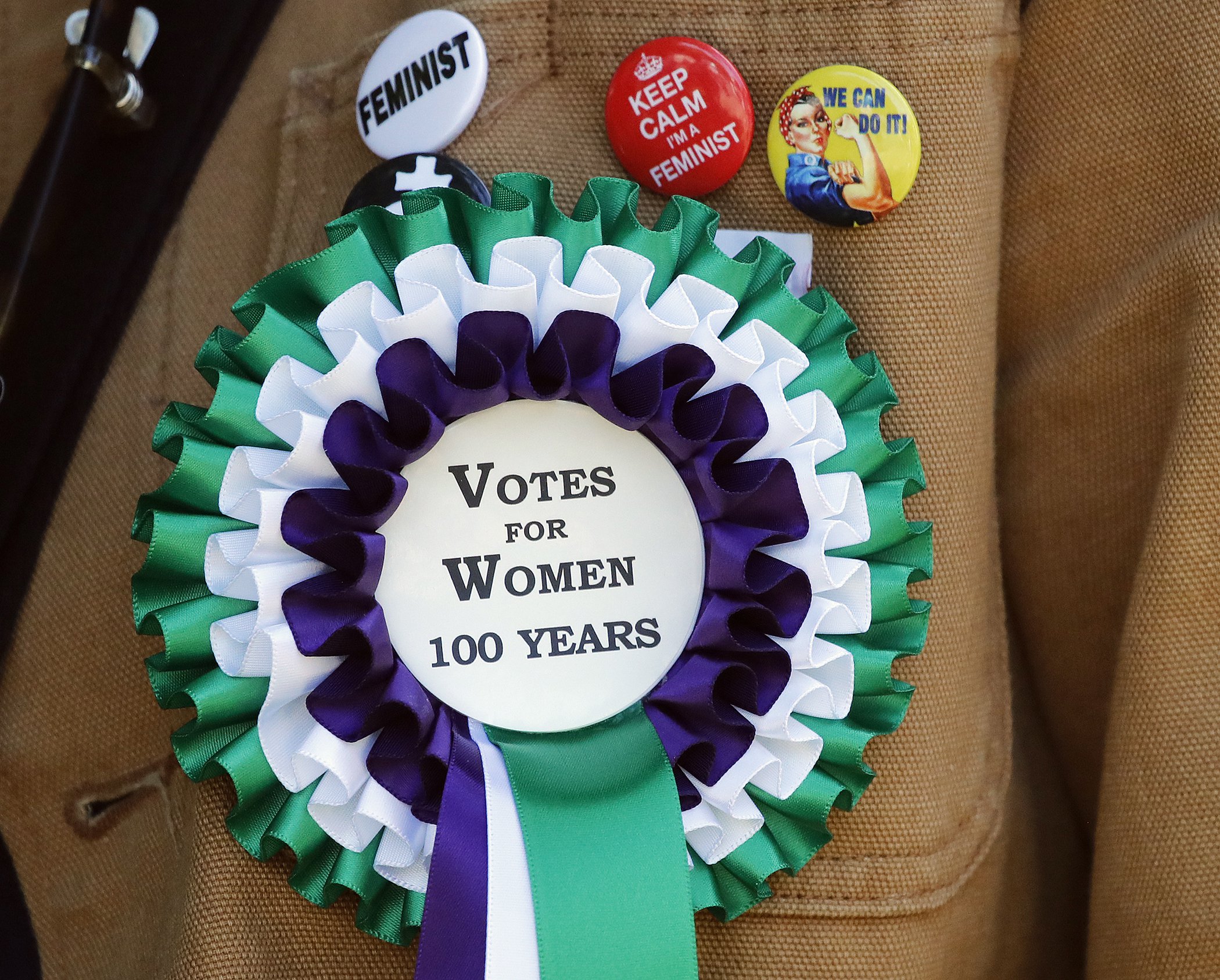 A participant wears a rosette as she takes part in a march to celebrate 100 years since women were granted the vote, in London on June 10, 2018. Thousands of women gathered Sunday to mark 100 years since the first U.K. women won the right to vote.
Image: Frank Augstein/AP

Global Citizen campaigns to achieve the UN’s Global Goals, which include action on gender equality. You can join us by taking action here in support of the #LeveltheLaw campaign, which calls on world leaders to put an end to laws that discriminate against girls and women.