It's not happening overnight, but it is happening.

There's no magic trick to improve gender equality in a society, because it has so many different elements, and they're all important. Some of these elements are equal education opportunities, healthcare access, workplace culture, laws that enable women to own property and businesses, and that difficult to define "respect", where limits aren't placed on the role of women in the community. Some of these things, particularly an ingrained culture of discrimination based on gender, can take decades to gradually unwind. But around the world, there is progress being made. Let's take a look at Colombia, located at the top of South America.

Home to over 48 million people, Colombia has more people than countries such as Spain, Canada, and Kenya. It's a diverse country, featuring the Amazon jungle, modern cities, Caribbean beaches, and snowy peaks. The people are no less diverse - there's a rich tapestry of people with indigenous, European, and African heritage. With sentences like these, it's pretty obvious that this country is one of my very favourites to visit. But it's not 100% paradise - pockets of modern wealth are surrounded by large areas of urban and rural poverty, and there has been long-running conflict in the country which has claimed lives and limited opportunities for people.

As is the case in many developing countries, the role of women in society has been limited. But 25 years of hard work on gender equality is showing genuine results. Activists and campaigners for equality have influenced the state’s response to addressing the legacies of the conflict. Since 1990 there have also been important achievements in women’s empowerment in terms of political voice, access to decision-making roles, and capacity to shape law and policy on gender equality.

Also, more Colombian girls than ever before are getting a good education, participating in the workforce, and are more empowered in family planning. Check out this great infographic from ODI. 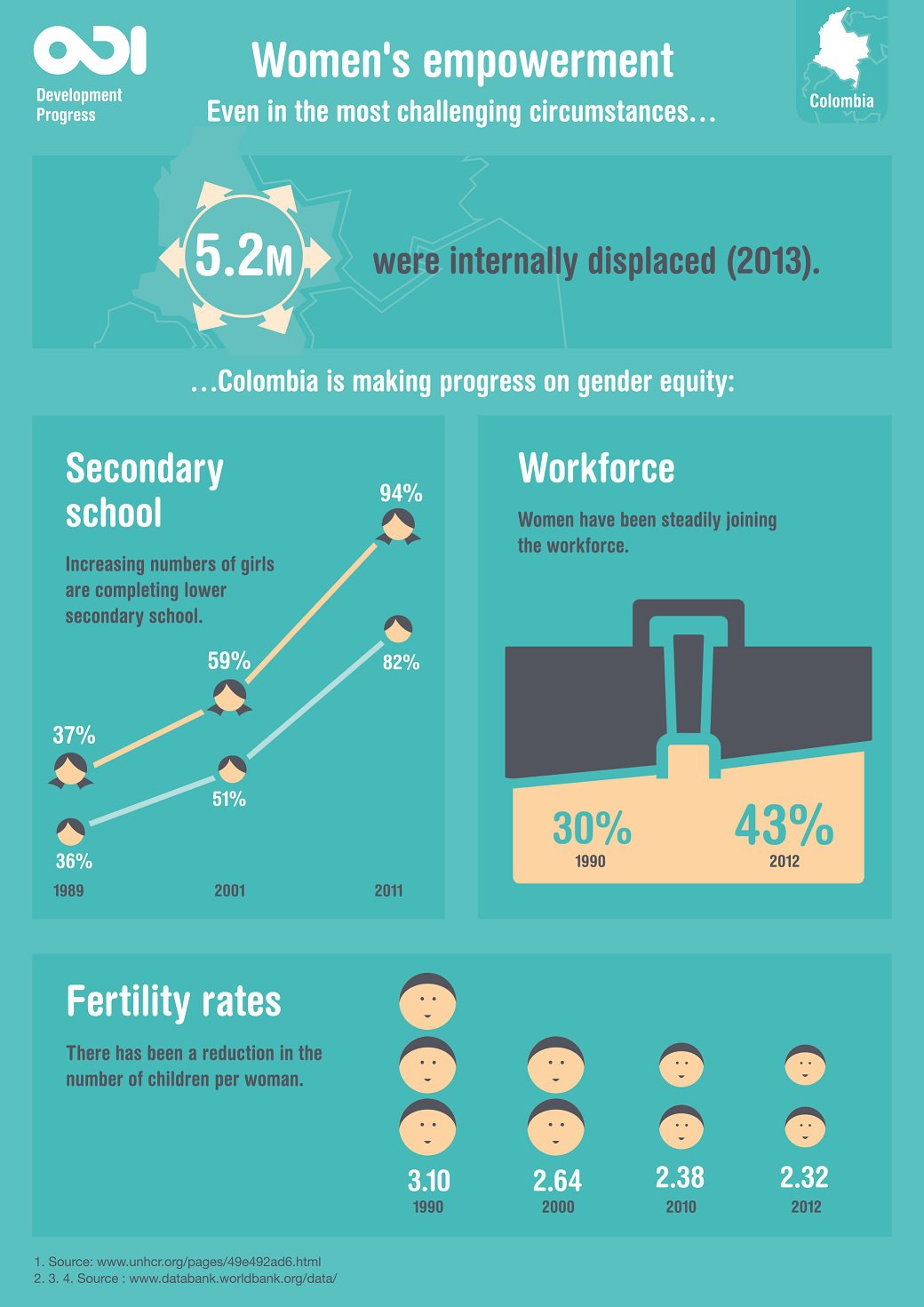 Where do we go from here?

It's so good to see progress like this. It's the sort of progress that will enable more and more people in Colombia to develop their potential, and be fully involved in their communities. It's not just about women - everyone benefits when talent is harnessed. It's evident at the highest levels in Colombia. In 2011, 32% of the government's cabinet were women, compared with 12% in 1998; in 2014, 19.9% of parliamentarians in the Lower House and 22% in the Senate were women, compared with 11.7% and 6.9% respectively in 1997.

But there's plenty more work to do.

Progress in gender equality has been uneven. For the most part, it is well educated and urban women who have been able to benefit most from the gains made, while women in rural areas, who are often poor and illiterate, continue to lag behind and are also much more exposed to the risks of gender-based violence, discrimination and displacement. The development work done by NGOs and community groups can extend basic opportunities to women and girls who are still missing out, and government programs to foster equality need to continue.

But that said, Colombia is a really good example of a developing country getting serious about gender equality. It doesn't need to be the sort of thing that has to wait for after a country is peaceful and prosperous - improving the role of women and girls can be a key engine of getting a country there in the first place.