Will the G7 make a down-payment on ending hunger?

The summit in two weeks is a test of vision and political will.

Negotiations around new sustainable development goals have consumed a huge amount of attention among experts, economists, and the international development community in general for the last two years.  For better or worse, the negotiations will conclude and the SDGs will be launched in New York in September. Some gluttons for punishment are now turning their attentions to the critical question of how these goals will be financed and who will do the paying.  An important international conference on this question will happen in Addis Ababa in July.

But before September and even before July will come a test of how seriously political leaders take the SDGs and whether there is any real juice behind them.  That will be at a grand resort hotel in the Bavarian Alps: Schloss Elmau.

The idea would turbo-charge SDG 2, which – although still in draft form – commits the world to end hunger and to achieve food security and improved nutrition by the year 2030.

Hunger and malnutrition are declining and important progress has been achieved over the last 25 years.  The UN FAO announced yesterday that the number of undernourished people has fallen below 800 million, down more than 200 million since 1990. 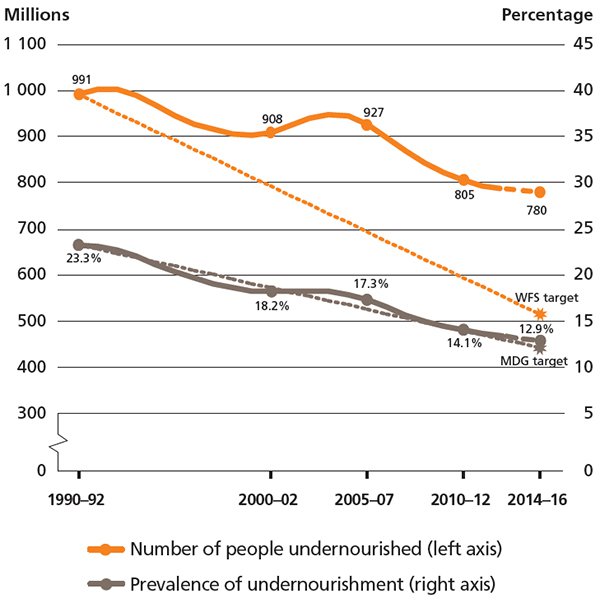 But ending hunger and malnutrition by 2030 will be a challenge and won’t be accomplished without additional effort.  This is where the G7 commitment comes in.  Taking responsibility for driving down hunger and malnutrition by 500 million fewer people is a significant contribution.  The proposal suggests a reduction of 200 million undernourished and a reduction of 300 million who lack micronutrients.  Some very rough, back-of-the-envelope estimates indicate this would be reduction of 30 percent of global burden of undernourished people and people who lack micronutrients compared to a business-as-usual scenario.  That’s big, but not disproportionate.  The G7 represent roughly 50 percent of the global economy.

Germany has put this proposal on the table for G7 leaders to consider.  In papers that have leaked out, it’s apparent that there are many details to be worked out – including how much this would cost.  But the vision is clear and compelling – even inspiring.

The rumors are that other G7 countries are balking, raising concerns, pleading poverty.  It’s not hard for negotiators to find faults, problems, and technicalities.  But the proposal is still alive.  Negotiations are ongoing.  In two weeks, we’ll see if the G7 countries are willing to put their names behind a serious down-payment on achieving SDG 2. If they do, it will be an historic moment and blow wind in the sails of FFD, the SDGs and the other big convenings this year.

If the G7 fails to coalesce around this proposal, it will be a reality-check on how serious global leaders are about the global project to end poverty, improve health, and create a more just world.