Will educate girls for food: a plan to fight poverty and illiteracy is helping Egypt

Every month they go to school, they bring home rations that their families can rely on. 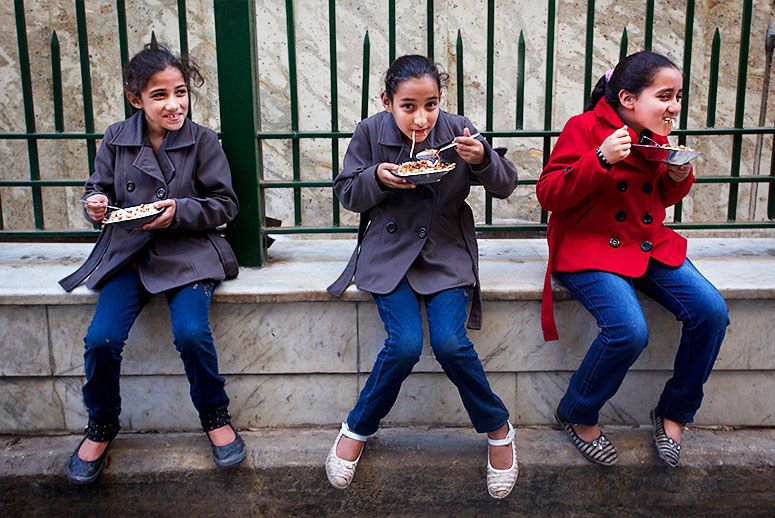 The United Nations World Food Programme has been providing food to kids in Egyptian schools since 1968, but in April it began to focus its efforts on children who are most at risk of entering the labor market. In some of the poorest and most remote areas of the country, a high-energy date bar awaits each student who makes it to class. More school, more food.

The date bar students get each day in the classroom provides 25 percent of their daily nutritional needs. Students who attend 80 percent of school days per month take home rations for their families, including 10 kilograms of rice and one liter of oil. Since April, nearly 24,000 children have been given food aid in this four-year, $65 million project funded by the European Union. The goal is to reach 100,000 children in Egypt’s poorest areas.

“In those rural and remote areas, girls’ education is not a priority for the families,” explained Amina Al Korey, communications officer for the WFP in Egypt. Public schools are far away, and if they are reachable by foot, the walk is seen as unsafe for girls.

Safety may be a concern, but patriarchal values also play a role.

“The concept they have is the girl is going to get married and stay home, so if they need to get one of their children educated, they’re going to focus on the boys,” Al Korey said. “With our project, we focus on the girls because we feel we are their chance to get an education.”

In Egypt, 15 percent of children end up working to help support their families. The take-home rations available to children with good school attendance equal the value of what they could earn in a month of work, leaving little reason to keep a girl at home.

Girls get first priority registering at the one-room community schools that are supported by the WFP and under the supervision of the Egyptian Ministry of Education; if any available spots remain, boys are admitted.

“Whenever I speak to the girls, they’re always just so enthusiastic about actually going to school,” Al Korey said. “They don’t just feel good about getting an education and getting a chance to take a different path: ‘Maybe I’m not just going to get married and have kids and raise them. Maybe I can actually become someone.’ They’re also helping their family out.”

The mothers of the children benefit in ways that will last longer than a monthly ration. The WFP plans to provide 50,000 mothers with training and support to start income-generating projects breeding goats, selling vegetables, and making soap and detergent, which Al Korey called the sustainability aspect of the program.

“I’ve seen a mother who started off selling tomatoes and cucumbers, and that was it. Now she sells vegetables and fruits, and she has her regular customers. She’s doing quite well. It’s great to see the mothers be able to rely on themselves instead of sending their kids to work,” she said.

One-quarter of Egypt’s 86 million people live below the poverty line, and education is one way to curb that ill. In Africa, boys are 1.55 times more likely than girls to complete a secondary education, the World Bank found. “The girls were never on the map,” said Al Korey.

So, Why Should You Care? Put a girl in school, and the ripple effects are far-reaching. Girls who go to school can make up to 25 percent more in wages later in life, and when a woman earns money, she will reinvest 90 percent of it in her family. She is healthier, and so are her children. At least 12 million children—a quarter of the world’s population of malnourished children—could be saved from malnutrition if women in developing countries were given a secondary education.

The benefits are obvious, and they can begin with a date bar.

Of the students at Egypt’s community schools, especially the girls, Al Korey said, “Sometimes when you don’t have the opportunity to do something for so long and then someone just gives you that chance, you want to grab it and do the best you can.”

Sarah McColl has written for Yahoo Food, Bon Appetit, and other publications. She's based in Brooklyn.