The best part? Rigs create life rather than attract it from elsewhere in the ocean. 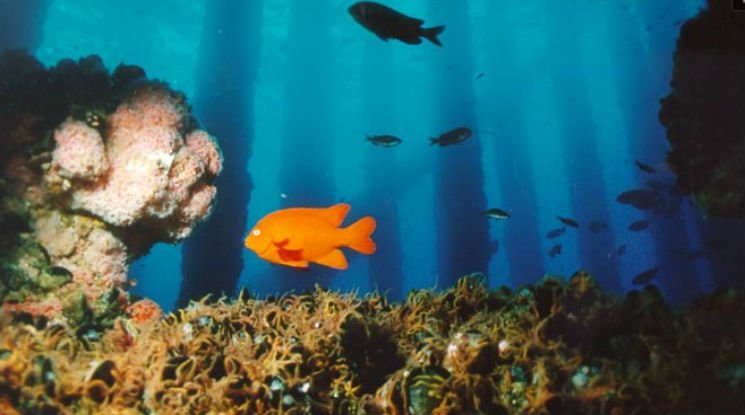 Oil rigs are cast as enemies of the oceans and that's a fair label.

They're hulking structures of metal that stretch to seafloors to ocean extract oil. Ripping oil from the Earth is always dangerous, but being out at sea increases the risks. When (and it’s usually a matter of when, not if) oil rigs spring a leak, then large areas of ocean quickly become polluted and entire ecosystems can be disrupted.

So how can they possibly be better than coral reefs?

Well, once an oil rig loses its value (i.e. its ability to extract oil at a profit), it gets abandoned. After a certain period the owner of the rig is legally required to dismantle it and plug the extraction holes. This can cost more than $1 billion USD.

In the period between an oil rig losing its value and it being dismantled, though, something amazing happens: the rigs become sanctuaries of marine life.

They become the perfect habitats for fish and other sea life, according to The New York Times. They are more productive than both estuaries and coral reefs.

This is because the structures are durable, stable and complex. They provide maximum surface area for biological growth and attachment of benthic organisms (ex: sponges), can withstand extreme storms and provide much-needed shade to organisms.

It looks like just another offshore oil rig. Until you take a dive. https://t.co/dx2mMAppo0pic.twitter.com/gWR5uEDvHR

And the best part is they create life rather than attract life from elsewhere in the ocean, according to the marine biologist Milton Love. This is not to suggest that coral reefs are somehow less important. Coral reefs are absolutely essential to the health of oceans. The world has already lost 27% of its coral reefs from human activities. Reefs occupy less than 1% of the oceans, yet house 25% of all marine life.

Transformed rigs can be helpful in making up for what has been lost.

Rig-to-reef programs have already been around for some time. Throughout the Gulf of Mexico, for example, more than 400 decommissioned rigs serve as vibrant ecosystems.

But in California the idea has been controversial. Opponents say it encourages more drilling and gives oil companies a new marketing ploy.

To some, the rig-to-reef idea is also an ugly symbol of all the pollution that has occurred over the years.

Since then, many other leaks have hardened the resolve of environmentalists who are determined to see these rigs removed for good.

But supporters of the rig-to-reef program say that the program is a way to rewrite the disastrous legacy of oil by restoring marine life and generating substantial revenue.

Some people have proposed that oil companies pay half of what they would have paid to remove a rig to local governments for conservation efforts. This would rejuvenate underfunded marine preservation programs.

The rigs would also attract tourism because of the astonishing beauty of the mini ecosystem. The large pillars become cloaked in colorful marine life and schools of fish zip about.

“Just beneath the surface at the Eureka rig, sea lions prowl in the crystal clear waters; half a dozen species of rockfish and bright orange Garibaldi swim in the swift currents; and florid carpets of invertebrates and crustaceans cling to the rig’s pylons.” - The New York Times

Oceans around the world are under attack from overfishing, acidification, pollution and other factors. By 2050, some scientists estimate that plastic will outnumber fish in the waters and many fish populations will entirely vanish.

In such a climate, any effort at conservation should be seized, even if it means transforming a symbol of environmental destruction into something beautiful.