A new report measures freedom around the world 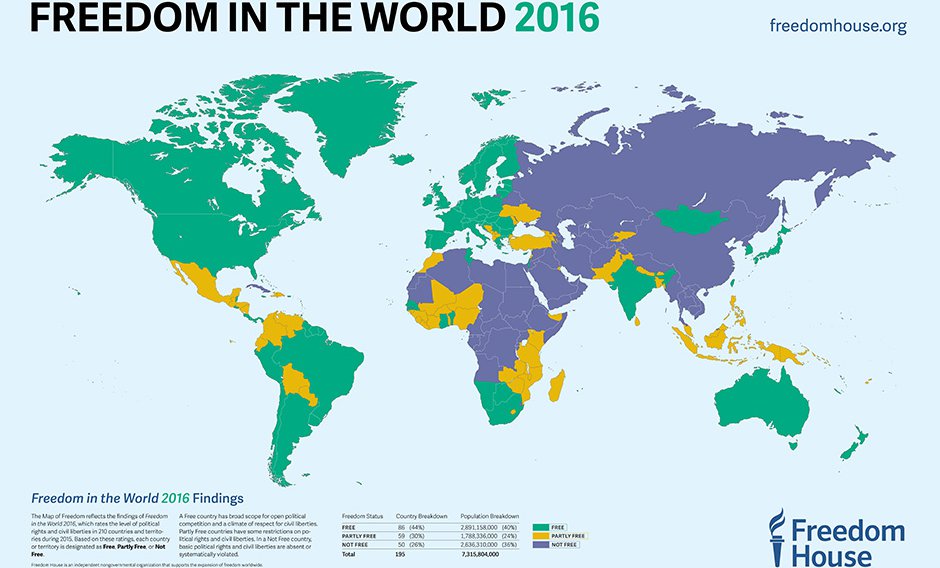 Earlier this week, Freedom House released its annual flagship report detailing freedom around the world, as measured by the civil rights and political liberties enjoyed by people. The result was somewhat distressing. 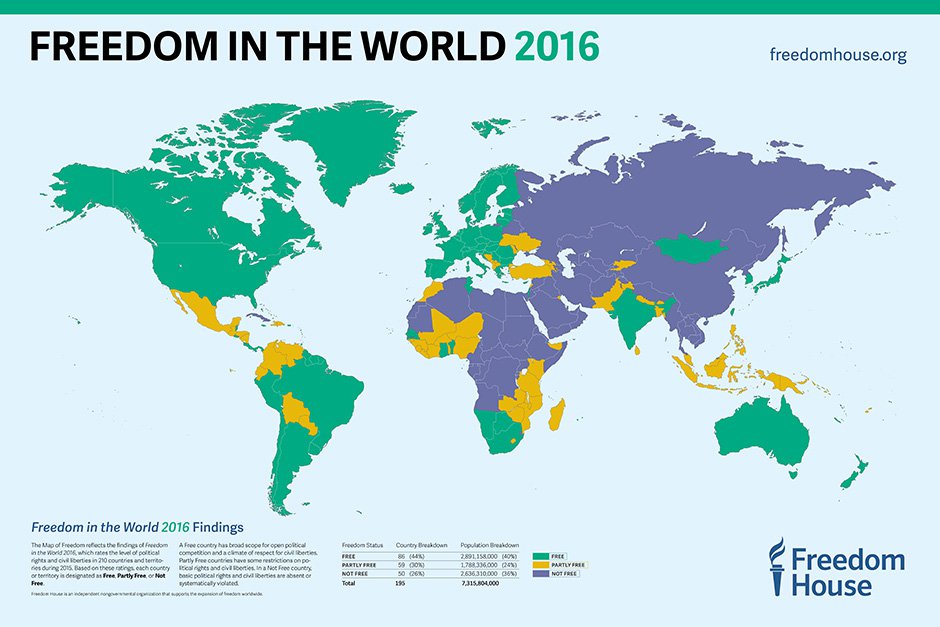 Freedom House offers a few broad explanations why freedom is seemingly under so much stress this year. The biggest reason is the overwhelming pressures brought by the global refugee crisis. The crisis has exacerbated tensions in the Middle East, causing some countries in the region to clamp down on migration more than usual. But beyond the Middle East, the refugee flows to Europe have caused a xenophobic reaction and some countries are now placing onerous restrictions on migrants and refugees, often in contravention of these governments obligations under international law and the Refugee Convention. Added to this are stresses caused by the terrorist attack in Paris and certain restrictions on civil liberties that some countries passed in the wake of the attacks.

But beyond the refugee crisis, the global economic slowdown, particularly in China, are causing more authoritarian countries to clamp down on dissent. With economies of some authoritarian, oil-exporting countries in Africa teetering on the edge, dictators are cracking down.  “Anticipating popular unrest, dictators redoubled political repression at home and lashed out at perceived foreign enemies,” says the report. 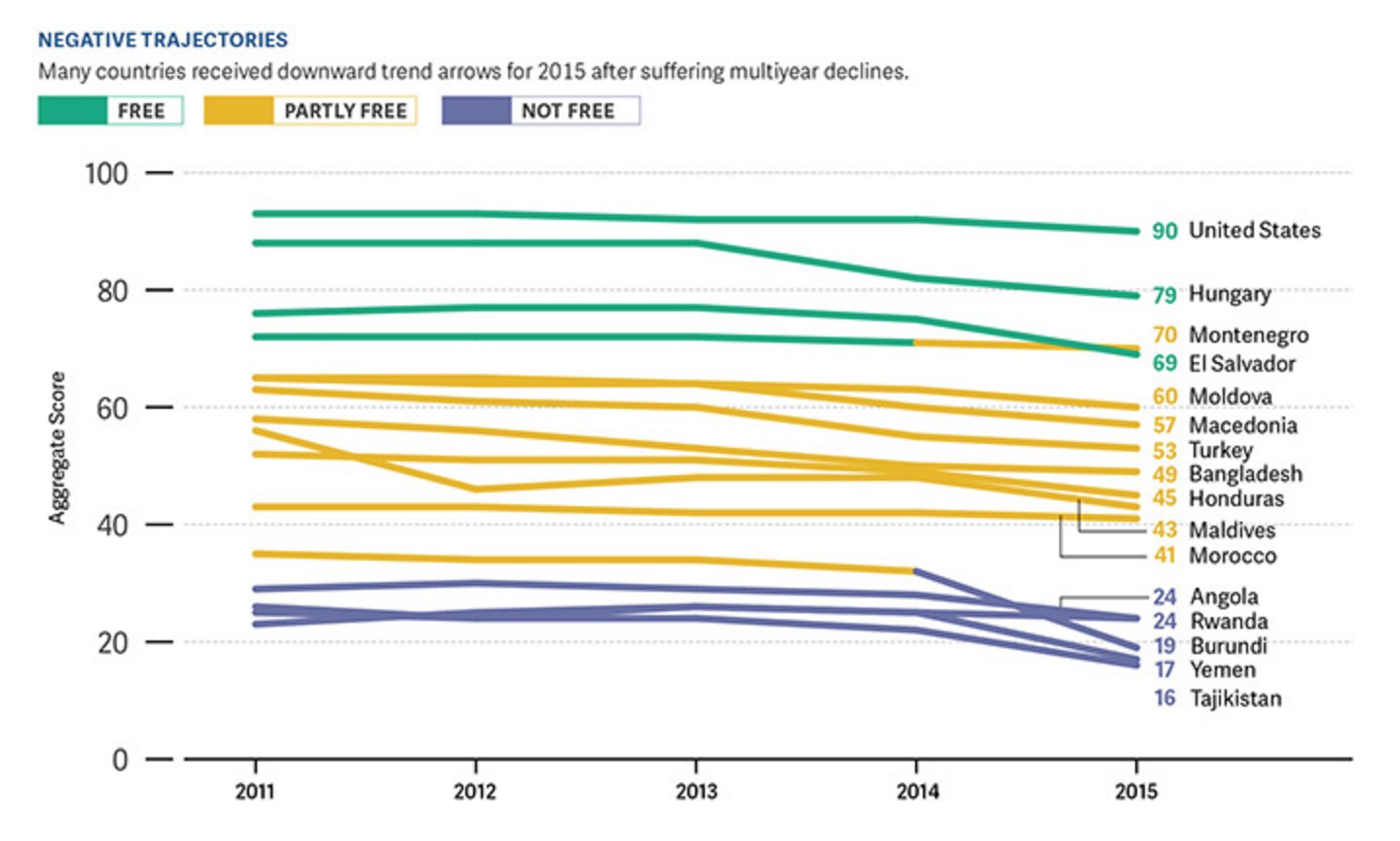 But it's not all bad news! There are some bright spots, such as Nigeria. Even though Nigeria is a major oil exporter and also in the midst of a violent Boko Haram insurgency the country held a hotly contested, yet peaceful and fair election in 2015. That’s nothing to sneeze at. One in five Africans are Nigerian, so advancements in Nigeria pull the aggregate number of people living with greater freedom in the right direction. The report also singles out Myanmar for holding contested elections that swept the party of Nobel Peace Prize laureate Aung San Suu Kyi into power. 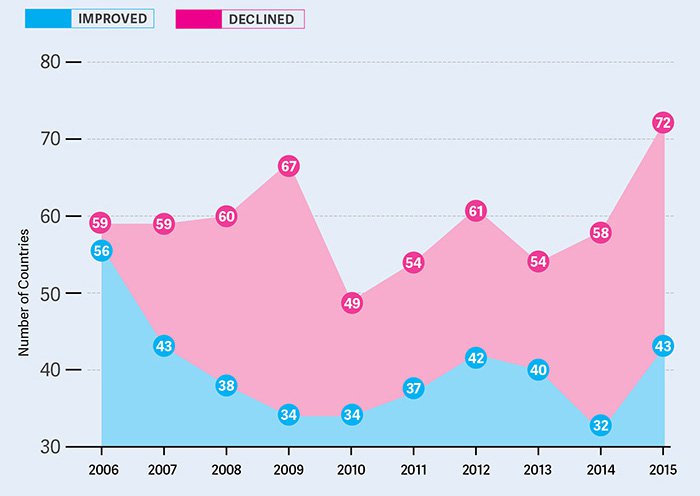