What will it take to end polio in Afghanistan? Q&A with Dr Parwiz

Polio is closer than ever to being eradicated for good, but there are still steps to be made.

On Wednesday this week Afghanistan introduced inactivated polio vaccine (IPV), a new shot to better protect its children from polio. We spoke to Dr Sardar Parwiz, Acting National EPI Manager, about what this means for Afghanistan and global polio eradication. 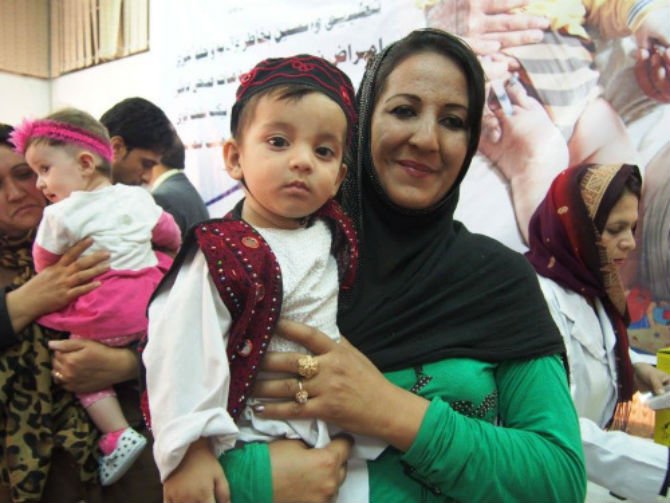 Lailuma holds her son Mohammad at the launch of IPV in Kabul on Wednesday.
Image: WHO Afghanistan/ S. Ramo

What do you think are the key challenges for vaccinating children against polio in Afghanistan?

The important Issue is we have “missed children” who are not getting vaccinated against polio in every round. This makes the immunity of the community low and the virus will get the chance to survive and cause paralysis in the affected child. Polio eradication demands 100% children to be immunized in every round in addition to routine doses.

There are multiple challenges we face to reach all children. Some are contextual and some are programmatic. The contextual being inaccessibility due to insecurity concerns, and poor awareness among the parents due to low literacy and other factors. Programmatically, we need volunteer vaccinators and community mobilizers hired during the campaign period.

Training and ensuring proper administration, plus monitoring of few of the areas is difficult. The children usually missed during the campaign were due to being in transit, newborns, and sick children but very few are due to refusals.

How are these challenges being overcome?

Inaccessibility issues are being addressed with Local Access Negotiators system, when typically members of difficult to reach communities are recruited to help get vaccines to all the children within it.

Programmatic concerns are tackled through close monitoring and ensuring quality training and vaccine delivery through monitoring. Demand generation and social mobilization activities are done through an army of community mobilizers with support of UNICEF.

We have innovative methods like polio permanent teams - locals responsible for vaccinating children in a specific community several times per year - and teams to cover children in transit.

We also still have system of tracking newborns, which we use to find and immunize missed children.

How does the introduction of inactivated polio vaccine (IPV) fit into this? Why do you think it’s important for Afghanistan?

It’s part of the global plan to secure a lasting polio-free world – the Polio Eradication and Endgame Strategic Plan 2013-2018.

By introducing IPV into routine immunization, and using it alongside oral polio vaccine (OPV), children in Afghanistan will be better protected from all polio disease, and eradication of remaining strains of wild poliovirus transmission will be accelerated.

Introducing at least 1 dose of IPV will ensure that a substantial proportion of the population is protected against type 2 polio after OPV type 2 withdrawal. It will also boost immunity to the remaining type 1 and 3 poliovirus serotypes. IPV introduction sets the stage for ending OPV use entirely in 2019-2020.

All this is especially important for Afghanistan as one of the last two countries where polio is endemic.

How has Afghanistan been preparing for the introduction of IPV?

We planned the IPV introduction a year ago, developed a roadmap and formed an IPV introduction committee under the leadership of a senior adviser. Three sub committees were formed – vaccine logistics and cold chain, training and communication.

Vaccine procurement and distribution was done already a month ago. Trainings were conducted with cascading to the vaccinators. Communication messaging and TV and radio spots were prepared and broadcasted. I would say it was well planned and executed.

What does the future hold for polio elimination in Afghanistan?

Lots of activities and interventions are underway both for polio eradication and routine immunization, such as improving the quality of national and sub-national immunization days, involving community health workers and better engaging communities, and expansion of centers where vaccines are delivered.

Collaboration with Pakistan is also happening, and will be continued in all aspects of polio eradication, including synchronization of campaigns, social mobilization and advocacy efforts, and cross-border vaccination.