What does the world’s richest person have to do with ending extreme poverty?

The surprising link between the most un-poor person, and people in poverty

On first glance, it seems like an odd situation. The richest person in the world is essentially the “least poor” person in existence, yet we’re talking about extreme poverty. But stay with me here, because this is an interesting story. And what’s more, I rounded up some surprising bonus facts to show you at the end. Ok, I'll cheat. One of the surprising Bill Gates facts at the end is that he's doing a live Q&A with global citizens next week, and you can watch it live on the Global Citizen Facebook page (more details at the bottom). But no more cheating, it's story time!

William Henry Gates III, more commonly known as Bill Gates, is a 59 year old American who co-founded Microsoft back in 1976. To put it mildly, Microsoft turned out to be quite a successful business, and Bill Gates became a wealthy man. Microsoft Word, Internet Explorer, PowerPoint, Windows, Xbox, Skype – all household names today, and all Microsoft.

But Bill stopped working full time at Microsoft back in 2008, and stopped being the company’s chairman in 2014. His title at the company is now “technology adviser”, which gives him more time for other things. And as I’ve already mentioned, money isn’t a problem, either. If Bill Gates wants a side dish to go with his lunch, he can afford it.

So what does a man in this situation do? Options galore, really, including sitting around and doing very little. But not in Bill’s case, because he’s decided to dedicate himself to stamping out extreme poverty.

Bill and his wife Melinda started a charitable foundation 15 years ago, which is helpfully called the Bill & Melinda Gates Foundation. By 2005, the two of them had been named Time magazine’s people of the year due to their charitable work. Bill didn’t reduce his time commitment to Microsoft because he was sick of Microsoft, he did it so that he’d be able to spend more of his time helping people to overcome some of the biggest challenges facing the world.

Once again, at first glance, the richest man in the world could help to end extreme poverty by giving his money away to people in poverty. With a net worth of close to US$80 billion, each and every person living in extreme poverty could receive about $67. That amount of money would make life better for a few weeks, but it’s not too likely to represent a permanent solution for many people. To make an enduring impact on the lives of the 1.2 billion people living in extreme poverty, it’s important to find critical projects and initiatives that have the capacity to trigger a domino effect of change. And then fund the toppling of the first domino.

The foundation did its homework, and concluded that it could be most effective by looking for influential dominos in areas like family planning, water and sanitation, diseases, and agriculture. The most impactful thing to do can vary – maybe it’s investing in research for a clean and simple toilet, maybe it’s providing malaria nets, maybe it’s by funding the creation of a monitoring system for diseases in remote communities. 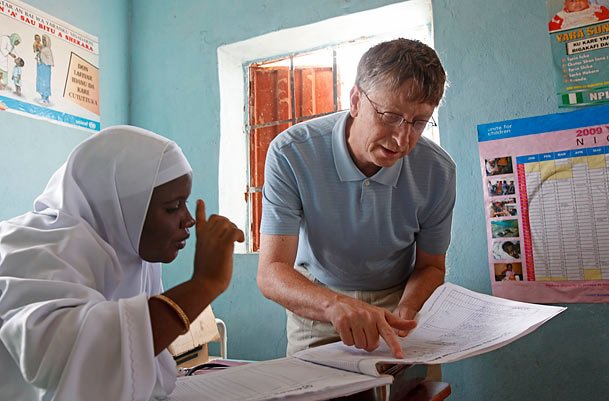 The big picture idea is to remove the obstacles that stand in the way of communities and countries lifting themselves out of poverty. It’s better than throwing a giant sack of money out of a helicopter, and it can have a greater long-term impact. Through the foundation, Bill Gates has contributed over $28 billion to combat poverty. And other very wealthy people have followed Bill’s lead, for example American investor Warren Buffett has personally contributed over $15 billion to the Gates Foundation. Decent!

Over the past two decades, Bill Gates’ work has made him one of the world’s most informed and influential voices in aid and development. The support of the Bill & Melinda Gates Foundation has enabled new innovations, new solutions, and new partnerships between communities, governments, and the private sector. Sure, Bill Gates changed the world by spearheading the personal computer revolution in the 1980s and 90s, but what he’s doing now is going to be remembered as even more significant.

Bill Gates is a global citizen in the true sense of the word. He's made the effort to get informed, and is going to great lengths to use his voice to push for the end of extreme poverty. But this isn't just the sort of thing that the very wealthy can do - everyone can do it. You can be a global citizen just like Bill Gates by being a part of the movement to end extreme poverty. Whether that's sharing information to your friends, calling on political leaders to take action, purchasing ethically produced products, or something else, what you do is important.

But I’m not going to wrap up this story there, because I haven’t yet told you some wacky Bill Gates facts. Let’s do this.

- Favourite band is Weezer, also partial to U2.

- Drank ‘reclaimed water’ made from feces and in early 2015 challenged talk-show host Jimmy Fallon to do the same in order to raise awareness of solutions to issues of sanitation.

- Is an Honorary Knight Commander of the British Empire

Here at Global Citizen, we’ve got lucky. Bill Gates is going to be visiting London on Tuesday June 23, and he’ll be making some time to talk about what it means to be a global citizen, and how people everywhere can help to end extreme poverty. As one of the most important people in the world today, I’m really looking forward to heading what he has to say.

But it gets better – Bill is going to be answering questions submitted by global citizens, and the whole thing is going to be streamed live (and watchable later) via the Global Citizen Facebook page! Don’t miss out on this one – it’s going to be great.

You can find out more about the Bill Gates Q&A event, and register here!
TopicsFinance & InnovationBill GatesArticle